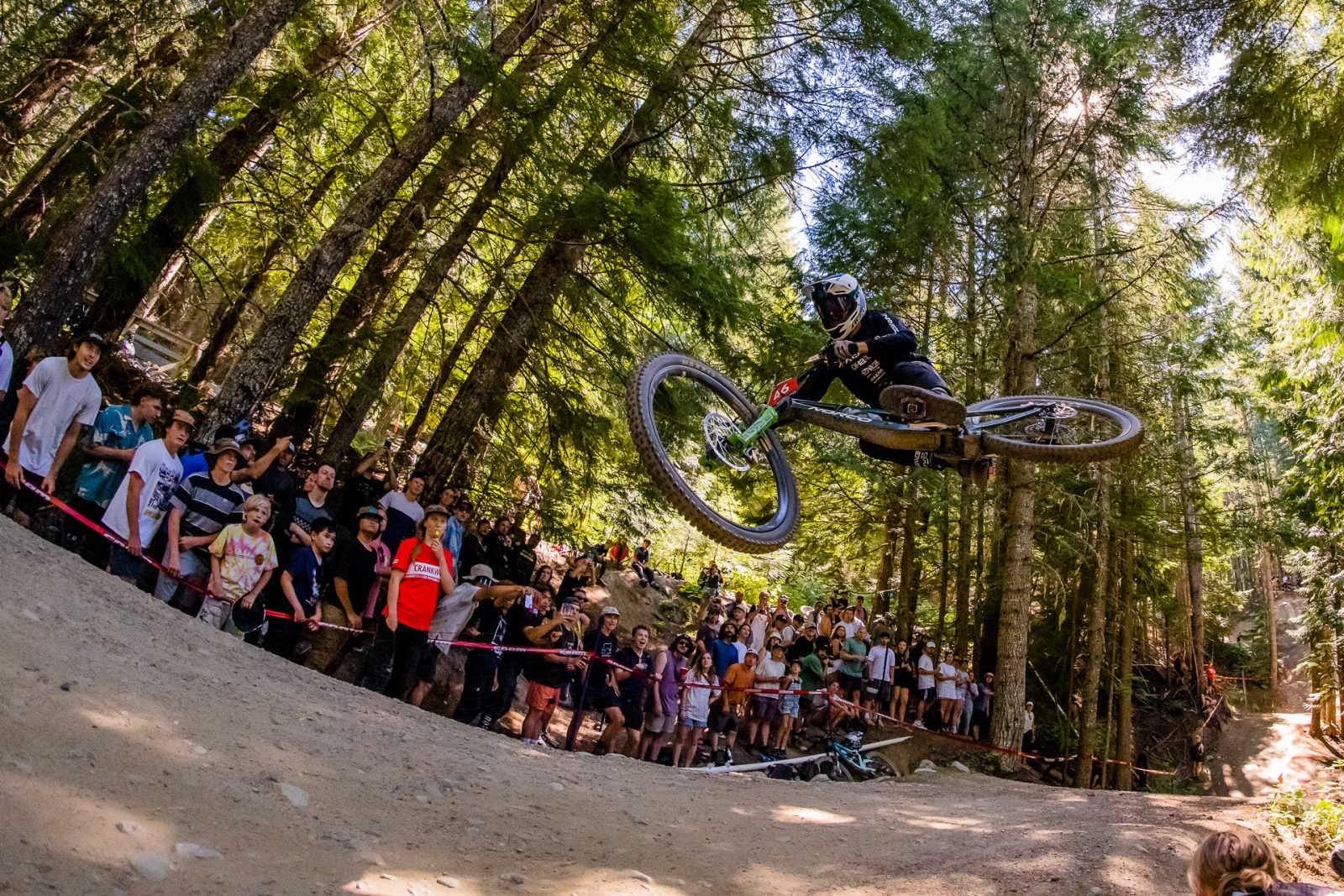 In a race best described as ‘party vibes on fire’.

WHISTLER, B.C., August 8, 2022 – Three days into Crankworx Whistler, the enduro racers have had their fun; now it’s time for the best of the rest with the return of the pivotal Crankworx Whistler Air DH race. Cold, rainy temperatures through early summer in Whistler set these riders up with a fast A-Line.

“The run was really good, the track is in really good condition this year, they’ve done a lot of work on it, and it was running fast,” Mick Hannah said, still sweating and taking in the vibes from his winning run. “The bike setup was important, but also just executing everything really well was also important. Because it was running faster, there was a little bit less pedaling than usual, so I felt like I wasn’t really push hard enough but I just kind of felt like I was at the limit of the track. It was an interesting race run, and it went well.”

Mick Hannah has participated in every single Crankworx Whistler since the beginning of Crankworx time (2004 to be exact!), and so the homecoming feels were real for Mick and the crowd as he stood atop the podium.

“It’s amazing to be back here in Whistler. There’s such a fun atmosphere here and you get to have really fun laps with all our buddies and friends that we don’t necessarily see every week. There’s people that I have seen for over a year so it’s been really nice and awesome to be here. It’s Whistler, isn’t it!”

Vaea Verbeeck reigned supreme on the A-Line track today, beaming with her gold medal to start her week of racing at Crankworx Whistler.

“This is my first Air DH win at Crankworx Whistler, and A-Line is pretty epic,” Vaea said. “I’m definitely excited. Whistler is a big tsunami, so I was trying to ease into it but yesterday evening, I started to feel the pressure and the stress like there is just so much coming in. I’m really happy that today worked out the way that I wanted it to. I’m feeling fresh and excited to see how the week ahead turns out.”

The Canadian women were definitely on fire today on this epic track, with Kirsten Van Horne coming in hot on Vaea’s heels, followed by Whistler local Georgia Astle – a rider who has put plenty of miles under her wheels at Whistler Mountain Bike Park.

It wouldn’t be a Crankworx Whistler A-Line race without party train squads, filthy whips off the GLC jump, and riders pushing the limits on the infamous tombstone. Crowd pleasers of the day were Billy Meaclem’s flat spin, Haydyn Wynter with the no foot can, and Max Grayston lacing a backie.

This is just the beginning of the Crankworx Whistler party vibes. Next up is a is the Specialized Dual Slalom Whistler.

Spectators looking to come onsite can watch for free at Base 2 on Blackcomb Mountain. Access to Blackcomb’s Base 2 via FREE access to the Excalibur Gondola. Upload is accessible to foot passengers from Skiers Plaza. There is also free parking at Blackcomb Bas 2 in Lots 6 & 7. For those who can’t make it onsite, you can watch the live broadcast, currently scheduled for Tuesday, August 9th, 5:00 pm PDT available on crankworx.com and Red Bull TV.

Schedule and details for all events to come during Crankworx Whistler 2022: crankworx.com.