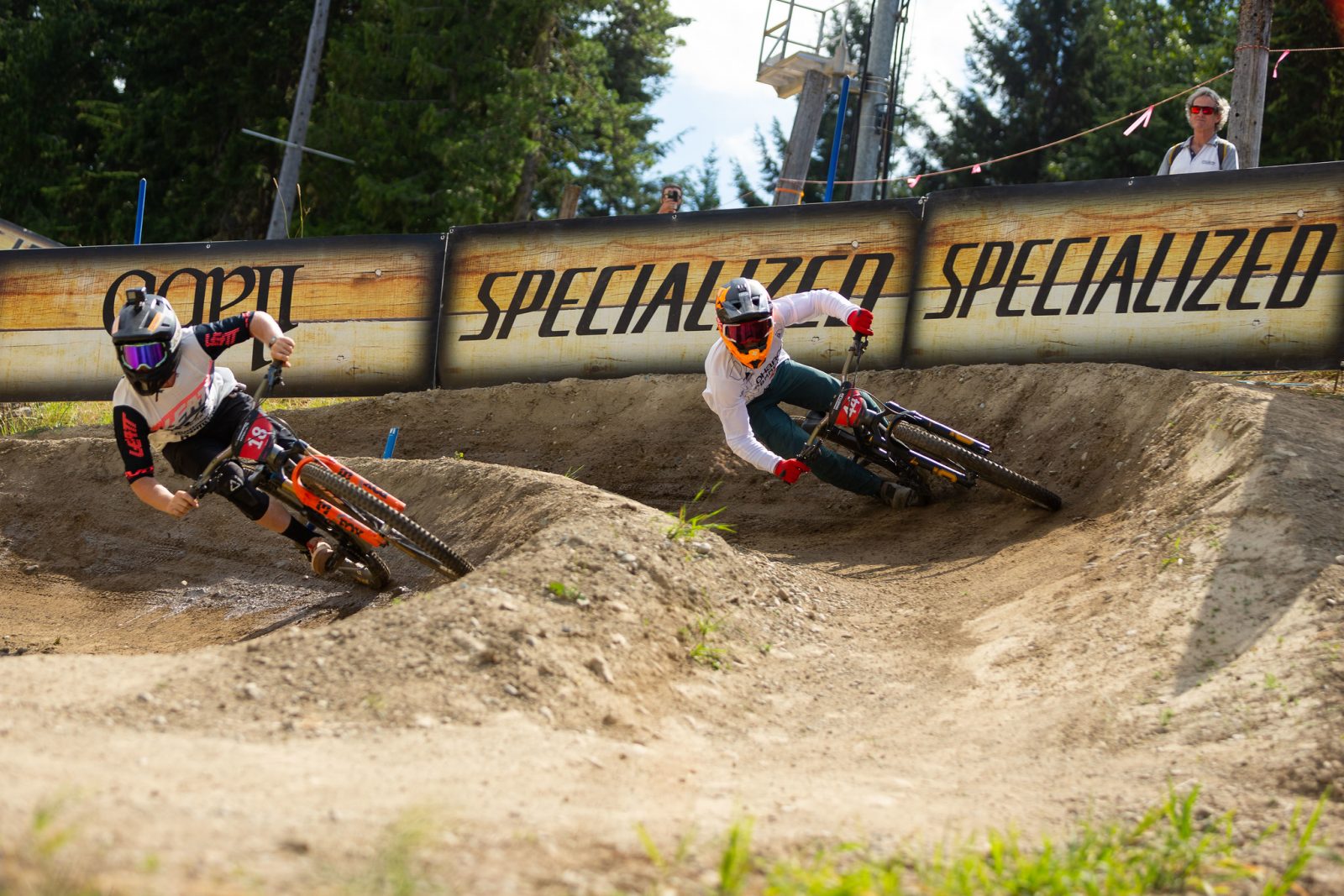 Both riders giving it their all and riding with reckless abandon for the gold medal.

WHISTLER, B.C., August 9, 2022 –It was neck and neck action today at the Specialized Dual Slalom track here at Crankworx Whistler; the riders and the crowd firing on all cylinders. The two who came out on top today, showing what it means to never give up when it comes to head-to-head bike racing, are Bernard Kerr and Vaea Verbeeck. That’s two golds, two days in a row for Vaea who is technically still in recovery mode from a knee injury earlier this year, and has cheekily coined her relationship with her knee as “the boss”. She may be the reigning Queen of Crankworx, but if Vaea’s knee is the boss, she is likely not winning employee of the month anytime soon.

“My knee is definitely my boss. I need to ignore my boss every once in a while for the finals because at the end of the day, I’m very checked out, and just trying to survive,” the Canadian rider said. “I feel I’m in a dream right now! I don’t know, I haven’t had this much knee pain since my actual injury happened months ago, and I feel bad mentioning my knee being an issue because I’m winning. Honestly, I’m having really tough days right now, so it feels like a dream when I come out on top at the end of a race.”

Bernard Kerr, has been keeping busy as a top finisher on the World Cup Downhill circuit, and the crowd was going wild to see the British rider return to  Crankworx Whistler and battle it out on the slalom course.

“I’m so stoked to be back here, I love this place and just hyped to be racing again and doing good,” said Bernard Kerr. “It’s been a minute since I won a Crankworx event, so I’m stoked and I couldn’t be happier. When you’re on, you’re on, and I guess I’m on right now so I want to keep it going.”

“The top was a bit slower and techy for me, and the bottom was super high speed,” Bernard commented on the track and how he absolutely murdered the last corners, getting the fastest run of the day against Joey Forresta in the gold medal match-up. “My bike was unreal but the black side was the best even though I liked the bottom of both tracks for sure.”

Joey had a slight advantage on the first run of the finals, but Bernard was flying through the corners, creating so much momentum through the turn and almost jumping out to get the apex perfectly, beating Joey by 38.75 seconds. Joey fought a hard battle today and will be taking home the silver medal for men’s Specialized Dual Slalom.

“There was a lot of good battles today. Honestly my favourite was probably against Mick. Looking up to him as a kid, and always watching him, it’s pretty special to be able to race him, and especially to beat him. He’s beat me a couple of times and it feels good to finally make it happen to win a race against Mick Hannah. It’s always cool to go against people you’ve looked up to when you’re a kid.”

Moving up the ranks and making a name for herself is American rider, Jordy Scott, who takes second place in the Women’s category of the Specialized Dual Slalom race today.

“It’s really awesome, my first ever downhill race or mountain bike race was at Crankworx Whistler in 2017, so to be here in the big show where I’ve watched people after all these years is really cool,” Jordy exclaimed. “This is my first time in the big show for dual slalom so I’m really happy to see the progress I’ve been making on this bike. The past few years, I didn’t make it out of the Round of 32, so first year I didn’t even qualify. Really nice progress there! A lot of motivation now going into the next few events so it’s great to be here.”

The bronze medal battle for the women’s category had ilabb team riders, Harriet Burbidge-Smith and Louise Ferguson up against each other. While they may be team mates, once you’re in the start gate, there’s no friends on the race track. Both ladies were pushing to the limit for the bronze medal position. While Haz had a significant advantage in the first round, riding with a renewed passion from losing against Jordy Scott in the semi-finals, it wasn’t enough against Louise’s ability to pounce on the corners with precision in the second run, clawing back the bronze medal position by two hundreds of a second.

Jackson Frew kept Bas Van Steenbergen honest in the men’s bronze medal match, but the reigning King of Crankworx was able to make up time by 0.32 seconds to get the bronze medal and more points on the board toward the overall Crankworx World Tour rankings.

Looking ahead for tomorrow, we’ve got the pro finals of the Ultimate Pump Track Challenge on deck and this year the athletes will see a remix of the discipline (!!). Instead of two racers, four race head-to-head-to-head-to-head. Each racer will be on an identical side-by-side lane that features rollers and gaps. The single-run format sees the two fastest riders advance from one round to the next. This is tight Pump Track action and good times, next-levelled. A debut not to be missed.

Spectators looking to come onsite can watch for free at Base 2 on Blackcomb Mountain. Access to Blackcomb’s Base 2 via FREE access to the Excalibur Gondola. Upload is accessible to foot passengers from Skiers Plaza. There is also free parking at Blackcomb Bas 2 in Lots 6 & 7. For those who can’t make it onsite, you can watch the live broadcast, currently scheduled for Wednesday, August 10th, 6:00 pm PDT available on crankworx.com and Red Bull TV.