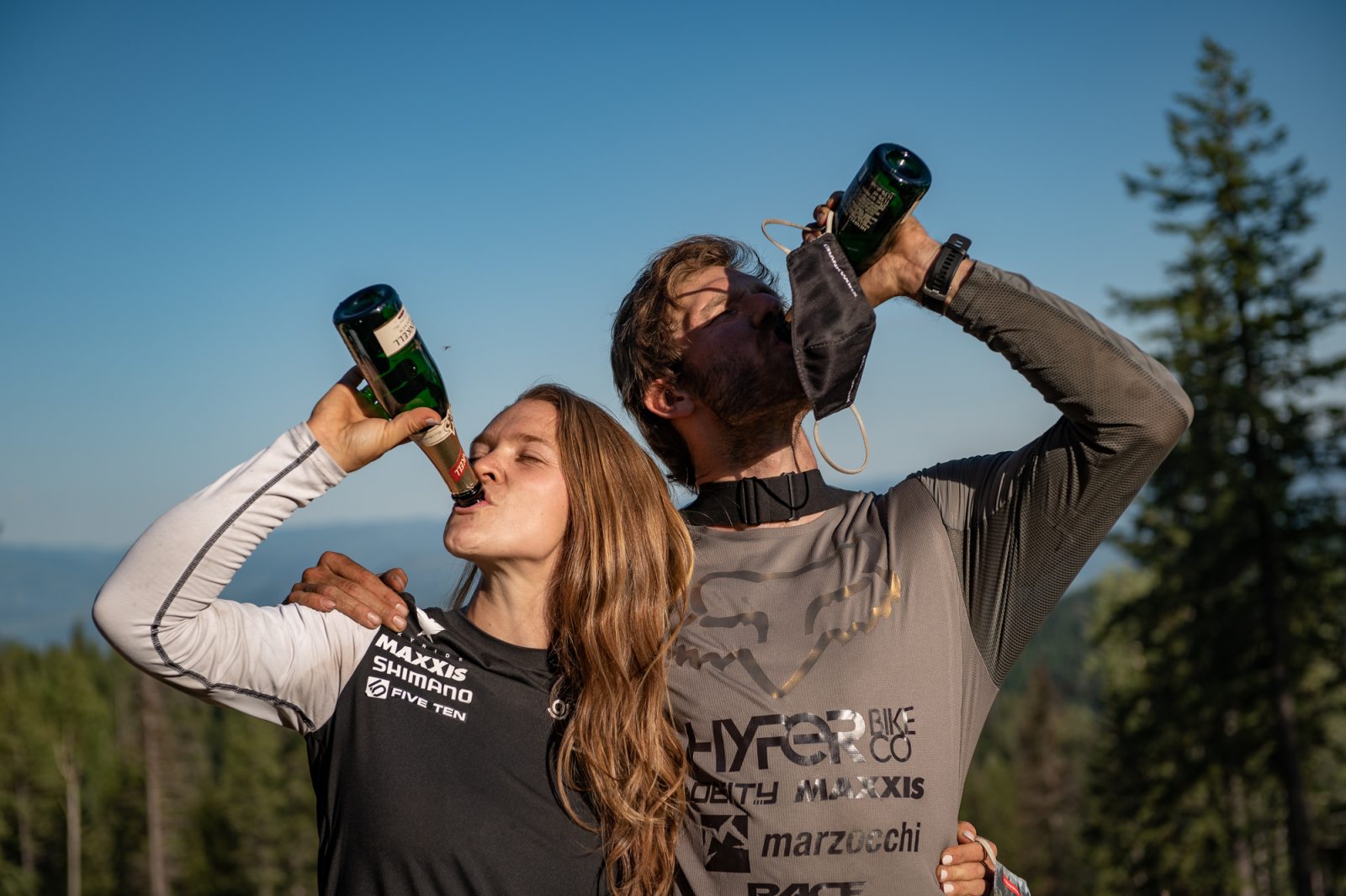 VERNON, BC, July 30, 2020 — For Vaea Verbeeck and Bas van Steenbergen of nearby Coldstream, B.C., it was a “dramatic, eventful day” (in the words of Verbeeck) of racing at Vernon’s SilverStar Resort.

The two emerged victorious, the first shared podium for the couple, after a day of hot and rowdy racing in the SilverStar Dual Slalom. The event was the second day of competition for the SilverStar stop of the three week long CLIF Crankworx Summer Series.

The win marked the third career Crankworx Dual Slalom win for Verbeeck, and her second podium of the week. She placed second in the previous day’s SilverStar Enduro.

Her opponent in the final matchup on the Dual Slalom course was the rider who bested her by under two seconds the previous day, Casey Brown.

“Casey got the first round and I knew that I had to make up some time,” said Verbeeck, who was 0.03 behind after their first finals matchup. “Near the bottom I was feeling like I had a little bit of a lead but not much. So we both didn’t know who had won it.”

When the final times came through, Verbeeck was ahead by a tight 0.37 seconds overall.

“That’s the way it should be. We’re both stoked for each other. Fun, positive note to end the day on for sure.”

Like Verbeeck, van Steenbergen lined up at the start gate next to the winner of the Enduro for the Elite Men’s final. In his case, World Cup downhiller Finn Iles. Like Brown, Iles crossed the line fastest in their first finals matchup, but van Steenbergen didn’t let it get in his head.

“I feel like the last while I’ve thrown it away by overriding it,” said van Steenbergen, who’s missed the top step in Crankworx Dual Slalom racing twice in the past two years. “I knew that I had the speed to win and I rode safe and smooth and didn’t override it, which I’m pretty stoked on.”

In the end, BVS was faster than Iles by just under half a second after two. A tight margin, but enough to earn him the win.

“I just kind of visualize the track before dropping in and try to tell myself where to come in easy and where to come in fast and just try to cool myself down,” he said of his pre-race strategy. “I feel like a lot of times you’re either trying too hard or not hard enough in Dual Slalom.”

Third place for the men went to the young gun, downhiller Lucas Cruz, who beat out Enduro all-star Remi Gauvin.

For both van Steenbergen and Verbeeck, the win was hard-fought. Verbeeck called the course “a bit of a monster,” and for good reason.

“Shortly after the beginning I thought I was out for the next two months,” she said, after a spill in practice left her thinking she had broken her arm. With some time off to assess, she decided to power through, a decision that paid off.

“It was manicured and built up but definitely not forgiving at all,” added Verbeeck. “You had to be very precise. So if you took a chance and tried to double through the rhythm you had to be super precise or bite the dust. Definitely a tough one, but overall still very exciting to have that sort of built track rather than keeping it too simple. It was exciting to watch and that’s how it should be.”

“Right off the start, that triple into the really tight turns was actually really hard and I had to wiggle my way around some of those corners a couple of times to make it around the posts,” added van Steenbergen of what he thought to be the toughest section of the course. “Those were pretty gnarly for sure.”

Next up, the Maxxis SilverStar DH will take this week’s rowdy racing to the next, next level.

Friday’s coverage will include: