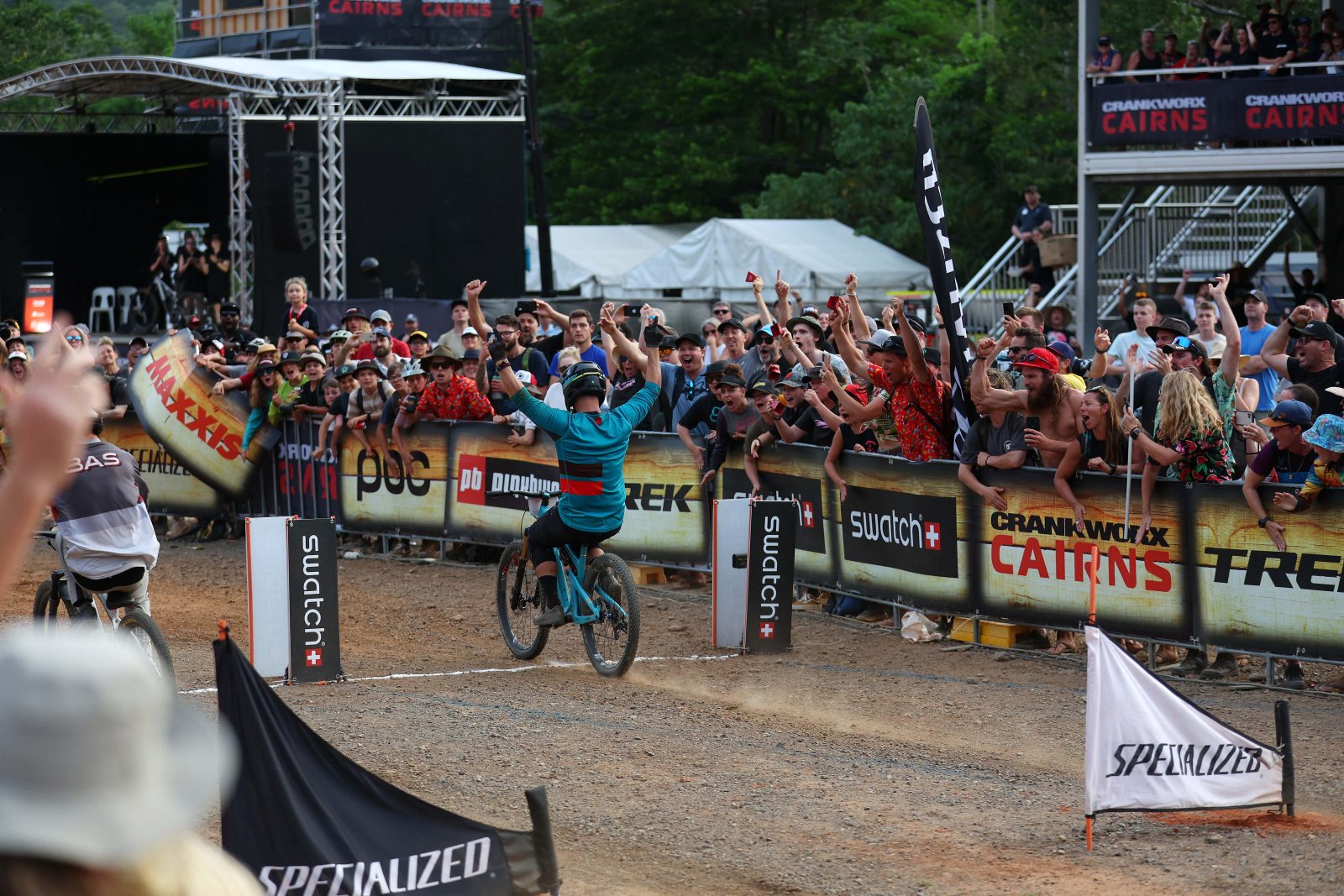 Inaugural festival wraps with fast racing, wild crowds, and the final podium shoeys of the week.

CAIRNS, AUSTRALIA, October 9, 2022 – Today was the fifth and final Crankworx competition in beautiful Cairns, Australia, and it was all about Specialized Dual Slalom. The momentum and excitement could be heard through the crowds of Australian fans cheering, ringing cowbells, dinging rims, and downing shoey’s of Red Bull all alongside the course. This Dual Slalom track was full speed. Riders were shifting gears the entire way from top to bottom, accelerating all the way through to then collect composure getting to a flat corner section to the finish line. It was clear how much the riders needed to stay on their toes throughout the whole course. Shark fins, wall rides (a Crankworx Dual Slalom event first!), fast berms, canon logs, flat corners – this track literally had it all.

Cairns’ own hometown hero, Mick Hannah put on masterclass of the track with multiple fastest times of the day and busting out stellar second run recoveries from differentials in the quarter and semi finals.

“I think one of the courses is a little bit slower,” Hannah said of how he was able to make up for lost time and gain his way to the gold-medal match-up. “Jackson Frew was super fast in his runs, and I was hoping to get to the finals with him. He was super creative in the wall ride section, and it was cool to have two different lines and have the four fastest times of the day so far. I had a hard time not doing a triple on the wall ride section to be honest. Every time I tried to come in short, I just cased it, so I just decided to send it. I had a bit of a mishap on it during practice, got a bit of a black eye, but it’s working out so far.”

The Australian moved on to the gold-medal match-up against Bas Van Steenbergen, the dark horse of the day who qualified in 5th place and then managed to find his stride in the quarter and semi finals. It was an extremely tight match-up in the end. When Bas struggled to get back on the pedals in the flat corners of the second run, Sick Mick knew he got the W, gliding through the finish line with both hands up in the air. A very rare sighting for a Dual Slalom finish line and the crowd of locals were absolutely here for it.

“Its amazing,” Hannah says of how much sweeter it is to be on the top step of the podium in his hometown in front of cheering family and friends. “Here in Cairns and the crowd, it’s just awesome here and I have so much support. Thanks for bringing the event here, it’s a dream come true. We get to race these things all over the world and so much support from home so to put the show on right in our backyard is sick.”

The Australian podium hype has been real this past week at Crankworx Cairns, and the Elite Female gold medal match-up kept the hot streak going with Caroline Buchanan up against Harriet “Haz” Burbidge-Smith. These two ladies were racing for the bragging rights, for all the marbles, for home country representation. The race runs were neck and neck, both with perfect gate starts, putting as much power as they can before getting into the high-speed sections. Buchanan, in fine form and carrying the momentum from her Pump Track gold-medal the day before, beat Haz by 0.777 seconds.

“These podiums are so hard, the girls are on an absolute new standard,” Buchanan said. “Me and Haz, we’ve raced head-to-head multiple times before. It really was that fairy tale experience for the Aussies to come head-to-head in the final, and these are the moments where you just step up, you find that extra gear within yourself and you try to shut out the nerves and give it 100. We’re not even braking till the last corner so it’s absolutely the most wild, pinned ride. Probably the favorite course I’ve ever done.”

Wild, pinned, loose, fast are definitely the descriptors of this tight battle today. The bronze medal matchups were no exception. Vaea Verbeeck is going home with the bronze medal today, taking that podium position from Jordy Scott by 0.498 seconds. For the Elite Male category, Jackson Frew will take not only the bronze medal but also multiple fastest times of the day today. He was on an absolute heater all day on course, doing it for his countrymen in the crowds.

This concludes the 2022 Crankworx Cairns festival, with unbelievable racing from Whip Off to Speed & Style to Downhill to Pump Track to Slopestyle to Dual Slalom. The closing remarks from the Dual Slalom broadcast was all about the infamous Crankworx Cairns shoey’s. The official count of shoey’s was confirmed on the broadcast today: never enough.

Jordy Scott and Bas Van Steenbergen currently lead the battle for 2023’s titles of the King and Queen of Crankworx, with the fourth and final stop in Rotorua, New Zealand in just less than a month (!!!). Riders will have one last chance to compete for the coveted King and Queen titles at Crankworx Rotorua, November 5-13th, 2022.