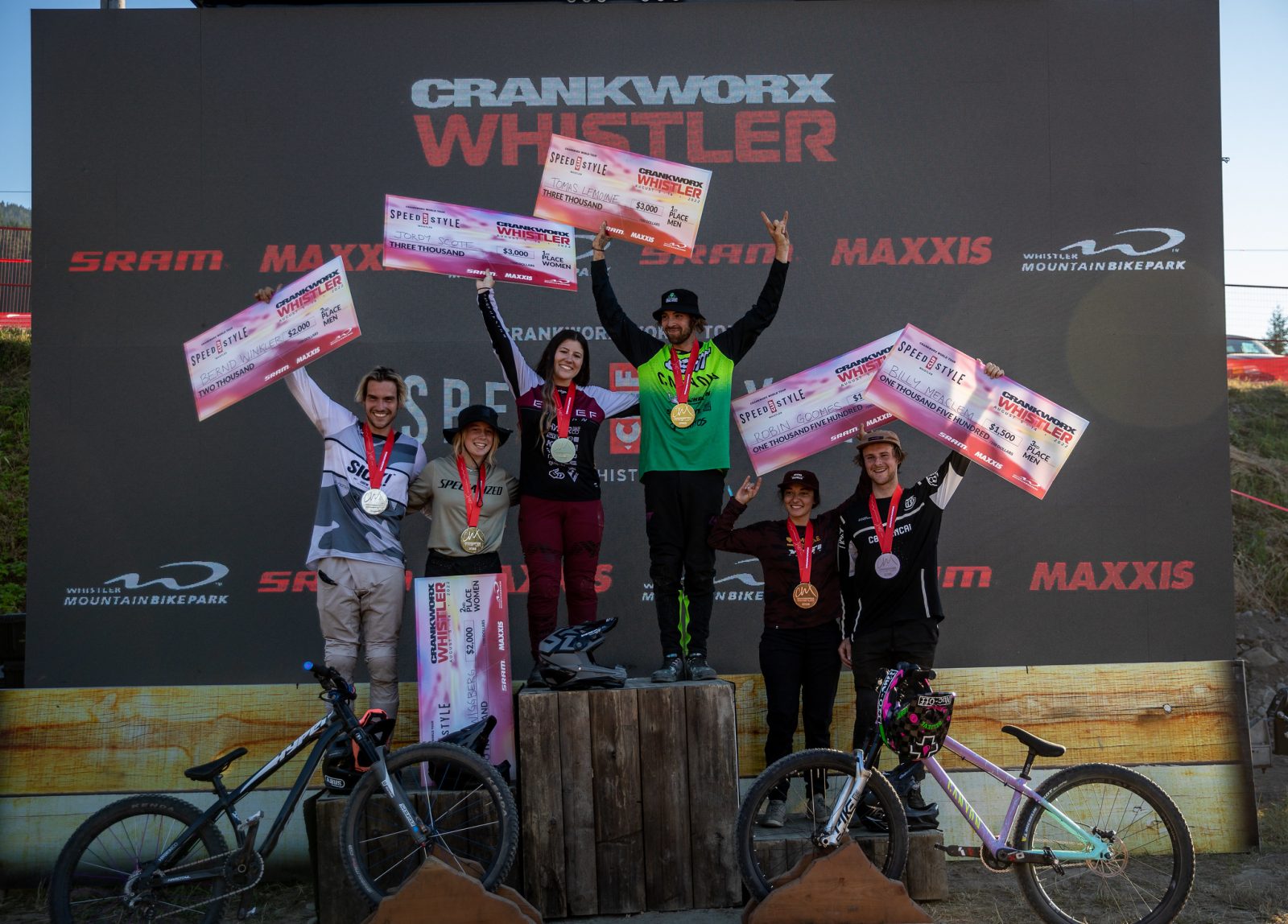 Lifestyles of the Fast & Stylish with Lemoine holding onto the top position of Speed & Style on the Crankworx World Tour and Jordy Scott taking the lead in the Queen of Crankworx rankings.

WHISTLER, B.C., August 11, 2022 – It was a melting pot of disciplines and strengths at the CLIF Speed & Style Whistler event today, and riders fought a tough battle to find the right recipe combo of stylish tricks and lighting speed. This crowd pleaser event sets the stage for the world’s best slope athletes, World Cup racers and Crankworx all-stars to see who can put their skills together and rise to the top.

Tomas Lemoine really shined on the stage today taking the W as the winningest speed & style rider of all time at Crankworx Whistler.

“I feel very good, I started the day very tired from the show and the big day of practice, plus pump track yesterday,” Tomas remarked on his last 24 hours leading up to this gold medal run. “I felt like I didn’t really have it in the morning, and I got better during the day I think, and just tried to hold on and not think about being tired. Let’s go! I want that medal, let’s grab one. Luckily I grabbed the gold.”

For anyone wondering about “the show” the French rider is referring to, it is the sold-out rap show that his alter ego ‘Lil Moine’ performed at midnight the night before. Meanwhile, the Women’s Gold Medal champ, Jordy Scott, was on a different program trying to get as much rest as possible to nail it on the speed points in today’s event.

“I’m super happy,” American rider, Jordy Scott said. “I have had a rough couple of weeks going into this, I got really sick after Innsbruck, and then had a huge downhill crash, so I wasn’t riding for two weeks going into this. Lots of rest, and so I came in feeling great after that big rest period but mentally it’s a bit hard when you haven’t been on the bike for two weeks and unsure how you feel getting back into it. It felt great though so it must have been good to take a week off and reset.”

Rest vs party, speed vs style. Everyone has their strengths on the Speed & Style course and it’s all about finding that perfect balance.

Lemoine leaned into his strengths as one of the most stylish riders on the planet laying down a flawless second run of the gold-medal matchup.

“After I saw Bernd crash on the first run, I just cruised with a 360 on the second jump,” the French rider breaks down the strategy behind this gold-medal match-up against silver-medalist Bernd Winkler. “On the second run, I knew I had a two-second advantage, so I just tried to ride clean. I did a double truck on top, 360 combo on the second jump – my favorite trick and made it to the end.”

The Austrian rider, Winkler, is also no stranger to the slopestyle scene talked about how he chose the best tricks to get him to the podium.

“I always choose 360 bar spin, 360 double bar spin or triple bar spin on the easier jump, and then a flip bar spin on the harder jump because you can go fast and overshoot a little bit, but still make adjustments to get the run done with these tricks,” Winkler relayed. “All in all it was a super good course and I liked it a lot.”

Swedish rider, Alma Wiggberg, laid down some mind-blowing tricks, including consistently executing 360s off the jumps over the course of the day. This 16-year old newcomer to the Crankworx scene will take home the claim to fame of a first 360 in a Women’s Crankworx Speed & Style competition getting her the second place position on the podium.

“I had the 360 pretty good on the practice so I was stoked to just get it on every single run,” the Swedish rider said whilst grinning ear to ear. “Then for the backflip, I didn’t really have anything to lose so I just went for it, and it worked. For the second run of the gold-medal round, I saw that I was a bit behind Jordy, so I decided to just do the backflip on the second jump. I wanted to do it earlier, but I was a bit scared in the practice, so I didn’t try it, but I didn’t have anything to lose!”

Kiwi rider, Robin Goomes also threw down her signature backflip tricks exceptionally, taking home the bronze medal for the CLIF Speed & Style Whistler, alongside her fellow countryman Billy Meaclem who will take the bronze in the men’s category.

Tomorrow will be a Crankworx classic, the Official Whip-Off World Championships Presented by POC located at Whistler Mountain Bike Park’s infamous jump line Crabapple Hits. With a stacked list of steezy riders, it will surely be a showstopper of big style and great vibes as these riders battle it out for the coveted championship belt, and the title of sovereign of style. Spectators with a bike and a Whistler Bike Park lift ticket can catch some of the action by riding down adjacent trails to view the event. Spectators without a bike can walk from Skiers Plaza up Mountain Road to Crabapple Hits.

For those who can’t make it onsite, be sure to follow Crankworx World Tour Instagram and Red Bull Bike Instagram for FOMO-worthy highlights before, during and after the event.

The next scheduled event on broadcast will be this Saturday, August 13th for the Pinnacle of Slopestyle, Red Bull Joyride. The time has finally come, and be sure to tune in if you can’t get to the boneyard in person. Red Bull Joyride will be broadcast live on crankworx.com and Red Bull TV.