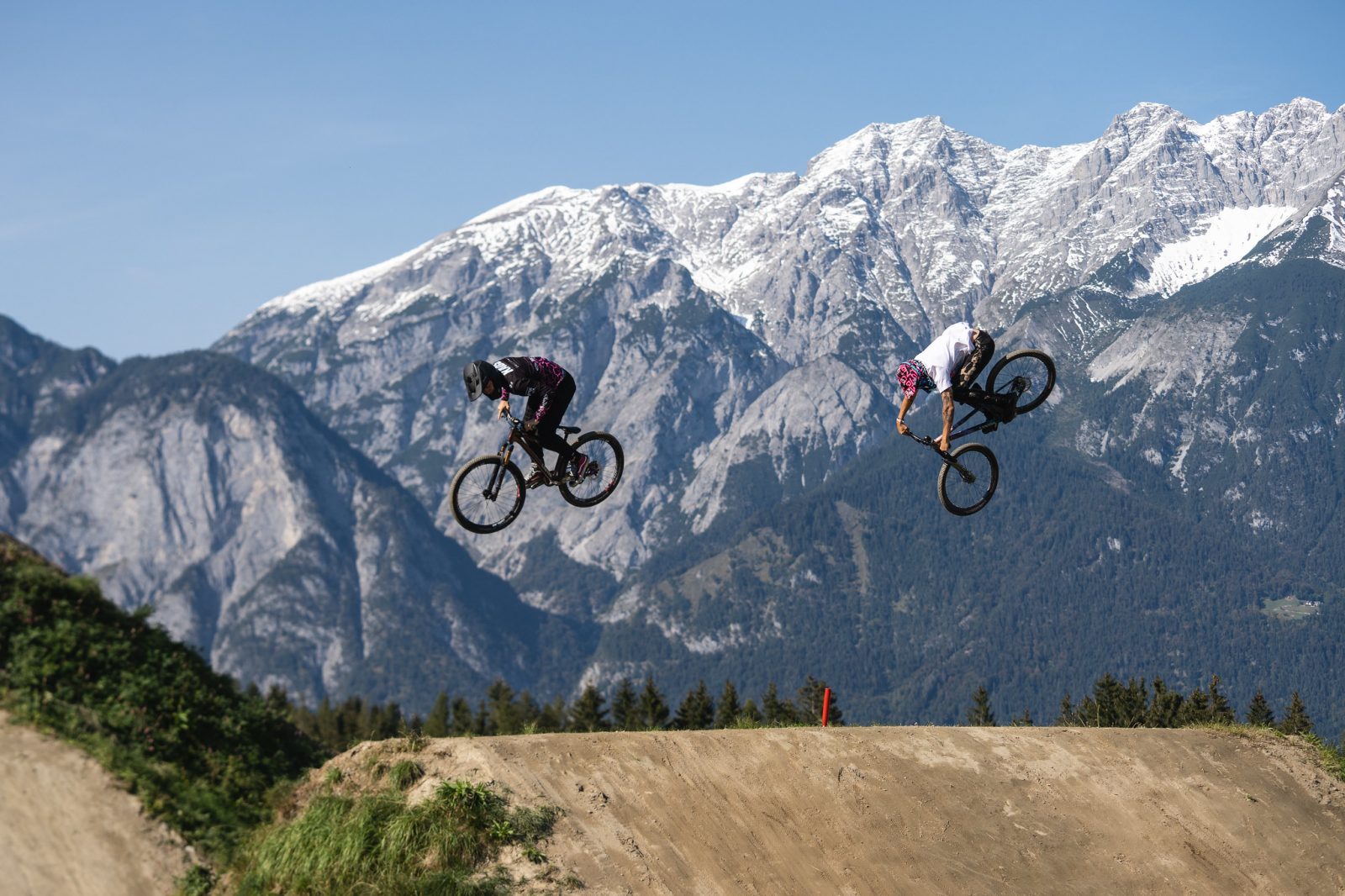 INNSBRUCK, AUSTRIA, October 2, 2020 — With a win in today’s CLIF Speed & Style presented by GoPro, Tomas Lemoine snags his third medal in 24 hours, saving the best for last. Last night at 7:30 p.m. he fought his way onto the podium for a third place finish in the RockShox Innsbruck Pump Track Challenge. Just over 12 hours later, he dropped into the  Crankworx Innsbruck Slopestyle, earning one better, finishing his day in second. Champagne sprayed, he moved straight on to Speed & Style, where he claimed the top spot.

“It feels pretty awesome,” said the 24-year-old French rider. “I’m pretty tired and pretty stoked…It was a pretty hard week, but super, super happy with the riding.  A bit sad that it’s already the end of the season, but really looking forward to 2021.”

After a six month hiatus from competition after Crankworx Rotorua wrapped in March, Lemoine said his success in Innsbruck took him by surprise.

“I didn’t really expect it because I was just riding at home, pretty much all the time since the COVID lockdown, with my friends who are all BMX riders, so a lot of skate park riding. I was just trying to take the year pretty chill and have fun, get back my creativity on my bike, and this was probably helpful. I felt pretty good in every different discipline I was riding.”

And while a W’s a W, it was not the most conventional win. Finals kicked off in the usual fashion, but a weather system rolled in earlier than forecast and the condition of the track deteriorated quickly. A weather hold was put in place, but eventually the course builders made the call that there wouldn’t be sufficient time to dry out the course. The final standings were therefore determined by the results from qualifications.

“I didn’t even really train today before the qualies because I was on the Slopestyle,” added Lemoine, who is one of the only Slopestyle riders who regularly competes in other disciplines. “I did like two or three laps, but didn’t really trick. And then they said ‘Ok, it’s qualies.’ And I was like ‘I need to do some tricks now.’ So I managed to do some stuff. I’m happy that I could still get the first place in qualies, ‘cause it’s the final result, which is kind of cool. I’m pretty happy.”

His winning formula for the day (on a track he won on two years ago in Innsbruck) included a double truck to X-up on the first jump, followed by a sprint through the course, ending on a flip, barspin to X-up.

And while his style pushed him out on top, his time of 23.826 was bested by one rider.

Sam Reynolds was the only other rider to cross the finish line sub 24 seconds. His 23.813 was the fastest time of the day, but not fast enough to ward off the stylish Lemoine and his high-scoring tricks. His qualifying result placed him +0.407 behind Lemoine.

“I’ve got second, third, fourth, and now second again. I’m just missing the #1!” said Reynolds of his past Speed & Style results, the best of which was a second place in Innsbruck in 2018, also behind Lemoine. “But Tomas is pretty unbeatable here. He’s super fast. If there’s anyone I’m happy to lose to, it’s definitely him.”

Today’s weather woes also put a damper on the women. Today had been slated to be the debut of the women’s category in Speed & Style in Innsbruck. Unfortunately because of the conditions, women’s qualifying was not able to go ahead.

Next up, DH racing’s triumphant return hits the airwaves Sunday with the iXS Innsbruck Downhill presented by Raiffeisen Club..