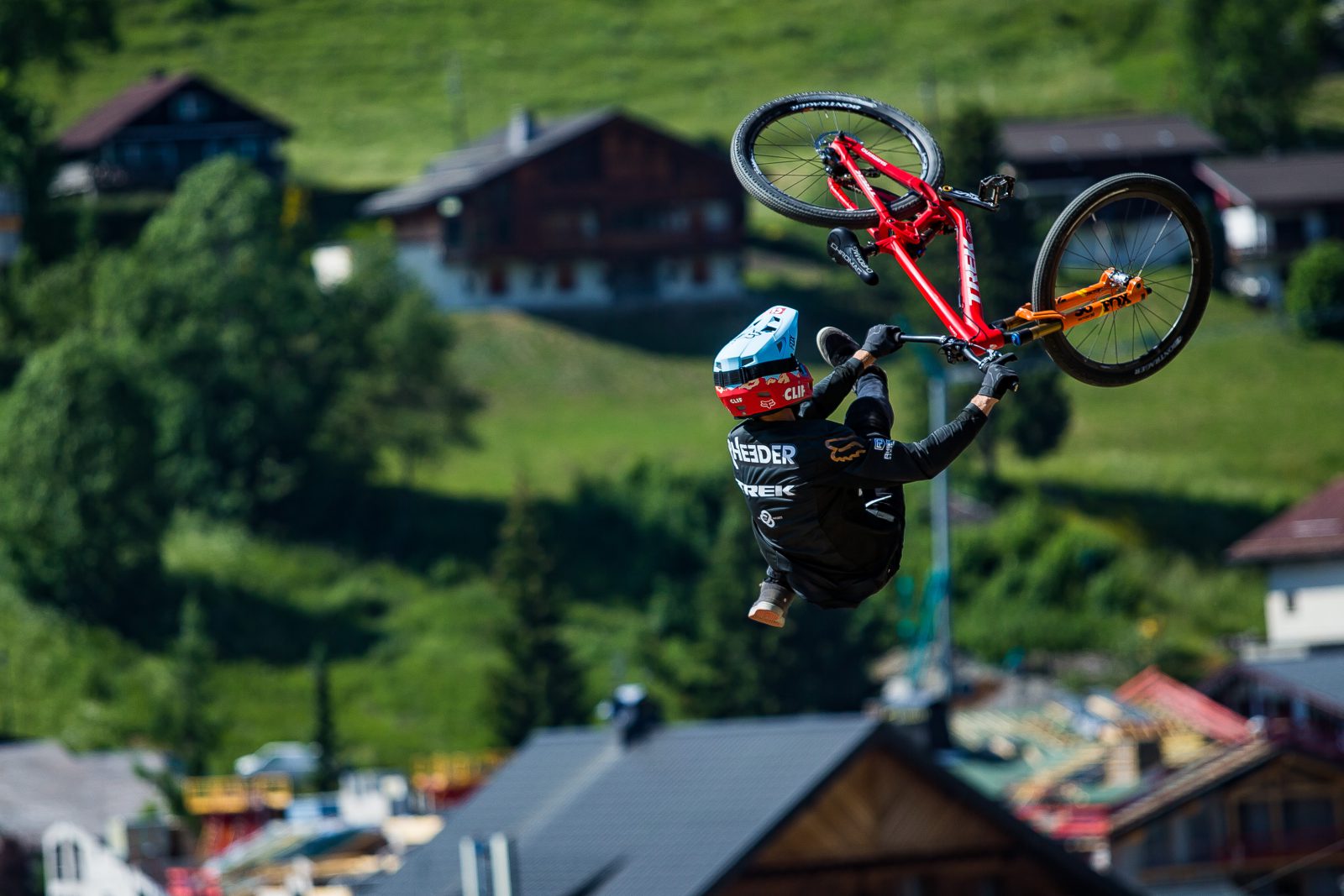 FOR IMMEDIATE RELEASE
Les Gets, FRANCE; Sunday, June 18
— Canadian superstar Brett Rheeder returned to the top Sunday evening in the Crankworx Les Gets Slopestyle, delivering a measured, near flawless performance in his first Crankworx competition since tearing his meniscus, and besting the latest breakout star in the sport, 17-year-old Swedish rookie Emil Johansson.

In interview from the finish coral, Rheeder said he missed only one barspin, then rattled off the ins and outs of his trick-laden run, which included a flip, one-foot can off the flat-drop at the top flowing into a double-whip on the second jump, a switch truck-driver landing into a switch cork-720, and a flip barspin to switch-whip into a regular flip-whip on off the log… He finished with a second cork-720.

“I’ve been running a freecoaster on my bike and I would like to eventually get a half-cab in on a drop,” he said. His main rival, Canadian Slopestyle idol and four-time Red Bull Joyride winner, Brandon Semenuk, used the maneuver off the first drop in Whistler last year.

Driven might be an understatement for the tough competitors who rise to the top in this sport. The upper echelon are known for their calculated consistency and utter driver. Nonetheless, Rheeder said he wasn’t about to let zeal destroy his body, or his career, when he pinched the meniscus in his knee joint last October, taking him off the bike, and his feet, for surgery and three months of recovery right before the first Crankworx event of the year. He opted not to compete.

“I had just gotten on my bike right before Rotorua and I thought, a) I’ve missed out on three months of training and getting ready for Rotorua, and (b) I’m like a toothpick right now. I don’t have any muscle on me. My legs are weak… As soon, as I got on my bike, I thought maybe I could try to force it, but my friends and family, my sponsors, all just said take your time and heal it up.”

Heal he did, but as he recovered, a new star hit the podium.

Still a high school student, Johansson appear was stunned as he mounted the third-place step in New Zealand, in no small part because his trajectory from Gold-level FMB (Freeride Mountain Bike Association) competitor to the top events in the sport took less than a year.

Now three months from that first Crankworx podium, he’s still climbing the ranks, even with a full year to go on his high school career, and this second-place finish places him squarely in the thick of the action as the frontrunner in the Crankworx Slopestyle World Tour Championship.

“Fifty-five weeks ago, I did my first gold event. I wasn’t even in the Diamond Series. Then two weeks after that, I was in my first diamond event, because I got a wildcard, and then it all went from there… Joyride, Colorado, I got into New Zealand. Everything has been happening so quick, it’s really hard to realize everything,” he said.

Third-place finisher Szymon Godziek, by contrast, has worked his way up through ranks, competing multiple times at Red Bull Joyride, in New Zealand, even twice in Les 2 Alpes, without making a Crankworx podium.

“I’ve changed my mental game,” he said Sunday. “I come to Crankworx, and from the very first day, I try to focus on my runs. I ride the practices good. I try to accomplish all the things which I want to in the practice…This is a mental game I would say. You have to be focused, practiced and not tired. It’s hard sometimes, but that’s what we have to go through.”

It is a long season yet, and the Triple Crown of Slopestyle now within grasp of two riders: Nicholi Rogatkin, for his winning run in Rotorua, and now Rheeder. The Triple Crown is the biggest prize in mountain biking, offering the winner $50,000 if he can secure three out of the four Crankworx Slopestyle gold medals in a single year.

The Slopestyle event wrapped up the first half of the Crankworx 2017 doubleheader in Les Gets, France and Innsbruck, Austria, and marked end of the second opportunity to score points toward the overall titles: King and Queen of Crankworx.