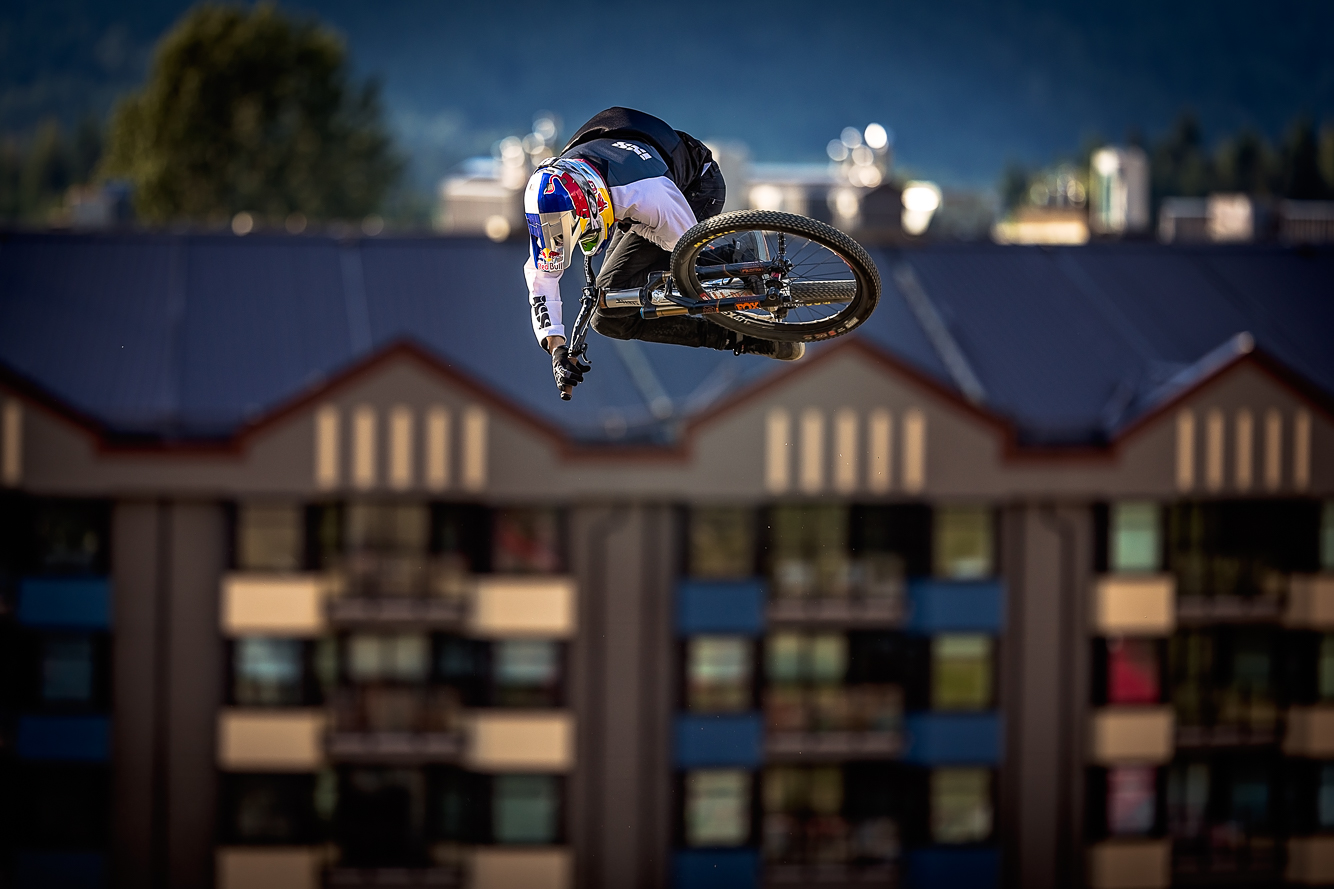 FOR IMMEDIATE RELEASE
Saturday, August 13, Whistler, BC
—Style, speed and a double “first ever” marked the opening competition of Crankworx Whistler, as the final stop of the 2016 Crankworx World Tour got underway on Saturday.

Slopestyle rider Tomas GENON (BEL) pulled out a win in the CLIF Bar Dual Speed & Style, proving tricks could dominate on the short, fast courses, despite athletes’ concerns the track itself would force speed to dominate.

“At the beginning of the day it was looking like we couldn’t do anything with tricks because the seeding run shows that the top six were only racers. So I was just like, well, I’m going to do my best and see how it goes,” said Genon.

Dual Speed and Style is the youngest sport at Crankworx and pits two riders against each other on a feature-laden, double course—one track for each rider. The riders have to beat the clock, and each other, but can be penalized or rewarded for the tricks they execute coming down the course.

Absolutely squeaking in the win with a final burst of speed, Genon out-tricked and out-raced Jakub VENCL (CZE), clearly proving to have a little of both qualities in the tank.

Competition for third spot had a mind-blowing story, meanwhile, as Tom VAN STEENBERGEN (CAN) earned the first perfect 100 in the sport’s history for executing its first double backflip—and he did it against his brother.

“I was just stoked to pull that double flip in a race,” he said. “We’ve raced against each other before in BMX way back, but this was really cool. Speed and Style is about bringing Slopestyle and racing together, so it’s super cool, and it was just great to race against my brother. It feels like the funnest thing ever.”

As Whistler marks the conclusion of the three-stop Crankworx World Tour, the competition also wrapped with Adrien LORON (FRA) being awarded the Speed & Style World Championship – his second series win. The points he’s accumulated so far also have him in the lead to secure the 2016 King of Crankworx.

“I came in to this mountain biking world by winning the Crankworx pump track three years ago, then they invited me to Canada and I won again. And now it’s my main event,” he said.

The CLIF Bar Dual Speed & Style marked the first live broadcast of seven, but is the fourth event of the 10-day festival.

On day one of competition, the first Kidsworx Enduro Crankworx has ever staged had a crowd gathered at Blackcomb Mountain bright and early, with where young racers eager to drop into the trail.

Showing true sportsmanship, Sam Marshall, 12, crossed the line with his brother Olly, 9, for one of the prouder moments of the festival thus far.

“On the last bit, I was trying to catch up with my little brother and I did, and we did the last section of the course together. He pulled over to let me pass, but I said no, let’s keep going,” said Sam, who was among the first of the young fans to congratulate Genon on his win the following day.

Crankworx is known as a place to ride alongside the best athletes in the sport and the Kidsworx events will be handed out by professional athletes, Rachel ATHERTON stopping by to hand out the Kidsworx Enduro.

Crankworx continues through Sunday, August 21 and hosts its own Crankworx Fantasy Competition on fantasy.crankworx.com . Players must select a team of athletes, staying below the salary cap, for a chance to win.

Photos for media can be accessed on the Crankworx Flickr account. They are filed by day; please credit Crankworx and the photographer lists.

Results for the inaugural SRAM Canadian Open Enduro Challenger presented by CamelBak will be posted on Crankworx.com.

Photo caption: Thomas Genon tricks his way to a win in the CLIF Bar Dual Speed & Style Saturday evening in the first live broadcast of the 10-day Crankworx Whistler, the conclusion of the Crankworx World Tour.