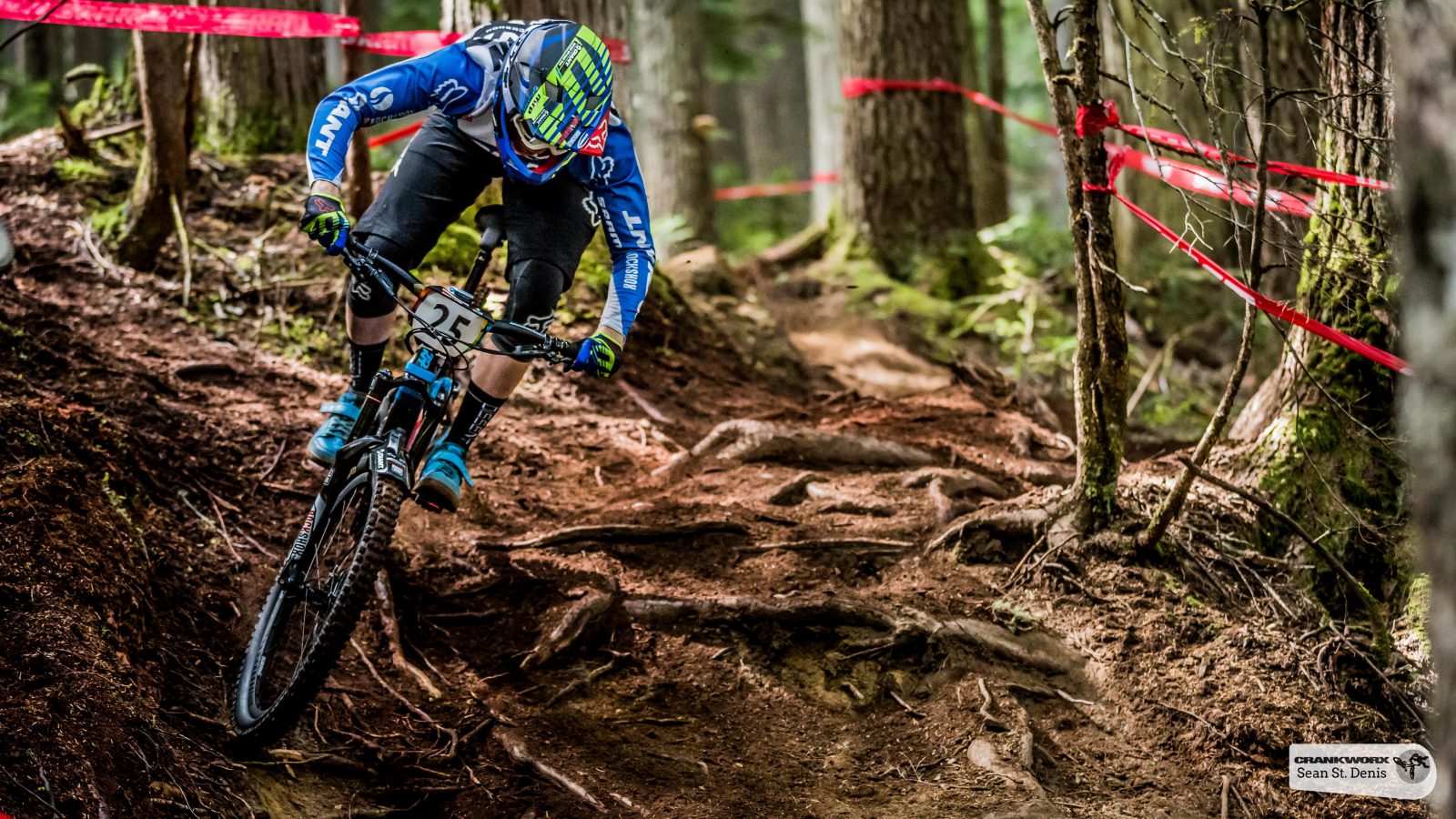 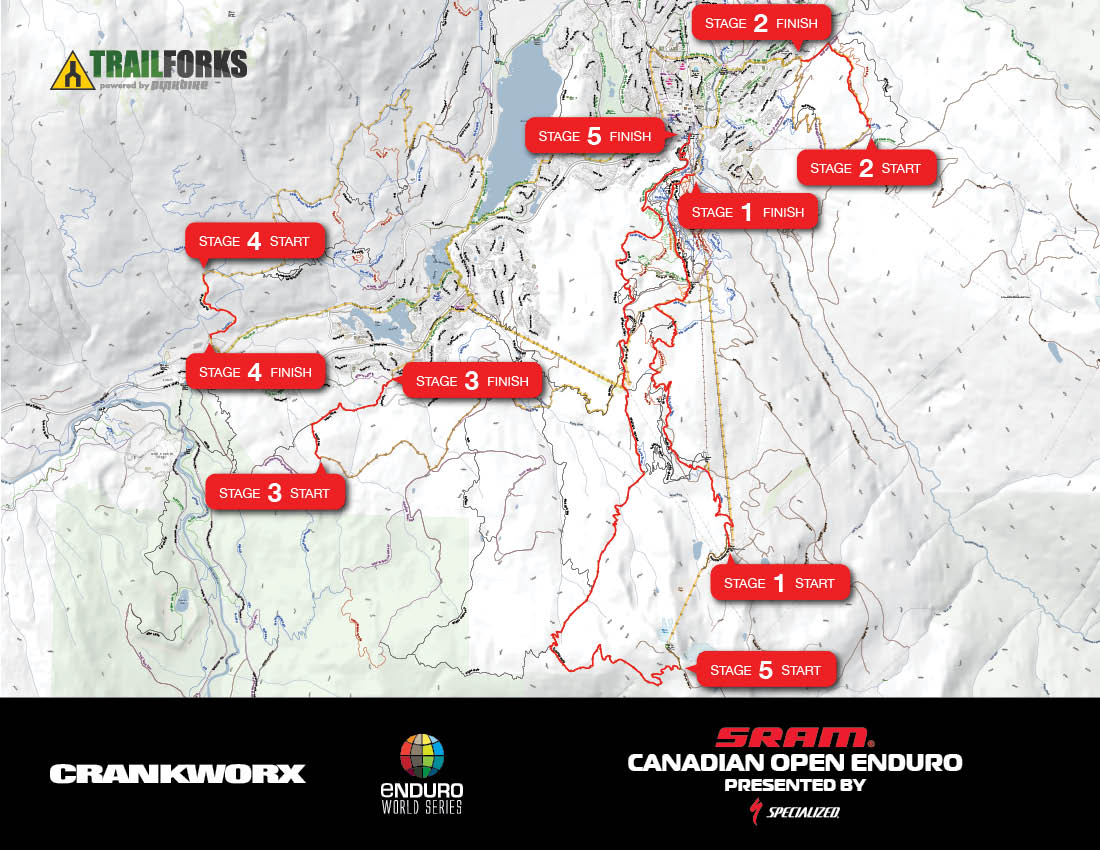 T1 – Head up the Whistler Village Gondola to the Roundhouse. You have arrived at the top of stage 1. Leave a minimum of 25 minutes before your start time.

Stage 1 – Uno Moss to Blue Velvet to Black Velvet to Facrobat to Expressway to Too Tight to Angry Pirate to Samurai Pizza Cat to Afternoon Delight to Detroit Rock City ends at the clearing before Heart of Darkness. When we said variety would be a big part of this year’s course, not sure how many people would have predicted this one. The upper half of Stage 1 is Bike Park Berm Fest, as riders descend almost 3000 vertical feet through some of Whistler’s most beautiful old growth forest. The lower half of the track ticks all the boxes of Bike Park Tech – as classic trails like Too Tight, Angry Pirate and Afternoon Delight throw every twist and turn imaginable at our tired riders. 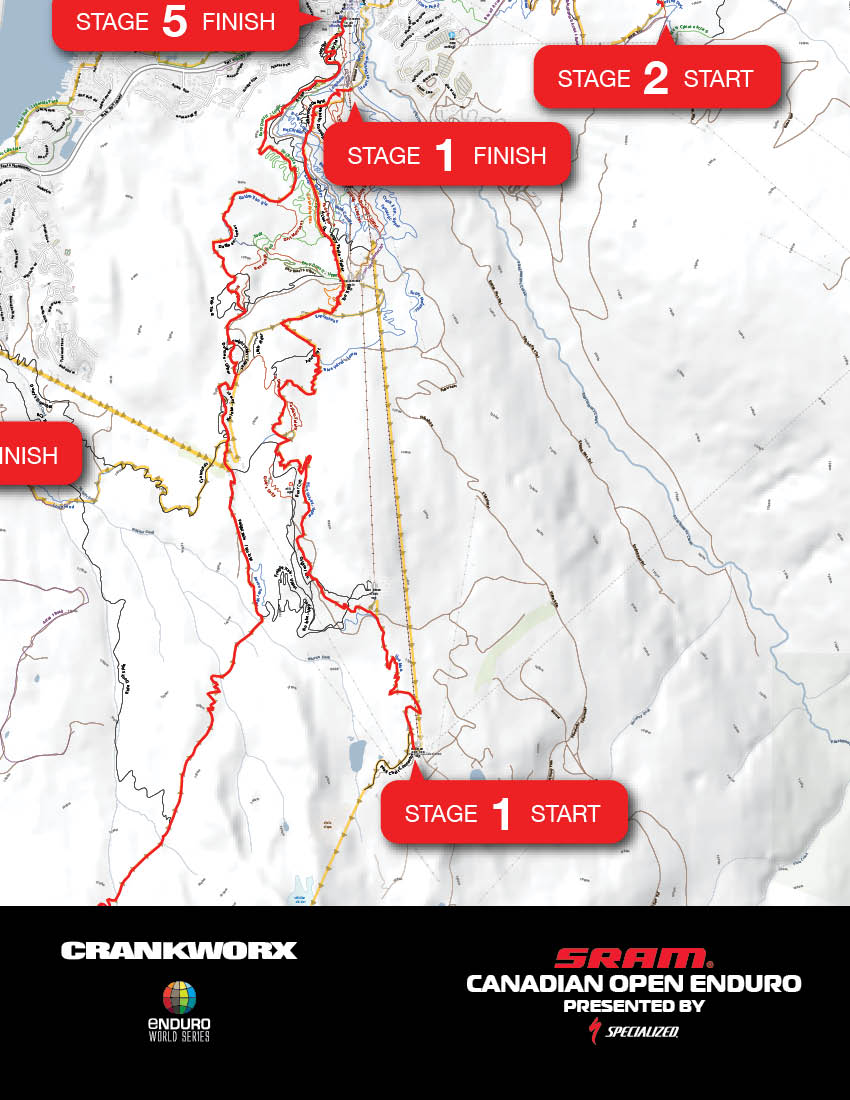 T2 – Up behind Snowberry Condos onto the Blackcomb Ski Out trails…. Heading up Blackcomb to…

Stage 2 – Crazy Train.  Whistler Classic brought back to life a few years back for the infamous #Crankzilla EWS Race in Whistler. Since 2014, the track has undergone some rerouting to the upper section. The trail is running great, and has a few spots of pedaling mixed into what makes Whistler famous… loamy, rooty single track. 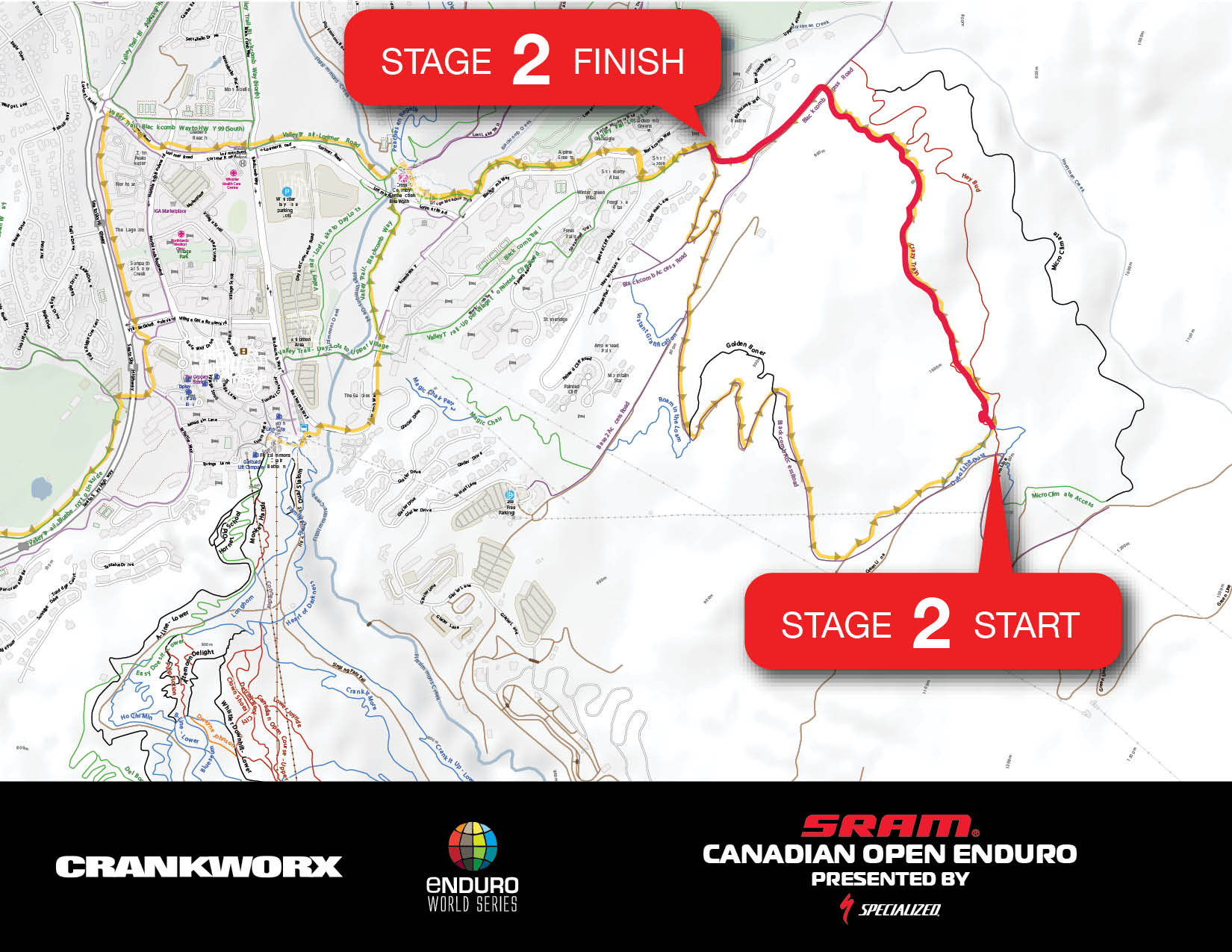 T3 – Takes you down the Valley Trail to Creekside. Up the Creekside Gondola, down Upper Dusty’s DH, along Love Canal to Kushy Love and onto the Lower Microwave Tower Access Road.

Stage 3 – Heavy Flow to Tunnel Vision.  Heavy Flow is a lesser known trail on the lower West Side of Whistler Mountain. Heavy Flow lives up to its name in the sense that there is serious flow to be had if you can stay focused and on top of the bike as it drops through a series of steep and challenging sections..  Become a passenger and you could end up in the woods.  Heavy Flow deposits you into the middle of Tunnel Vision… easily the trail that is going to require the most pedal strokes in the 2016 SRAM Canadian Open Enduro. It finishes with some bermed up flow after a rebuild in 2015. Stage 3 will also be stage 2 of the SRAM Canadian Open Enduro Challenger presented by Camelbak. 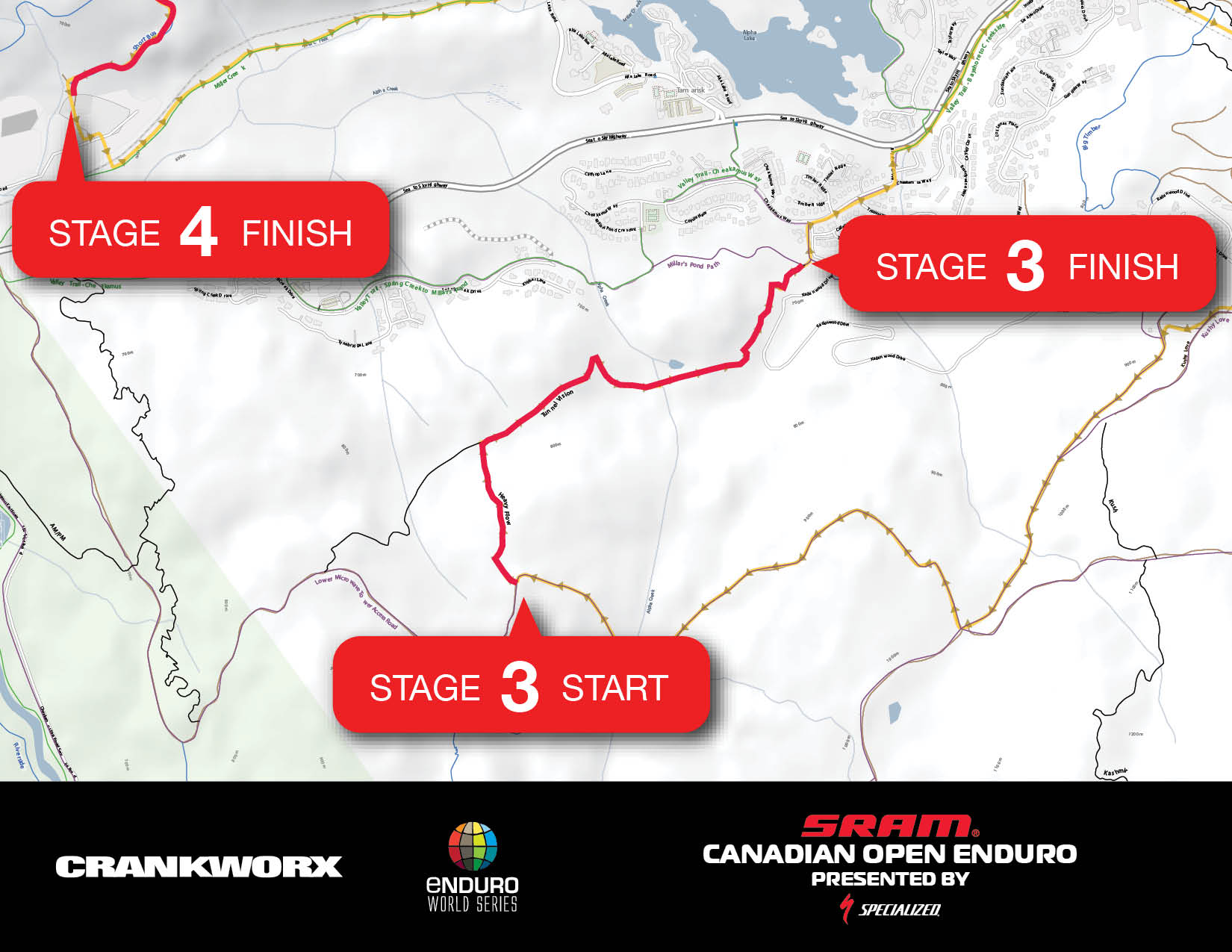 T4A – Brings you back to Creekside for a short lunch break.

T4B – From Creekside you’ll follow the Valley Trail towards Alta Lake coming out at Alta Lake Road, up Scotia Creek climb and onto Stonebridge Place road.  Up Darwin’s to the Rainbow-Sproat Flank Trail heading south towards the start of…

Stage 4- Pigs on the Wing to Short Bus. These two trails don’t see nearly the traffic the rest of the Whistler Valley but expect that to change after this year.  Both trails are mint at the moment and have all sorts of technical tricks to catch you up. Chutes, slick rock, loose and loam… it has it all. Short bus gets fast and rooty and finishes with low angle, loose, tight and narrow trail. The slogan here will be “Slow is new fast”. 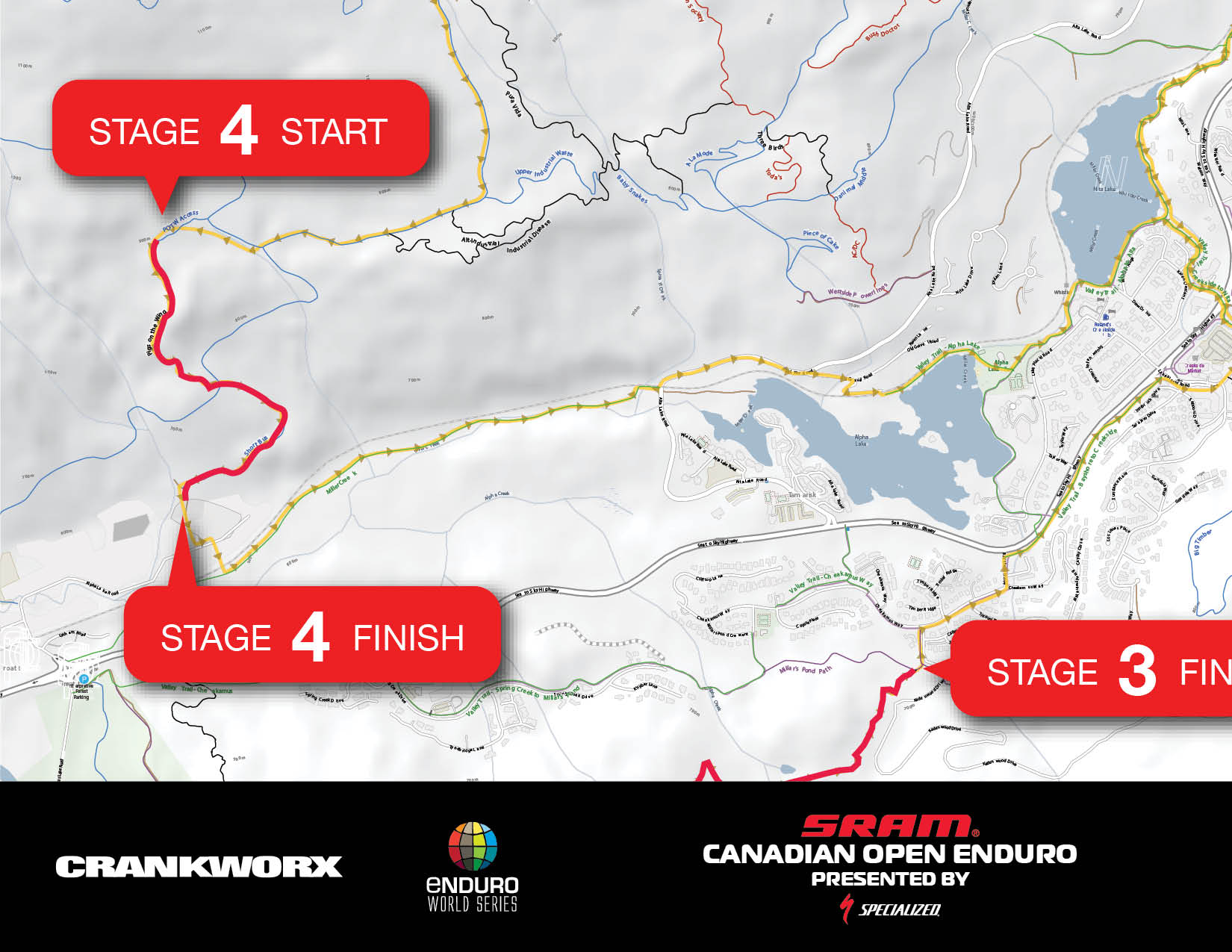 T5 – After finishing stage 5, take the Miller Creek Trail back to Alpha Lake. Around the west side of Alpha Lake back to Creekside. Up the Creekside Gondola, down to the mid-station of the Whistler Village Gondola and then to the Whistler Peak Chair.

Stage 5 – The Classic with a new Twist. The ultimate enduro stage, Top of the World. This time around however, the lower half sees the stage head for Drop-In Clinic, Duffman, Mackenzie River, back on to Duffman to Golden Triangle, hammer on the pedals before hitting Del Bocca Vista, Lower EZ Does it (more pedal time), into loose, dusty, techy Hornet before boosting off the GLC Drops into the waiting crowd at the base of Whistler Mountain. Past SRAM Canadian Open Enduro’s have been won and lost here and we expect this year to drama filled once again. Tune in for the Live Broadcast of stage 5 at Crankworx.com on Sunday