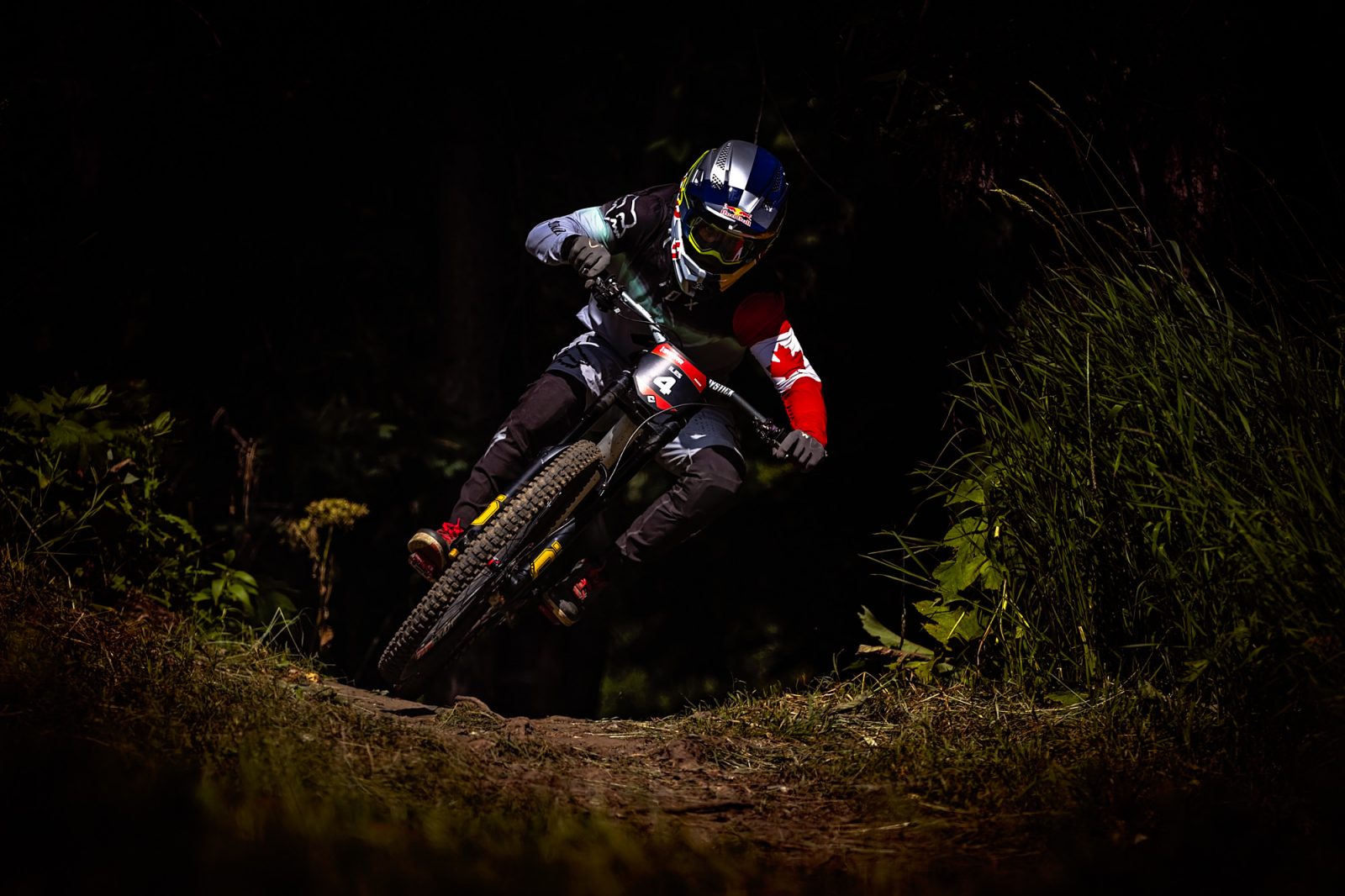 SUN PEAKS, B.C., August 13, 2020 — 18 days in to back-to-back-to-back racing and training, B.C.’s best mountain bikers still managed to turn it on when it counted, on a gruelling, long and physical track in the Maxxis Sun Peaks DH.

“I love this track,” said Finn Iles, who clocked the fastest time of the day with a 4:28.33. “ The top two and a half minutes of this one was so fun. It’s fast and straight and everything you want in a Downhill track. It was really physical. Four and a half minutes long. That’s basically the longest Downhill track you’ll find anywhere in terms of World Cup length or Crankworx length.”

“I felt like I needed a bit of redemption after last week,” he added, of his uncharacteristic 10th place finish in the Maxxis Kicking Horse DH. “I was kind of frustrated with myself. I felt like I hadn’t been riding my Downhill bike as well as I would have liked to over the past three weeks. So today I sort of figured something out on my bike and decided I should probably go for it and I feel like I rode really well. I’m super excited to take the win.”

The women’s first place finisher who, like Iles, is the reigning Canadian National Downhill Champ, echoed his elation.

“It feels awesome,” said Vaea Verbeeck, who’s 5:12.46 earned her the top spot. “Yesterday I was so exhausted I was just thinking about getting food in me and going to bed. But today it feels like an even bigger relief and I’m actually enjoying it. As much as I felt super exhausted – my arms were just about to fall off – I kind of noticed in practice this morning that when I was riding, I was charging. So I could still gather a little bit of energy to focus on the riding part, which made me pretty excited about dropping in for the race.”

Verbeeck said she did make a major mistake on track, drifting off trail and into the bushes, almost running into a tree, but managed to get back control.

“I had a great race run but still thought I gave it away. So I’m stoked I got a super clean race other than that one mistake.”

And while Iles secured enough points to clinch the overall CLIF Crankworx Summer Series Championship yesterday, Verbeeck is not guaranteed, but is certainly on the cusp. She would have to be a DNS in tomorrow’s  race, and earn no points, to not take the overall.

That said, she says she’s still ready to charge in the Sun Peaks Air DH, the final event to wrap up three weeks of competition.

One step down from Iles, Norco Factory Racing’s Henry Fitzgerald had much to celebrate. He ushered in his 22nd year with a second place finish.

“I felt really good,” said Fitzgerald, who was just over two seconds behind Iles with a 4:30.68. “Where I had to pedal I pedalled really hard. There were a few tricky corners where I don’t know if anyone felt good. I didn’t feel too good there, but I think it was a super quantifiable run where there’s things I can work on, but other things I feel good with. I’m super happy with it.”

The podium is his second of the Summer Series. He is one of the series’ big winners, having come first in the legendary return of the Psychosis DH race.

“I was definitely more nervous in the hot seat today than I was in Psychosis, just cause, I was a bit more surprised in Psychosis…it was just so long. I was so worked. All I was focused on was just trying to cool down for the next 20 minutes after my run. I was still pouring water on myself.”

Behind Fitzgerald, another memorable performance.

Kirk McDowall had to drop in unexpectedly last after a mishap on his first run.

“It got quite windy right before we started going, and one of the aluminum banners fell onto the first corner on the course,” said McDowall. “I couldn’t see it until it was too late. Thankfully I didn’t crash, but the bike took a hit and really bent the front brake rotor really badly. Someone was able to bring one up for me and we swapped it out at the top. That was a new experience for me, but it turned out OK.”

McDowall ended up finishing his day with a 4:33.52, earning him the final podium spot.

“I feel like my brain has been going a hundred miles a minute. Of course during the run it always is but now this time the 10 minutes leading up to to run as well I was just stressing. It feels like kind of a relief to just be down here now. It’s nice to be in third for sure. I had a good run.”