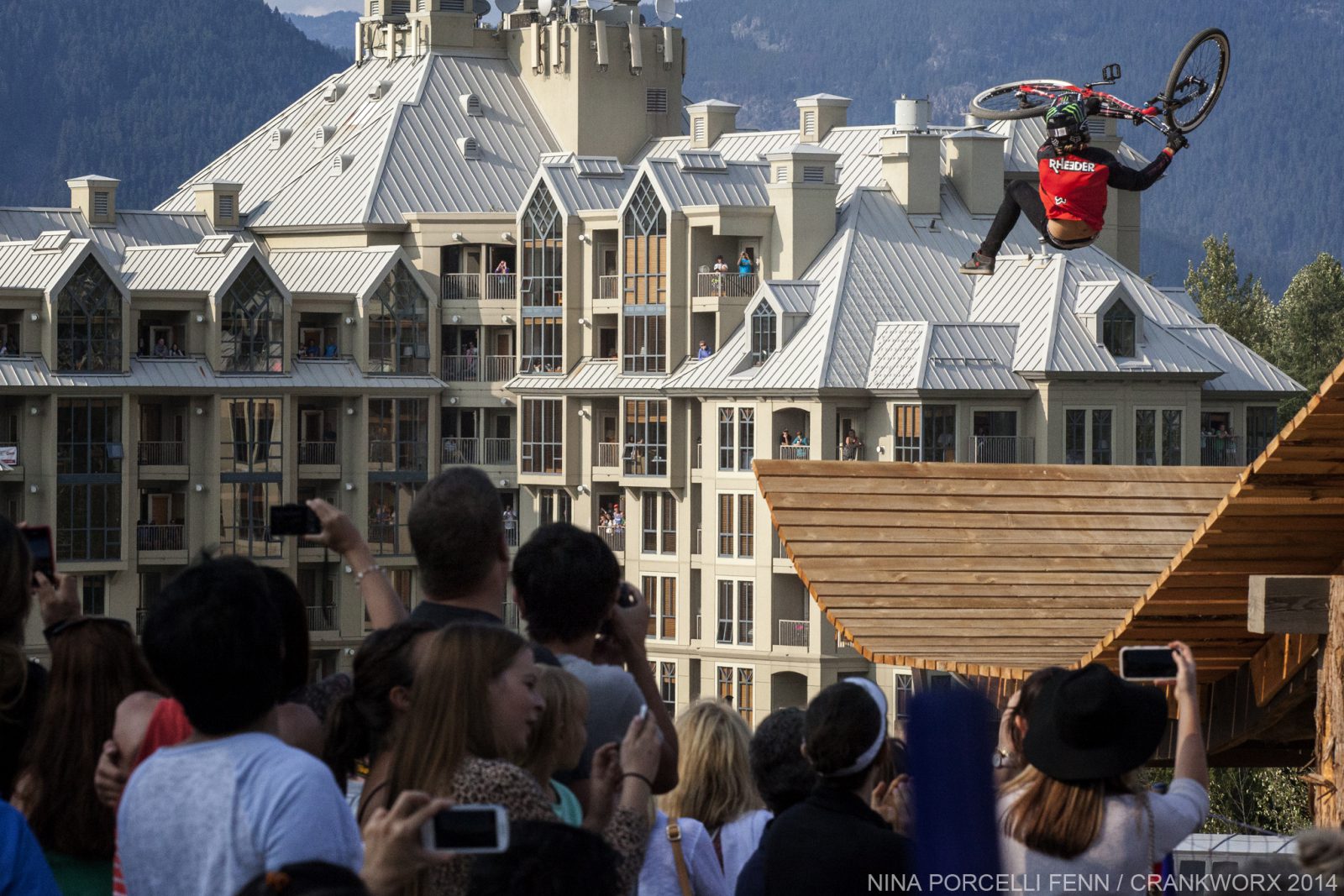 Munich, August 10th 2015 – Slopestyle is coming home. All eyes will be on Brett Rheeder in Whistler this year at Red Bull Joyride. On Saturday, August 15th the Canadian athlete can walk away with the Crankworx Triple Crown of Slopestyle, as well as clinch an early FMB World Championship title. Brandon Semenuk (CAN), Thomas Genon (BEL) and Nicholi Rogatkin (USA) are among the top riders standing in Rheeder’s way to glory. All the action from Crankworx Whistler will be streamed live on RedBull.TV, Crankworx.com and fmbworldtour.com

After three amazing rounds of elite slopestyle action, the FMB Diamond Series now lands in North America for Red Bull Joyride at Crankworx Whistler. Competing at this event can be an athlete’s career highlight. Winning it makes you a legend. For Brett Rheeder (CAN), a victory at this FMB Diamond Series event will award him with the inaugural Crankworx Triple Crown of Slopestyle title and 75,000 $CAN, as well as potentially seal an early victory of the FMB World Championship. So be prepared, Crankworx is coming! Check out the teaser Red Bull TV has prepared for this ultimate slopestyle contest here: www.crankworx.com/videos/241

For Brett Rheeder, the man to beat for the Crankworx Triple Crown of Slopestyle will be Brandon Semenuk, who has already won this event three times and is no stranger to performing under pressure. Breathing down Rheeder’s neck for the FMB title is the Belgian rider, Thomas Genon who won Red Bull Joyride at Crankworx Whistler back in 2012. Just 500pts shy of Rheeder’s top spot, Genon will be turning up the pressure on August 15th. Sitting in third place, 858pts behind Brett Rheeder is Nicholi Rogatkin. The American rider from Boston knows that this final slopestyle contest is his best chance to stay in the hunt for the FMB World Championship. A win at a FMB Diamond Series contest is worth 1,000pts, so all top three athletes are still in contention for the overall title, but with Rheeder’s impeccable riding, there is no room for mistakes. The full FMB Diamond Series ranking is available here. 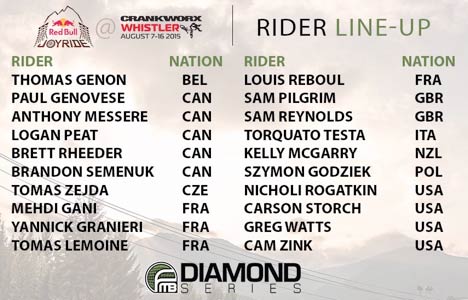 Red Bull Joyride at Crankworx Whistler can be a breakthrough contest for many riders. Performing well this season is fellow Canadian Logan Peat, currently ranked 4th in the FMB Diamond Series. The British rider, Sam Pilgrim appears to also be feeling confident and eager to lock down another solid Diamond event result. Having his best year yet is Czech rider, Tomas Zejda, just outside the FMB Diamond Series top 5 in 6th place. Winning the event wildcard at the Colorado Freeride Festival two weeks ago is the Italian rider, Torquato Testa. With such a stacked line up, the names go on and spectators are guaranteed to witness the pinnacle of mountain bike slopestyle.

You don’t need tickets to see the action. Red Bull TV will be streaming the contest live to viewers around the world. Check out the global viewing times below and tune in on RedBull.TV,Crankworx.com or fmbworldtour.com to make sure you don’t miss out.

Useful links:
Follow Redbull.com.bike for all the clips and news as Red Bull Joyride draws closer.
Check out pinkbike.com for all the news and photo stories.
Event information can be found on Crankworx.com
For information on the Triple Crown of Slopestyle: Crankworx.com/series-events/triple-crown-of-slopestyle
More information about the FMB Diamond Series can be found on the, FMB World Tour website: www.fmbworldtour.com
For news and updates follow FMB World Tour on: www.facebook.com/fmbworldtour & www.twitter.com/fmbworldtour and Instagram