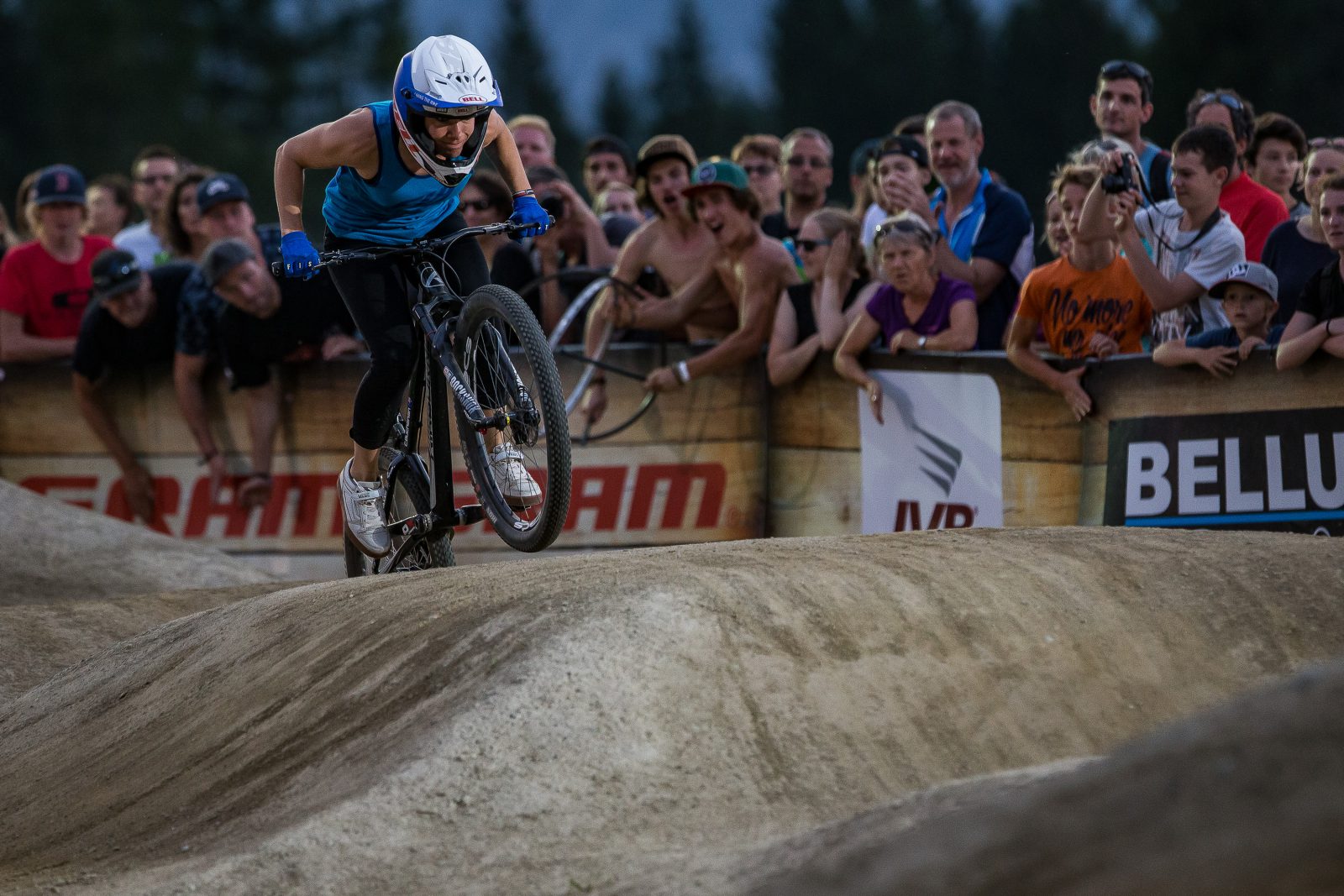 French pump champion solidifies his status on the Crankworx World Tour, sweatpants and all

FOR IMMEDIATE RELEASE
Innsbruck, Austria; Friday, June 23
— Pulling herself up into a manual and stretching for the line, Australian Caroline Buchanan bested American Jill Kintner on the Innsbruck pump track in such a photo finish squeaker of a win, it could not be detected by the naked eye.

The pair appeared tied in the first round of the final, with announcers only later stating the timing equipment revealed Kintner to be ahead by six thousandths of a second—the onscreen graphics only reporting to the hundredth.

As Buchanan’s wheel crossed the line, she paused to see the score, +0.03, then leapt into the arms of her fiancée, Barry Nobles (USA), who shared the podium, coming in third.

“I knew it was going to come down to the final and, for me, I think I had the confidence, knowing that jumping into the first corner would help me gap away. I knew I kind of have that strong BMX finish, and really, I just pushed with those manuals,” said Buchanan, beaming for the cameras.

The women have become the story of the year in this sport, they are so perfectly matched. Both come out of BMX. Both are two-time Olympians, though Buchanan directly from the Olympic scene last year. Both have a string of pump track wins to their name, and both are vying for the Queen of Crankworx and Crankworx Pump Track World Title with the kind of voracity one doesn’t often see on the mountain bike scene.

“It’s like racing myself, almost, our paths are so similar,” said Kintner, noting their races seem to just come down to the moment, everything on the line in the final run every time.

While the races haven’t come to quite the hairline differential in the men’s field, the top four racers are so close, the final heats are certainly revealing some consistencies. When American Mitch Ropelato enters, he’s almost always top-four. Adrien Loron (FRA), who finished just off the podium in fourth Friday evening, is a staple in the finals or semi-finals, as is Barry Nobles, and of late, Chaney Guennet (FRA). The young Frenchman wowed the crowd with a second place finish in Les Gets last week, a win at the French stop last year, and the evening’s first place finish.

“It’s a really, really hard track, so it’s perfect,” said a sweat-short clad Guennet, whose attire had been generating quite a lot of attention until Ropelato showed up in Lederhosen.

Ropelato made a slight mistake in the finals to find himself in second, and said he thought the track was, rather, too easy, suggesting if the courses got a little more gnarly, they might separate the wheat from the chaff.

“I think we need to get the wheels off the ground a bit more,” he said. “…For the top four dudes, it’s like anybody’s game. Once we get down to those top four, I think some jumping and some other stuff that could separate us—other than mistakes—would help. As cool racing as that is, it kind of sucks to watch someone make a mistake, so it’s just like make the tracks crazier, and it will start showing through whose the better jumper, whose the better turner.
The Raiffeisen Club Pump Track Challenge presented by RockShox was the third event of the five-day inaugural Crankworx Innsbruck, which will see schedule changes all weekend, due to weather.

FINAL LIVE BROADCAST: All four events in the quest for the Triple Crown of Slopestyle are broadcast LIVE on all your devices exclusively on Red Bull TV. The Crankworx Innsbruck Slopestyle presented by Kenda is our final event in Europe. Please don’t miss joining us tomorrow: