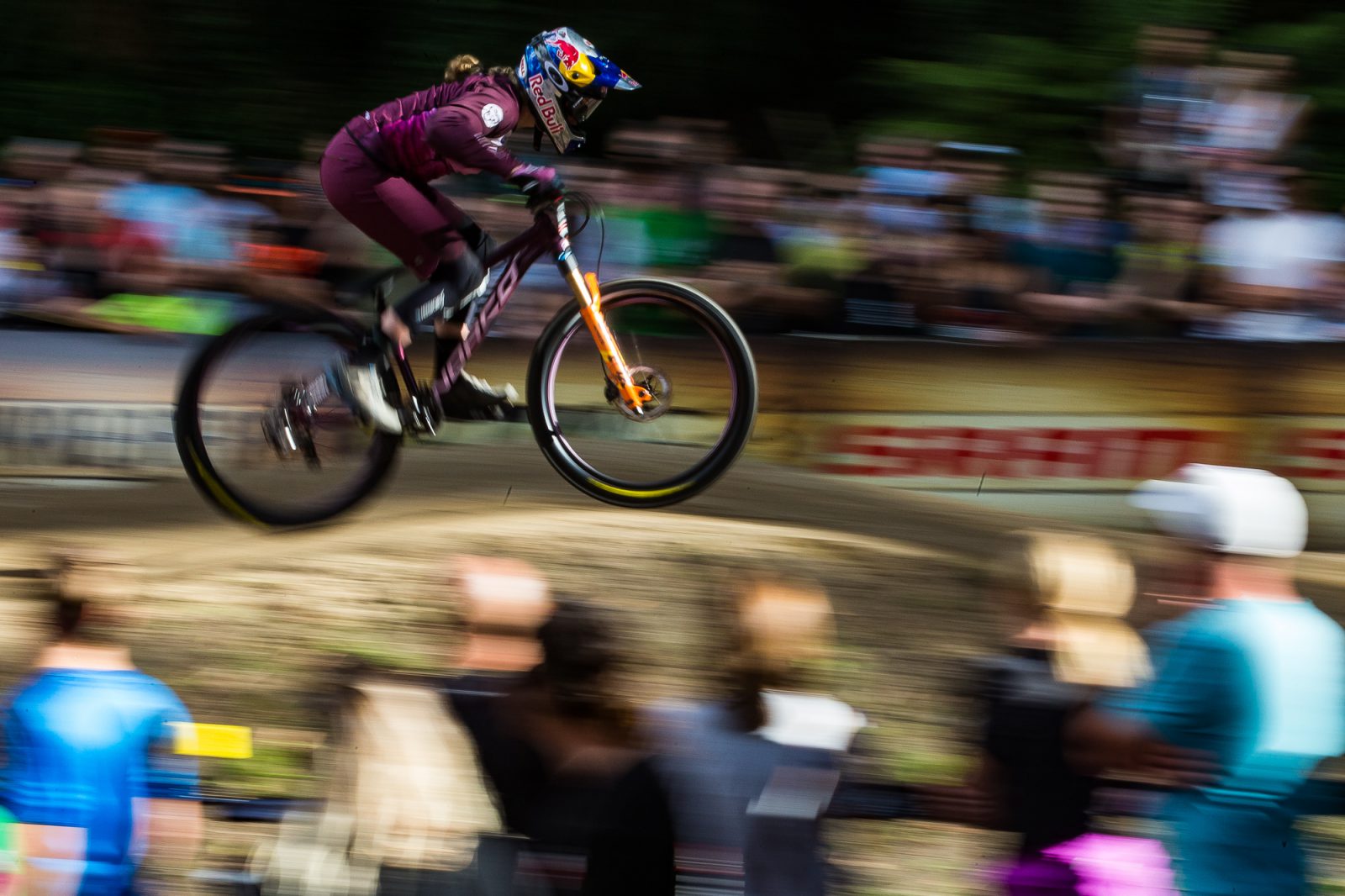 Tonight’s win marks the sixth consecutive win in the discipline at Crankworx for Kintner, who’s claimed the top step every year in Whistler since 2013. As for Slavik, he won in Whistler in 2016 and 2017, making tonight a three-peat in Crankworx Dual Slalom competition.

But while the Queen prevailed, the battles were tight. Second place finisher Kialani Hines (USA) proved a worthy opponent for Kintner, finishing just 0.28 seconds behind her in the first heat and 0.85 in the second.

“There was fierce competition today,” said Kintner. “It’s cool to see such talented ladies from all disciplines, and a few fresh faces.”

One such face was Tahnée Seagrave (GBR).

“I snapped my chain in the semis. I would’ve liked to have made it into the final with Jill, because you know she’s the one to beat and I’ve looked up to her for a long time in my career. It would have been sweet, but there’s always another one.”

In the end Seagrave claimed the final podium spot after beating Danielle Beecroft (AUS) in both rounds of the Small Final, an accomplishment that left her smiling ear-to-ear.

“Tonight was amazing overall. I’ve never done anything like it. It was really chilled. Everyone’s smiling. Great atmosphere. I loved it.”

Not only was the event Seagrave’s first foray into the discipline, it was also her first Crankworx (“I might have done one when I was really little but I really can’t remember!”) on her first trip to New Zealand.

Competition on the men’s side was arguably even more fierce, with a who’s who of international mountain bike competitors spanning all ages and disciplines, including Mick Hannah (AUS), Kaos Seagrave (GBR), Barry Nobles (USA), Darren Berrecloth (CAN), Adrien Loron (FRA), and Bas van Steenbergen (CAN).

“This is what’s really special about Crankworx,” said Slavik. “This is the place where we meet together and we race against each other…this is pretty unique and pretty special. And the racing was amazing today. There were so many fast guys. Really hard race.”

The Big Final on the Pro Men’s side came down to Slavik and Kyle Strait (USA), who had won all his heats to that point, save one against Matt Walker (NZL). Slavik would take both rounds.

The battle for third came down to the wire. Luca Cometti (USA) and Walker traded wins, but in the end, Cometti edged out Walker by 0.09 seconds.

The track itself featured four distinct sections: berms, rollers and rhythm, then flat corners, finishing with a table top before racers crossed the finish line into a sea of groms looking for fist bumps and autographs. Slavik said the style of the Rotorua track added to the rivalries.

“You had to go without any mistakes,” said Slavik. “You had to go super fast, 110%, which is what Dual Slalom is all about. It was amazing.”

A crowd of nearly 1500 local and international fans came out to watch the action go down on the all-new track, built by trailbuilders Empire of Dirt as a legacy project for the community in Rotorua.

“I’m really happy that we’re bringing more Dual Slalom competitions into Crankworx,” Slavik added. “It’s like old-school and new-school stuff coming together, which is really working. People are loving it and the riders are loving it.”

Slavik’s podium topping performance marks his first points in the battle for King of Crankworx, and Kintner’s second. She now solidifies her third place standing with 225 points, behind Vaea Verbeeck’s (CAN) 265 and Casey Brown’s (CAN) 325.

Other key points awarded after tonight were 50 earned by Walker for his fourth place finish, bringing him up to 205 after a weekend of Enduro and Downhill, behind Keegan Wright’s (NZL) 275 and Sam Blenkinsop’s (NZL) leading 300.

Up next, Crankworx Rotorua action shifts to Skyline Rotorua MTB Gravity Park for the next five days of competition.

“I can’t wait,” said Seagrave. “I literally can’t wait to get started.”