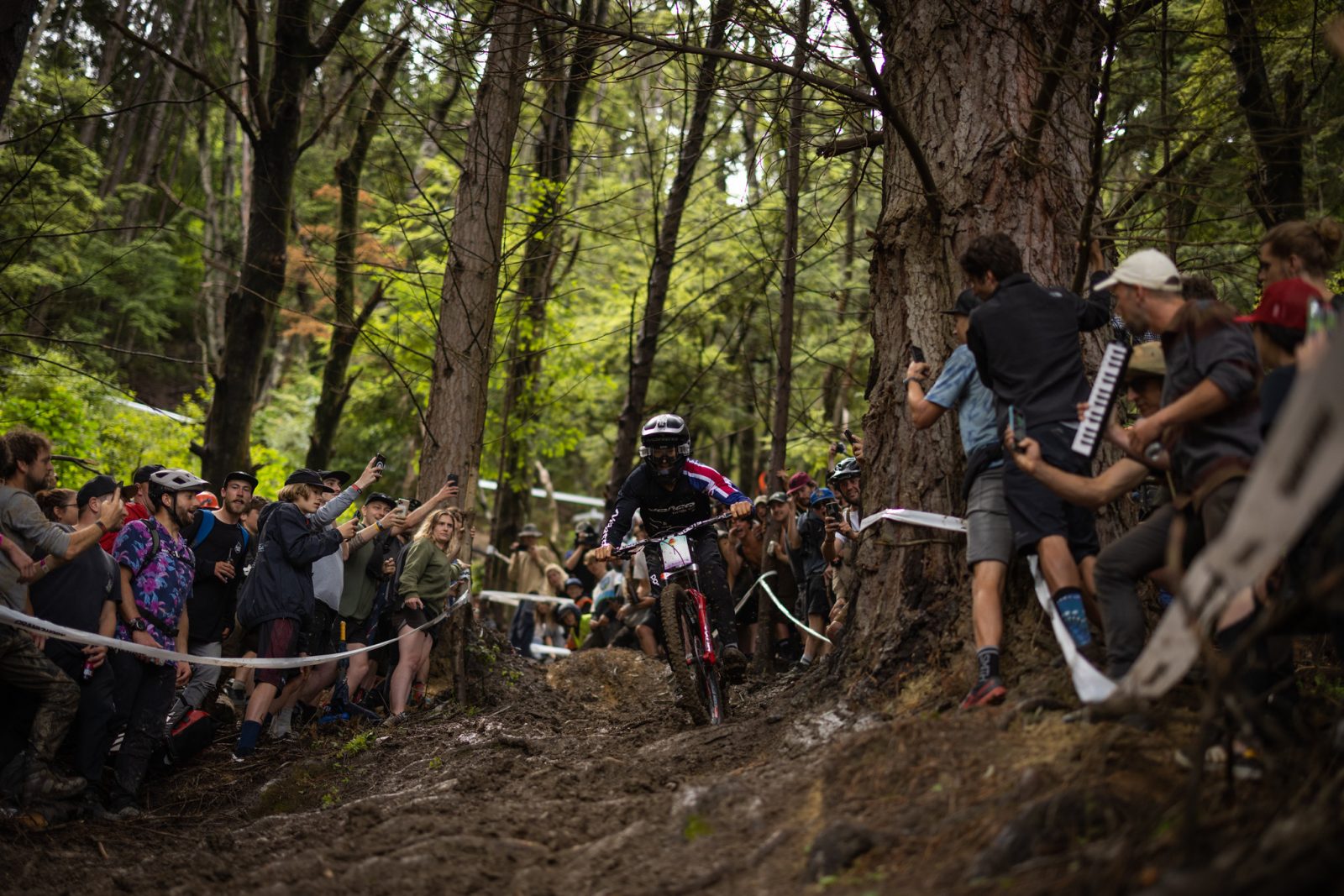 Queenstown, New Zealand, December 6, 2021 – Along with great battles, standout performances, new tracks and good times, racing at the second stop of the Crankworx Summer Series New Zealand in Queenstown will be remembered for one additional unique feature: the return of the roar of the crowd.

It’s a sound that’s been mostly missing. In closed venues athletes have raced cheered on by fellow competitors, support crews, volunteers and organizers. On public land, those in the know, the die-hards, have shown up to ring their cowbells and shout ‘til they’re hoarse. But this past week in Queenstown, things got next level.

Friday, a limited crowd of ticket holders got up close and personal with the tight battles of the Queenstown Pump Track, cheering on Kialani Hines’ return to the top step and Tuhoto Ariki Pene’s first Crankworx win. The following day, a wall of sound ushered the winners across the finish line in the Queenstown DH, with Louise-Anne Ferguson and Sam Blenkinsop taking the Ws in a rowdy race for the ages.

“I actually cried at the bottom because it was so good,” said Scottish rider turned Queenstown local Ferguson, her grey kit caked in mud in the finish corral of the Queenstown DH. “They were just lining the tracks and heckling and getting all the hype up. World-class.”

“It was strange because it was one of probably the only stretch you could actually see quite a lot,” said Blenki of the rowdiest section where hundreds of fans showed up. “And they could see you coming. So I was coming into the straight, probably 20 seconds before, and you could already hear the crowd going nuts, so I was like ‘Oooaa, I better ride good here.’ So I just kind of rode that section really good and I was stoked. Sick to have crowd back. I guess we had some at World Cups, but it’s different in at home in New Zealand. It’s like your mates watching you, your family and your friends, so it’s cool.”

Blenkinsop said it was one of the funnest race runs he’s had all season.

“I’m stoked. It was hard because I didn’t know what to expect really. The trail was really wet this morning. I thought it was going to be still really wet, but it kind of started to dry out, so I just rode the best I thought I could ride. I did that and didn’t make too many mistakes. I guess you can’t really have a perfect run when conditions are like this. But man the track was so fun. The guys have done an awesome job here. Seems like every Crankworx race I’ve ever done has been awesome. And awesome to have the crowd here.”

Ferguson described the track, which saw racers tackle 2.7 km of Skyline Queenstown’s infamously steep trails, as “spicy” and said she didn’t expect to take the win.

“I actually crashed and by the time I came down I had had a good run, but with the crash I just thought it was going to be a bit of a chiller and all the other girls were going to come down and take the hot seat, but yeah it was good!”

Blenki added that part of the challenge of the day was to adjust to the changing track conditions. Friday’s practice dirt was prime. Saturday, change was the only constant.

“First practice run was starting to get a little bit wet, well it was wet, but it wasn’t that bad. It had the amateur training on it, so the ruts were a little bit different. And then the second practice run I put both mud tires on, and it was fully a wet track, so it felt good and grippy. It was more grippy than it was yesterday in the dry. So I was like ‘Oh man, it’s going to be awesome.’ That’s the kind of stuff I like when it’s got really rutty and you’ve got support. So I was like ‘the final’s going to be a big rut, so you’ve just got to ride the rut and not fight it and just relax,’ and that’s what I did.”

The day prior, the weather was prime. A Queenstown sunset, and a small sold out crowd, ushering riders across the line.

“It’s my first gold medal at Crankworx,” said Rotorua’s Pene, stoked on his win. Recently he’s managed a fourth on the Pump Track in both B.C. and Rotorua, and a second place finish in the Rotorua Dual Slalom. His strong results this season managed to push him into second for the overall King of Crankworx this season, but a first place finish still eluded him. “It feels awesome, ay. I finally got there. Yeah, nah. I was happy. Blown away. I was feeling pretty tired today, but just pumped it out hard on the last one and made it through.”

“Rotorua was great,” said Hines, comparing her results today with last month. “I qualified first then ended up in second, so it’s always kind of a bummer. Coming here I definitely wanted a win, so I’m very happy with that. It was a good race. All the girls were super close, so I enjoyed it.”

“Track was fun,” added the pro women’s winner. “It was a little wet in the beginning of the day, but it actually held the water great. And then the weather kind of ended up being perfect for racing. Awesome track and good, tight racing.”

Weather dependent, the track was set to open to the public today, giving the community in Queenstown another feather in its MTB cap.

As the Summer Series NZ heads into the final stretch, with three of five races done, the overall points leaders of the series are starting to emerge.

The pro leaders after three are:

Next up, action rolls on first to Cardrona for the Air DH, before wrapping in Wānaka with the Dual Slalom.