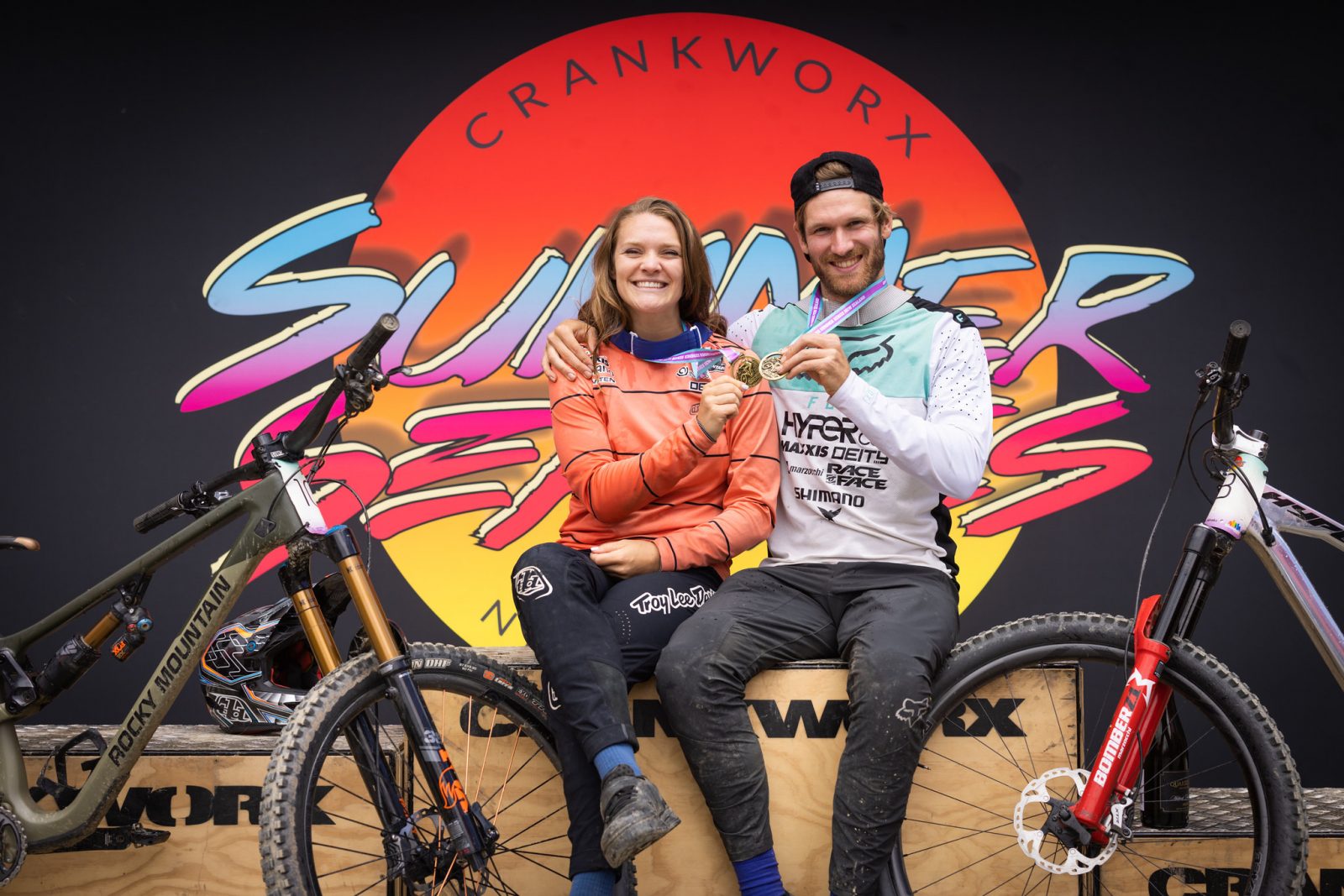 Cardrona, New Zealand, December 11, 2021 – The penultimate race of the Crankworx Summer Series New Zealand, as well as the 2021 MTB season, has wrapped from Cardrona Alpine Resort, with the King of Queen of Crankworx claiming victory over a rowdy high-alpine Air DH track.

Bas van Steenbergen laid it all out on the line to beat Sam Blenkinsop, who qualified first, by a hair, while Vaea Verbeeck rode with precision to keep her #1 seeding spot.

Van Steenbergen’s time now stands as a new course record. Going into the event the record of 3:35 had been held by Matt Walker. Sam Blenkinsop set a new record with a 3:24.39 in seeding. Van Steenbergen came out focused and swinging on race day, his 3:20.50 1/10 of a second faster than Blenki.

“I was not too sure if I could get him actually,” he said of his mindset after seeing Blenki’s seeding time. “He had a pretty decent gap on everyone yesterday. So I watched a tonne of GoPro footage and figured out a couple little lines. There were a couple things that I did a tiny bit different today, and just came in with more confidence on some of the turns. But it was hard. I knew I had to put down a heater of a run to beat him, so I’m stoked that it worked out. Just.”

The track itself, linking Cardrona’s Mile High with Morning Glory, is 2.5 kilometres long with 38 jumps and two drops for riders to tackle.

“It’s real physical at the bottom,” he said of the track. “The top is pretty technical, so it just kind of lulls you in and you kind of forget to breathe. Then the bottom section is so physical and it just kind of sneaks up on you. It was pretty gnarly.”

And while van Steenbergen was pushing to improve, Verbeeck was focused on keeping the consistence she achieved through practice and seeding. She came first in seeding, managing to repeat in finals, improving her time in keeping with the faster-running track conditions.

“I think both were very similar,” she said of the practice/seeding day and finals. “The work was in practice. Yesterday was figuring out the jumps and clearing them. And I managed that in practice yesterday. So for seeding it was clean. For race day it was a lot faster, so we had to figure out how to squash them or brake enough not to overshoot them and at the race, same, trying to stay clean. On the first jump I think I way overshot and went nosey because I was braking into it. So right away, first jump, I was like ‘Tone it down’ because it was running a lot faster and you don’t want to brake off the lip, you want to brake beforehand.”

“It was a challenge yesterday and then it was like a different challenge today” she said of navigating the changing conditions. The “Summer” Series ops crew set up for the race in snow earlier in the week. By practice day the snow had melted, but the track was still drying out, leading to prime conditions on race day, which also coincided for opening day at Cardrona.

“But that’s fun,” added a smiling Verbeeck, who was clearly having in her groove on race day. “That’s why we race mountain bikes. It’s always different.”

The other podium finishers for the pro women also repeated their seeding finishes. Jenna Hastings knocked a whopping eight seconds off her seeding time, finishing less than a second behind Verbeeck, while Casey Brown also took six seconds off her time.

As the Summer Series NZ heads into the final stretch, with four of five races done, the races for the overall and heating up and getting tight.

The pro leaders heading into the final stretch are:

Next up, action rolls on to Wānaka with the Dual Slalom. Spectators have been invited to come out and watch, while the world is invited to follow along with a live broadcast on Crankworx.com.