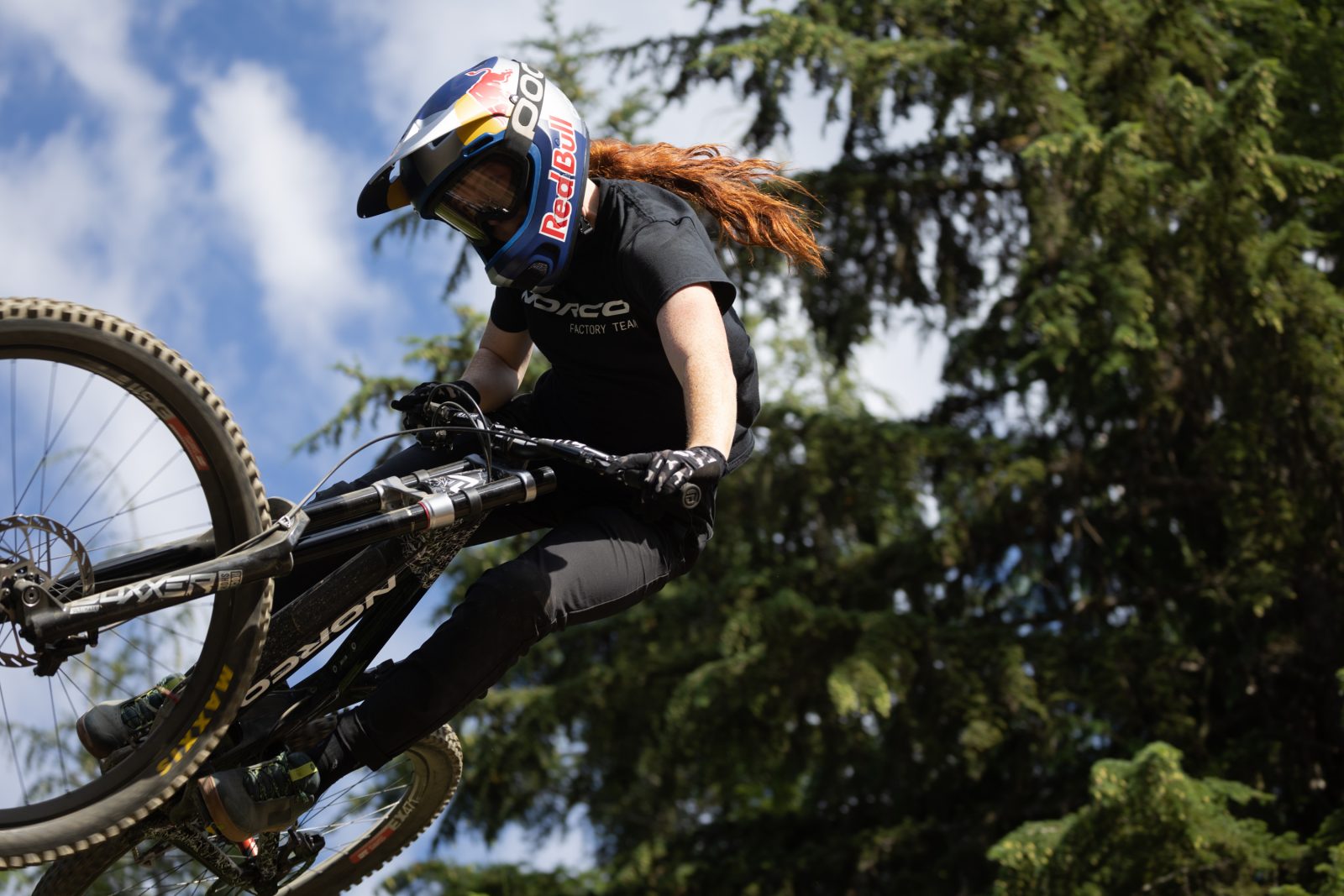 Plus, Gracey Hemstreet awarded a set of wiiings to go with her shiny bronze medal.

WHISTLER, B.C., August 12, 2022 – The vibes were firing today at the Official Whip-Off World Championships presented by POC with the largest whip-off crowd in Crankworx Whistler history. Jackson Goldstone won it for the locals with his unmistakable ability to go sideways on Whistler Mountain Bike Park’s famous Crabapple Hits.

“Second gold-medal on the Crankworx World Tour this year and it was even better to do it at the home town,” the Red Bull rider said of taking first place today in the men’s category. “It was such a good day, the crowd was really hyping me up, and had a really good time.”

There was some serious style from heavy hitters in the female category like Casey Brown, Harriet Burbidge-Smith, Robin Goomes. It felt like a proper homecoming reunion on the course today. Vinny Armstrong dominated, earning her third Whip-Off gold medal since she started competing at Whip-Off in Les Gets in 2018. Even with the wind picking up, Armstrong remained cool and collected to throw down the best whips of the day.

“It was a little bit windy, so I felt a little bit sketchy, but I definitely felt like I got a couple good ones, so I’m stoked on that,” the humble kiwi commented on her first-place finish. “The crowd’s so hectic, this is huge compared to 2019. You can barely push up to the top because there’s so many people, and even dropping in, it was impossible to do a solo lap because there were so many people.”

There were endless party trains, a few nac nacs, no-hander landers, and even yesterday’s Speed & Style gold-medalist Tomas Lemoine casually ripping Crabs on his dirt jumper. The freeride legends were putting on quite a show for the sea of spectators.

“The vibe is definitely back,” the Red Bull rider, Goldstone, said of the energy from the crowd. “We had a couple years off, but we came back strong! It’s great to see how many people turned up and it was cool to be mid-air and all you can hear is a massive roar. It’s a great feeling.”

“I was just at the top of the whip-off course waiting, and then Brandon just came up to me, and everyone was surrounding us,” 17-year-old Hemstreet recounts. “I was thinking ‘oh my god, oh my god’, and then he told me to open the bag and there was the Red Bull helmet there. That was pretty insane! Then I just did some whips and had the best time ever.”

A bronze-medal at the Whip-Off World Champs, a Red Bull helmet, sick whips, and good times. Not a bad way to spend a day here at Crankworx Whistler. Hemstreet still has the RockShox Canadian Open DH coming up this Sunday, and she is currently the first place seeding position.

“I’m super psyched,” Hemstreet said of the downhill practice and race on her horizon for the weekend. “Especially with downhill – it’s my thing. I’m just really excited. We will start with practice tomorrow and see how it goes.”

We are now moving into the final weekend of Crankworx Whistler with only two broadcast events left on the schedule. Beginning tomorrow with the big show. The moment the world has been waiting for since August 2019 – Red Bull Joyride. Spectators have the option to view Red Bull Joyride from Skier’s Plaza (also known as the bottom of the Boneyard) or to hike up the mountain to watch beside the fences. Be sure to tune in if you can’t get to the boneyard in person. Red Bull Joyride will be broadcast live on crankworx.com and Red Bull TV.