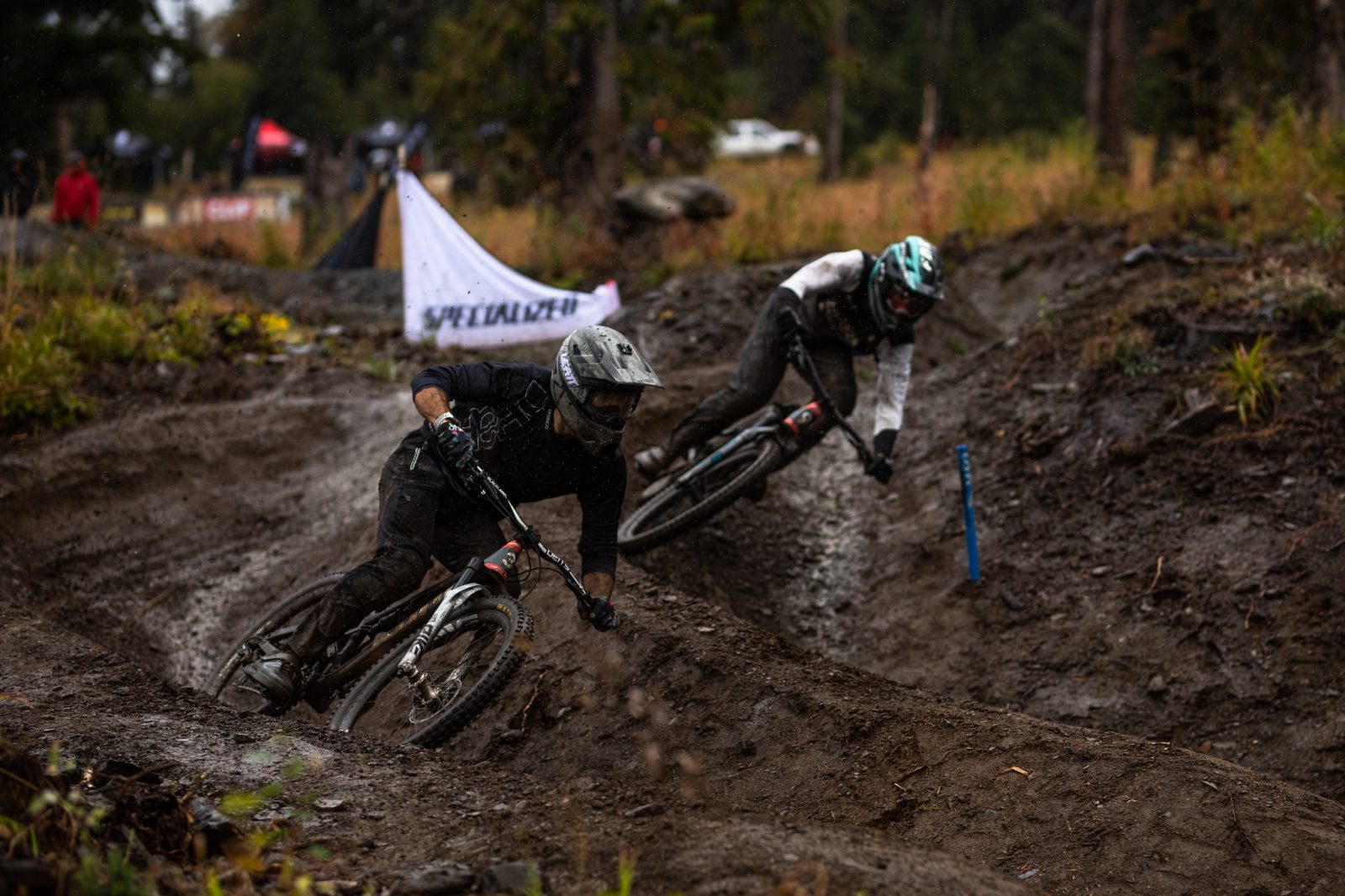 SILVERSTAR, BC, September 30, 2021 — In the first day of Crankworx B.C. competition at SilverStar Mountain Resort, Jackson Frew has earned his second Crankworx gold of the series, while Kialani Hines claims her first career Crankworx Dual Slalom win. The Specialized Dual Slalom SilverStar kicked off the action at the third stop of the series, on a track built by Bas van Steenbergen for Crankworx in 2020.

“We pulled up and the dirt was perfect,” said Frew of the morning’s practice. “We had a bunch of rain overnight. I started gelling with the track really early and felt really good. I think I had an early practice run against Tomas [Slavik] and was pretty close, and I thought ‘this could be good.’ I hit the triple down the bottom and felt really good. Just kept carrying it through the day.”

Frew would wind up qualifying in second with a time of just over 50 seconds, 1.26 seconds behind van Steenbergen.

As qualies wrapped and athletes began to gear up for finals, the weather took it up a notch. The light rain that had been falling all morning intensified, bringing with it thrills, squeaking breaks, spills and, in the words of Frew: “Really, really, really good fun.”

The #1 and #2 qualifiers continued their dominance, in the end facing off in the finals for the gold.

“As soon as you get into a finals with Bas you know you’ve just got to send it,” said Frew.

“It was a wild day,” said van Steenbergen from the finish corral, race kit and face spattered with mud. The Canadian won on the course last year, and also won the most recent Slalom race at Crankworx B.C. in Sun Peaks.

“I was pretty messy throughout all the runs,” he said of the conditions. “Hats off to Jackson, he was flying. Both my runs in finals were pretty damn good and he laid it down.”

“There was one turn in particular on the left into the long rhythm that I was pretty cautious of and made a few little mistakes on through the race,” said Frew of the mud. “So, I was definitely more cautious through that. But the rest felt really grippy. I felt like I could push as hard as I wanted to and it was going to stay with me, so once I got through the first few turns and got through that sketchy one on the left, I knew I was really confident and able to really push.”

The Australian’s push did the trick. He clocked in 0.38 seconds ahead of van Steenbergen in finals.

“I didn’t really know where I was coming into it,” said an elated Frew of Crankworx B.C. overall. Today marks his third podium of Crankworx B.C., and second win. “I think I had a slow start at Slalom in Sun Peaks and was a bit disappointed. Then just with Air DH and the DH at Sun Peaks, I just kind of building and kept going and kept going and got better. Yeah. I’m over the moon. I came in with no expectations whatsoever and didn’t know where I was at, so to be just mixing it with such a good field is awesome. And to be up here winning is even better.”

“It changed a lot this afternoon with the rain, but to me I preferred it because it added more variables,” said Joe Breeden, who faced off against Tomas Slavik in the small final for Bronze. “It was easier to push someone into a mistake, and you kind of had to just be consistent and smooth. As a downhill rider, it’s kind of what suits me better.”

“I’m happy I kept it smooth and pushed Slavik into a mistake,” he added of a fall Slavik took on their final matchup. “It’s a shame we couldn’t battle it to the end, but I’ll take third. I’m happy with that.”

Like Frew, today’s finish makes it three medals for Breeden, including a win in the Mt7 Psychosis DH on the weekend.

After the first few runs in finals, the top women voted to call it, deferring to qualifying results to determine the finals results.

“Practice was awesome. The dirt could not have been any better. It was perfect. The track was fun, but obviously it got really wet,” said Kialani Hines, who qualied fastest with her time of 56.99 seconds. “I think the majority of the girls just weren’t comfortable racing which, I respect that. So we went off of qualifying. So it worked out for me. I would have raced and been stoked about that, but I think it was just more about safety today, so yeah, not a bad day for me.”

The first place finish is a first for Hines, who finished third in the discipline in Sun Peaks last week.

“This is actually my first Slalom win. I’ve gotten every other place for Slalom with Crankworx, other than winning. So, it’s a little bittersweet because obviously I want to win it, you know, legit, and prove that I can do that, but I also can’t complain. I’m riding fast enough to win. I’ll just take it.”

Today’s results cause a bit of shuffling in the overall standings for the King and Queen of Crankworx.

Frew moves up to second, with Breeden a handful of points behind him. Similarly, Brown sits just above Hines in second, but by a very small margin.

Next up, competitors will take to the Pump Track for the first time during this race series. The RockShox Pump Track Challenge SilverStar will be live on Red Bull TV tomorrow.