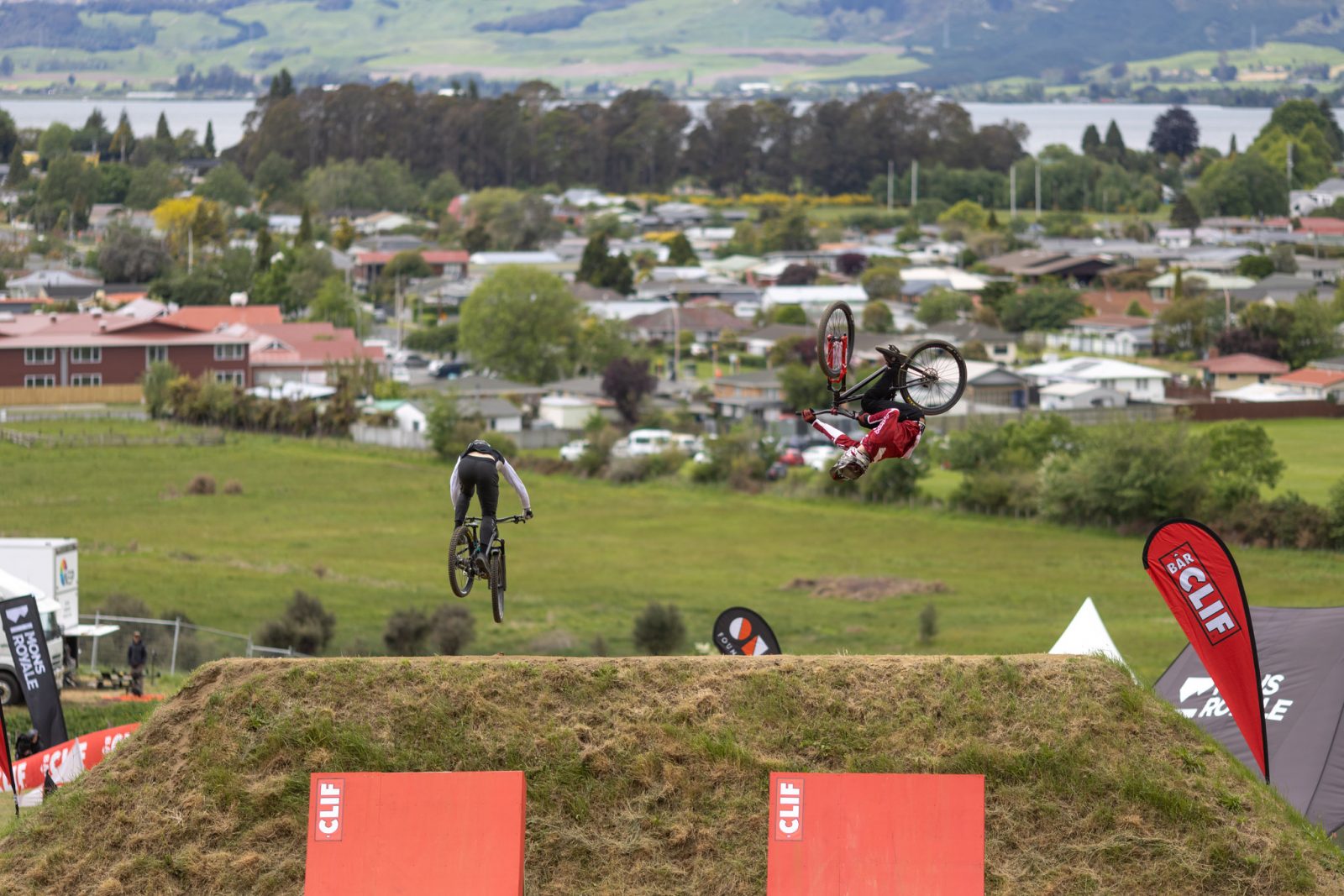 Kicking off the day, the Speed & Style challenged competitors on all fronts, with riders pushing through and throwing down amidst: wind, rain, delays, and competition from the best in the world.

The last man and woman standing through it all? Harriet Burbidge-Smith and Billy Meaclam.

“It was a mental battle, from pretty much yesterday morning ‘til now,” said Burbidge-Smith. “Are we riding, are we not riding. The wind’s good, the wind’s bad. The rain’s on, the rain’s off. It’s more wind again and people are crashing. It was gnarly.”

Finals were meant to run yesterday but were delayed due to the conditions.

“I think all the girls showed that [mental toughness] to be honest,” said the Australian women’s winner of what it took to keep at it today. “With it being such a new thing, Speed & Style for the women, that we’re battling through the wind and battling through crashes and everything like that. It’s hard to train for that. You have to kind of be in these moments a bunch of times to get better at it I guess. I’m happy that I got through the day.”

“I’m super stoked, but at the same I do feel for those girls,” she added of her fellow competitors whose days didn’t end as planned. “They’re some of my best friends and I’m just hoping they’re all good.”

The world’s eyes had been on local Rotorua rider Robin Goomes, who threw down the first backflip by a woman in competition at Crankworx Innsbruck earlier this year, and Caroline Buchanan, who made history with the first front flip by a woman at the Audi Nines competition this summer. Goomes crashed earlier in the day today and as a result didn’t secure a qualifying spot. Buchanan was climbing the ranks in finals, but went down on the first jump in her matchup against Vaea Verbeeck.

On the men’s side, it was a similar story of big tricks and big spills on the way to the top.

Matt Begg and Tim Bringer both went down in their first matchup in the Round of 8, with Bringer crashing again in their second. Begg then went down against Tomas Lemoine in the next round, with the Frenchman then charging his way into the finals against past winner Billy Meaclam.

In their finals matchup Lemoine crashed out, and Meaclam was able to claim his second Speed & Style victory.

“It’s déjà vu. It’s pretty surreal,” said the New Zealander. “It’s just a really fun day up riding with everyone. This is one of my favourite events. You get to go really fast with your bike and still have fun doing tricks.”

Like the women’s winner, the 22-year-old said to get to the top it took a mix of speed, tricks, mental strength, and the added mental game to push through the conditions.

“We had pretty awful weather conditions for the last two days,” he added. “The wind was pretty gnarly, but luckily the tricks I was doing, it didn’t concern me too much. I’m pretty pumped we got to wait another day and do it under better conditions. The rain today just before finals played a little bit with everyone’s heads. I know a lot of the athletes up the top were pretty off it, me included, but it turned out to be perfect and it couldn’t have gone any better. I come into each jump with two tricks in my head. If it is super windy and getting gnarly I’ve got a safety trick…Plan A was a truck to X up on the first one, it scores pretty decent. And then the last one was a flat spin table top. It’s pretty safe and kind of works every lap. And then a backup would be a flip can up the top, and keep it pretty similar down the bottom.”

“I’m so happy,” he said of having Crankworx back on home soil. “It’s been a long ass time that I’ve ridden a Crankworx event. I’ve been stuck in the country since COVID happened. It’s been pretty cool to be back riding with all the pros again.”

Behind Meaclam and Lemoine, Bas van Steenbergen rounded out the podium, having beat New Zealand’s Matt Begg in the small final.

With barely a moment to spare after the podium, racers made their way to the top of Mount Ngongotaha to tackle the DH in much different conditions.

For Downhill practice, Spring in New Zealand had queued up perfection.

The Pro Women’s field and the first of the top men were served up tacky spring dirt. And then the rain came.

“In the gate it wasn’t really raining,” said New Zealand’s Louis Hamilton. “I could see it was, and probably maybe 30 seconds into it the goggle lens started filling up with a bit of rain. I entered the woods with a few speckles on the lens but could see. There weren’t too many issues with vision. Certainly coming out into the open it was wet.”

Hamilton clocked a 2:51.038 and moved into the hot seat. And then the skies opened in earnest. The rest of the field battled through the wet, no one able to beat his time.

“It’s always been a dream, but to win in those conditions…it’s pretty unlucky for the field,” he said. Past winners and other top riders including Sam Blenkinsop, George Brannigan and Brook Macdonald dropped in after, their times slowed by the conditions and 6+ seconds behind. “I guess for me it was good luck, and you’ve gotta take the wins where you can…it’s still work to try and win. It’s pretty surreal at the minute. It hasn’t really sunk in.”

Another racer in disbelief at her win, the women’s winner. Jenna Hastings has been working her way up the ranks as a teen, taking wins on youth podiums. Today as her first pro Crankworx win was officially announced, she sat in the hot seat in tears, before being drawn into the crowd of family and other female competitors to be congratulated.

“It’s unreal,” said the 17-year-old. “I had a bit of a mistake at the top…slipped a pedal, clipped my ankle. Just tried to hold it together the rest of the way and it went pretty smoothly.”

Hastings crossed the line in 3:15.842, over six seconds ahead of Shania Rawson (who took second) and Casey Brown (who took third).

In addition to podiums, champagne and giant cheques, today’s results add points to the overall King and Queen of Crankworx standings.

Bas van Steenbergen, the current men’s leader, adds to his points lead with his third place finish in Speed & Style, while Vaea Verbeeck earns a solid amount with a second in Speed & Style and a fifth place in the DH. Both have commanding leads, with two days of competition left in the season.

Up next, another double-header day with the Rockshox Rotorua Pump Track Challenge presented by Torpedo7 in the morning, followed by the Specialized Dual Slalom Rotorua in the evening.