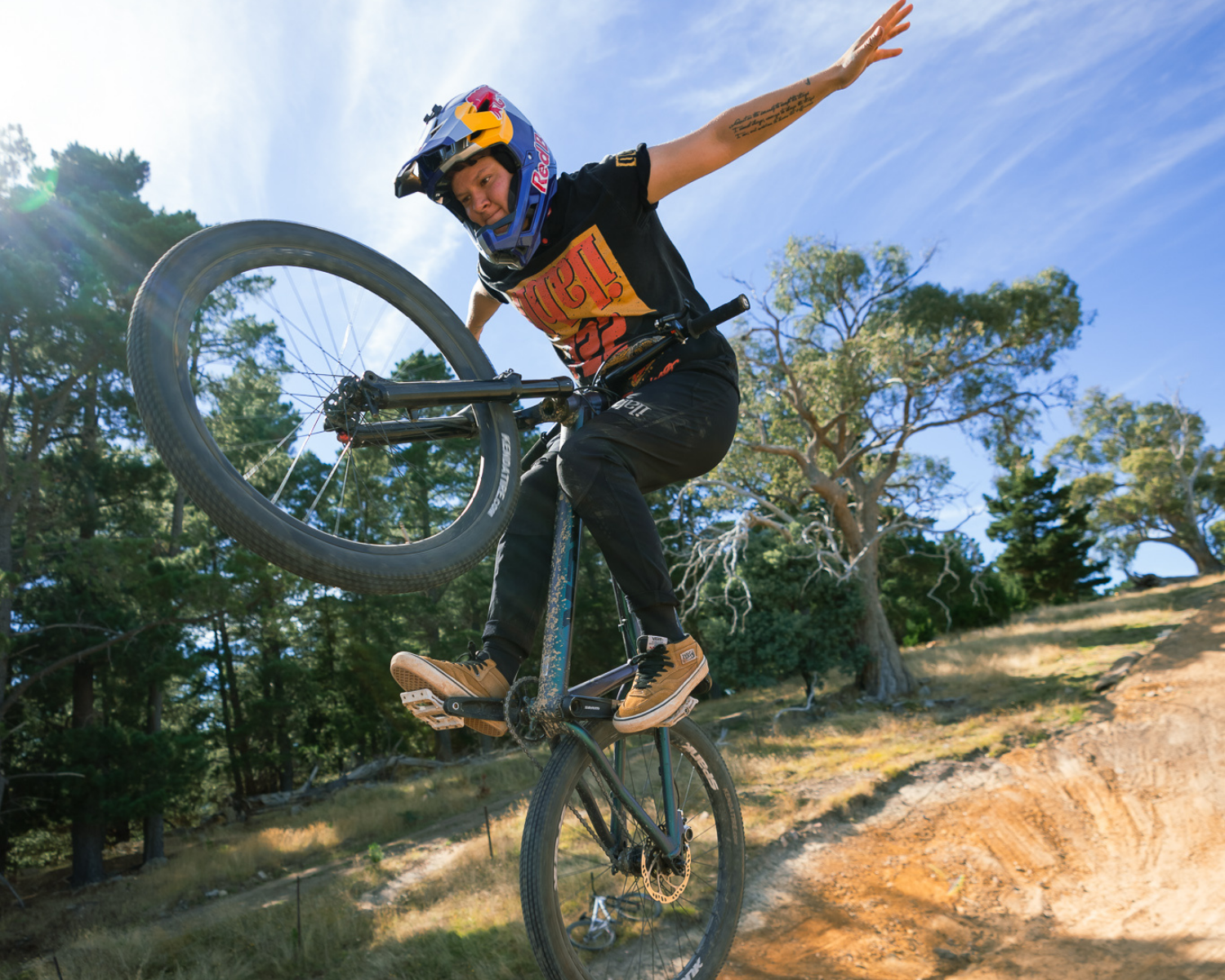 Getting ready for her fifth season competing in Crankworx events, Harriet Burbidge-Smith is no stranger to the mountain biking community. Nor is she new to pushing boundaries and breaking barriers for Women in freeride.

Spending a week in the heart of the desert last summer attending Red Bull Formation, a first-of-its-kind female freeride progression session, Burbidge-Smith set the tone for her 2021 Crankworx World Tour season. After competing in 23 events across the World Tour and first ever New Zealand Summer Series, the Red Bull athlete podiumed a total of six times (with three first-place finishes!) and finished third overall in the race for the coveted Queen of Crankworx title.

For Harriet though, this was only the beginning.

Energized by the progression made across the Women in freeride space in 2021, Harriet entered 2022 determined to continue building upon that momentum and introduce more opportunities for female athletes. And so, Trek Momentum was born. Having hosted her first ever Women’s Progression Camp only a few short weeks ago, we asked for a walk through of the experience.

“I ran the first ever Women’s Progression Camp in Australia, Trek Momentum! I was so stoked with how the week went. I was in awe of how the girls approached the week, with many never having hit ramps, airbags, or jumps/drops of that size before. Australia really hasn’t had a scene for Freeride or Slopestyle progression, especially on the Women’s side! So that was a big motivator for me when I came up with the camp and proposed it to Trek.”

Touching on the few opportunities available for Women to progress across the Freeride scene up until this point, we asked Harriet her thoughts on the Freeride Mountain Bike Association’s recent addition of a Women’s Category to the 2022 FMB World Tour. In considering how it will support the future of Women in freeride, Burbidge-Smith replied excitedly: “I am pumped!” Further adding that “giving young women a platform that they can showcase [their skills] or set their sights on is how we move forward.”

In and amongst advocating for future generations of female riders and growth within the sport of mountain biking, the ilabb rider also has the upcoming 2022 Crankworx World Tour on her mind. In trying to strike a balance between it all, her motto is simply “nonstop riding and fun!” Never without a goal and focus though, she shared how she is getting ready for a big season ahead: “I’ve spent a bit more time on the DH and trail bike, as I want to up my gravity event results, but at the same time I am just enjoying time on the bike with my mates.”

Reflecting on her breakout performance during last year’s Crankworx Innsbruck, with three top five finishes, Harriet didn’t falter from her enthusiastic, yet very chill, attitude towards her competitive results. “I enter all of the events because I genuinely love competing in them and if I don’t, I get massive fomo,” she laughed. On what we might expect from her during Crankworx Innsbruck 2022, she didn’t give away too much, but she’ll be there and that in itself is saying enough.

As for her overall goals across the 2022 Crankworx World Tour?

“Crankworx and Freeride events are a focus for sure! I’ve also got some film projects and events in the works! A big goal would be expanding my tricks for speed and style and getting my first gravity event podium for sure!”

With the Queen of Crankworx title back up for grabs, we asked if we might be talking to future royalty. Her take? “I am just here for a good time, and if that leads to an overall, sick!”

The 2022 Crankworx World Tour season is already shaping up to be one filled with excitement, progression, and dare we say… a bit of return to normalcy? We asked Harriet if she could let us in on how the riding community is feeling about what’s to come. Two words: “more stoke!”

Summing up how we’re all feeling about the season ahead she shared: “Everyone is so keen to get back to travelling and riding together. I know this side of the world (Australian and New Zealand) are all just frothing for Whistler! So just a whole lot of good times.”

We feel you, Haz.