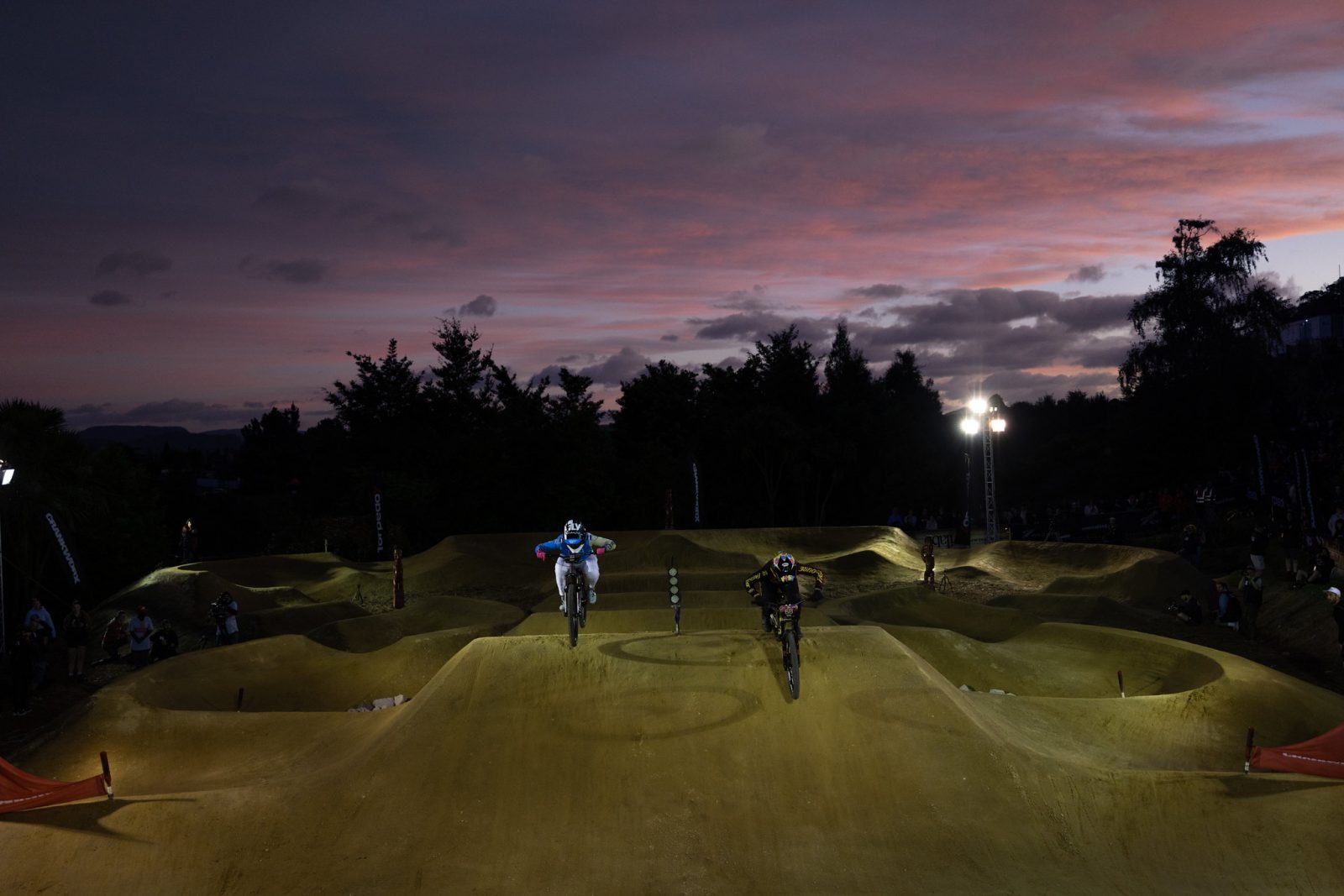 ROTORUA, NEW ZEALAND November 10, 2022 — Day seven of Crankworx Rotorua brought spectators an action-packed double header with Specialized Dual Slalom Rotorua in the afternoon followed by Crankworx Rotorua Pump Track Challenge presented by Torpedo7 once the skies started to put on an epic sunset for the riders and fans.

Starting the action off with the Specialized Dual Slalom Rotorua, the riders got to experience a completely different track from the dry conditions they rode in qualifiers only two days before. Qualifying in sixth place, Jackson Frew fought his way to the top step of the podium today, and it was no easy battle especially with the slippery state of those flat corners.

“It was really tricky,” Frew said of the dual slalom course. “My strategy was to throw everything at it and if it sticks, then sweet. There’s really no strategy, my riding style is very much to be committed and be willing to go down with the sinking ship if it decides that it wants to. I’m just pumped to be here, pumped to keep it up and pumped to put a gold medal on the board.”

Putting on a masterclass for keeping her composure was the British rider, Martha Gill who will be taking home her first Crankworx gold medal today at the Specialized Dual Slalom Rotorua.

“I started to struggle on the flat corners on the black lane a little bit,” Gill recounted of her race runs on the track. “Luckily, I felt like I had the right side pretty dialed in, so I had a good advantage for most of my runs from the right side and just tried to keep it pretty cool. It was easy to push it too hard and then crash. I saw quite a lot of crashes and quite a lot of people missing gates so just really focusing on keeping it calm and not making any mistakes; well not too many at least.”

It was tight racing for Gill against her mate, Harriet ‘Haz’ Burbidge-Smith, who will be taking home the silver medal for Dual Slalom today at Crankworx Rotorua. The Red Bull rider gave it her all, digging herself out of a few disadvantages over the course of the day, but Gill took the victory in the gold medal match-up by 0.57 seconds. Fellow Red Bull rider, Tomas Slavik also put on quite a show redeeming himself in many of his second runs of the matchups of the day, advancing to the finals and taking home the silver medal in the men’s pro category.

The action continued over at the Pump Track with the Crankworx Rotorua Pump Track Challenge presented by Torpedo7. This course build is arguably the tightest, most technical of the pump tracks on the Crankworx World Tour pushing the riders to pump with absolute precision tonight, using every newton of momentum for the advantage against their opponents. The Rotorua skies put on a spectacular sunset in time for the quarter finals, and the athletes followed suit, putting on quite a show for the spectators.

“The fans here in Rotorua are so good, this is what we live for,” Caroline Buchanan said, basking in her gold-medal glory. “I’m a performer and I love to shine with you guys, I love the high fives, so give it up to Rotorua.”

Caroline Buchanan grabs the gold medal in Pump Track, giving herself 100 points toward the Queen of Crankworx standings, and now in second place behind Jordy Scott who scored an additional 80 points this evening with her silver medal at the pump track.

“Pump Track is something I love,” Buchanan continued. “But all points toward the Queen of Crankworx are valuable and all us girls are putting on a show and it’s incredible. We’ve been talking about the Queen of Crankworx, and anyone deserves it. I’m just stoked to be in the mix and take the win here tonight.”

The men’s gold medal match-up saw two friends at the start gate, Niels Bensink who qualified first in Pump Track, up against the reigning King of Crankworx, Bas van Steenbergen, who also took home the bronze medal for dual slalom earlier today. Bensink put down textbook riding all night, firing on all cylinders. While Bas van Steenbergen came back with a flawless second run of the gold medal matchup, Bensink had it from the start, crossing the finish line 0.38 seconds ahead of van Steenbergen in the first race.

“At first I was a bit skeptical, I wasn’t sure if there would be enough speed but then how it was running in finals was insane,” Bensink commented on his race runs on the pump track. “So fast and it’s holding up, so I am happy. To be honest, I really needed this win. Whistler and Cairns didn’t feel that great for me so I needed it for myself. I was hungry for this one to finish off the season good and give myself a good birthday present.”

The action from today really made an impact on the overall King and Queen of Crankworx standings. Bas van Steenbergen didn’t win the battles on the dual slalom or pump track today, but he’s leading the war right now. van Steenbergen is now in a huge lead with 143 points ahead of Jackson Frew and 193 points ahead of Tomas Lemoine. The Queen of Crankworx standings is much tighter with only 2 points between Jordy Scott who is first place in standings followed by Caroline Buchanan.

On deck for tomorrow, Friday, November 11th, some of the best downhill riders in the world will take on the RockShox Rotorua Downhill course at Skyline Bike Park Rotorua. With some rain forecasted for tomorrow, this is sure to put their skills to the test. Catch all the action from home on Red Bull TV.