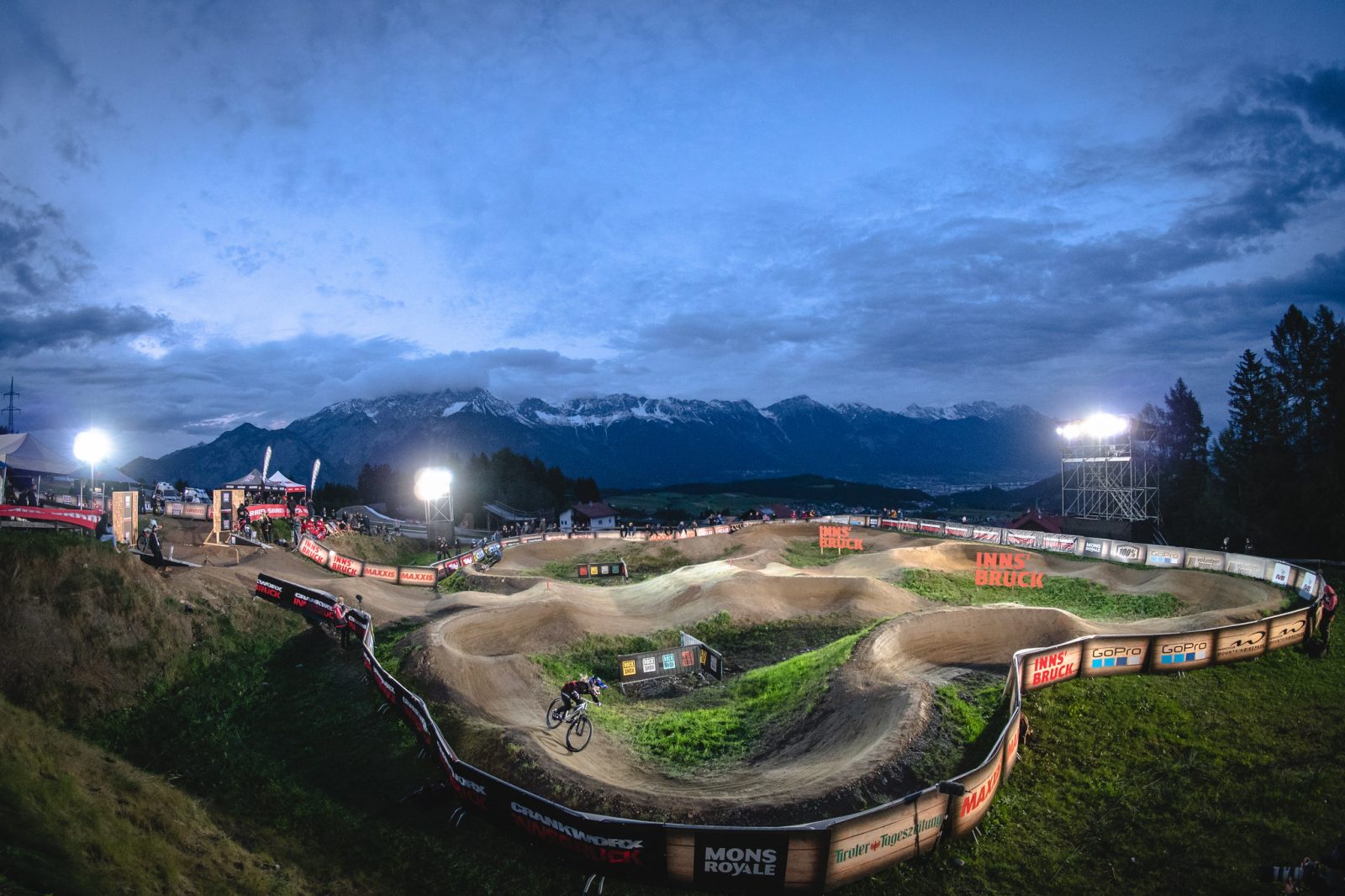 INNSBRUCK, AUSTRIA, October 1, 2020 — The French have swept the first day of Crankworx Innsbruck competition. Adrien Loron and Morgane Charre kicked off the day with wins in the Dual Slalom, and the momentum continued in the RockShox Innsbruck Pump Track Challenge. As the sun set on Bikepark Innsbruck, Mathilde Bernard, who finished one behind Charre earlier, stepped up to the top step alongside Loron.

Loron won in a tight battle that’s played out many times before in Crankworx locations all over the world. In fact, Chaney Guennet has taken first on the Innsbruck Pump Track twice before (2017 and 2018) while Loron had won once (2019) before today.

“He’s one of my biggest opponents,” said Loron, whose Innsbruck Pump Track wins now equal Guennet’s. “We’re used to racing against each other. It’s the first time we are three Frenchies on the podium, because Tomas is a really, really good guy too. It’s the best. We are…all three we are friends and we had so much fun tonight. It’s the cherry on the cake to take the win.”

“He rode better than me,” said Guennet. “(Riding against him) it’s like riding every race with the best guy in Pump Track, so second place, I’ll take it.”

Loron was behind Guennet by 0.27 seconds after their first matchup, but charged in their second, crossing the line 0.41 seconds ahead of Guennet, enough for the win. In the battle for third, Lemoine swept both rounds against the Netherlands’ Niels Bensink.

“That was a pretty long day with a lot of practice – Slopestyle, Pump Track, Speed & Style,” said Tomas Lemoine, who rounded out the trio of Frenchmen on the podium. “I was pretty happy with my Slopestyle practice, so I was kind of pumped for Pump Track, and I managed to make it to third place. I’m happy with that. Loron beat me in semi-finals and he was super fast today. That’s the last guy I saw before we came here, and we went surfing together, so I’m pretty happy with this.”

On the women’s side, some talented locals fought hard to take on a mix of top international riders. Bernard and Germany’s Kathi Kuypers battled it out for first, with the French rider taking both rounds.

“I’m super happy,” said Bernard of the gold medal she’ll add to the one she earned in the Les Gets Pump Track in 2018. The young rider’s big day is just the beginning – she’s set to take on the first Austrian edition of women’s Speed & Style tomorrow, as well as the DH Sunday.

“It was incredible,” said Kuypers of her podium. “I’m super happy that I made it to  second place. My first Crankworx medal. Mathilde is a BMX Racer and I am super stoked she won Gold, she is so fast on her bike.”

“This one is pretty technical,” added Loron. “It’s pretty tight, it’s not too fast. You cannot pump like hell and go fast. You really need to be careful in the corners. It’s a bit slippery and the light is always playing with your mind when it’s getting dark. So it’s not an easy one. And also of course physical because I had two events the same day.

Next up, another epic double-header awaits. Friday will see some of the world’s fastest and most stylish riders take flight, starting with the Crankworx Innsbruck Slopestyle and ending with the CLIF Speed & Style presented by GoPro, both live on Red Bull TV: redbull.com/ca-en/events/crankworx-austria