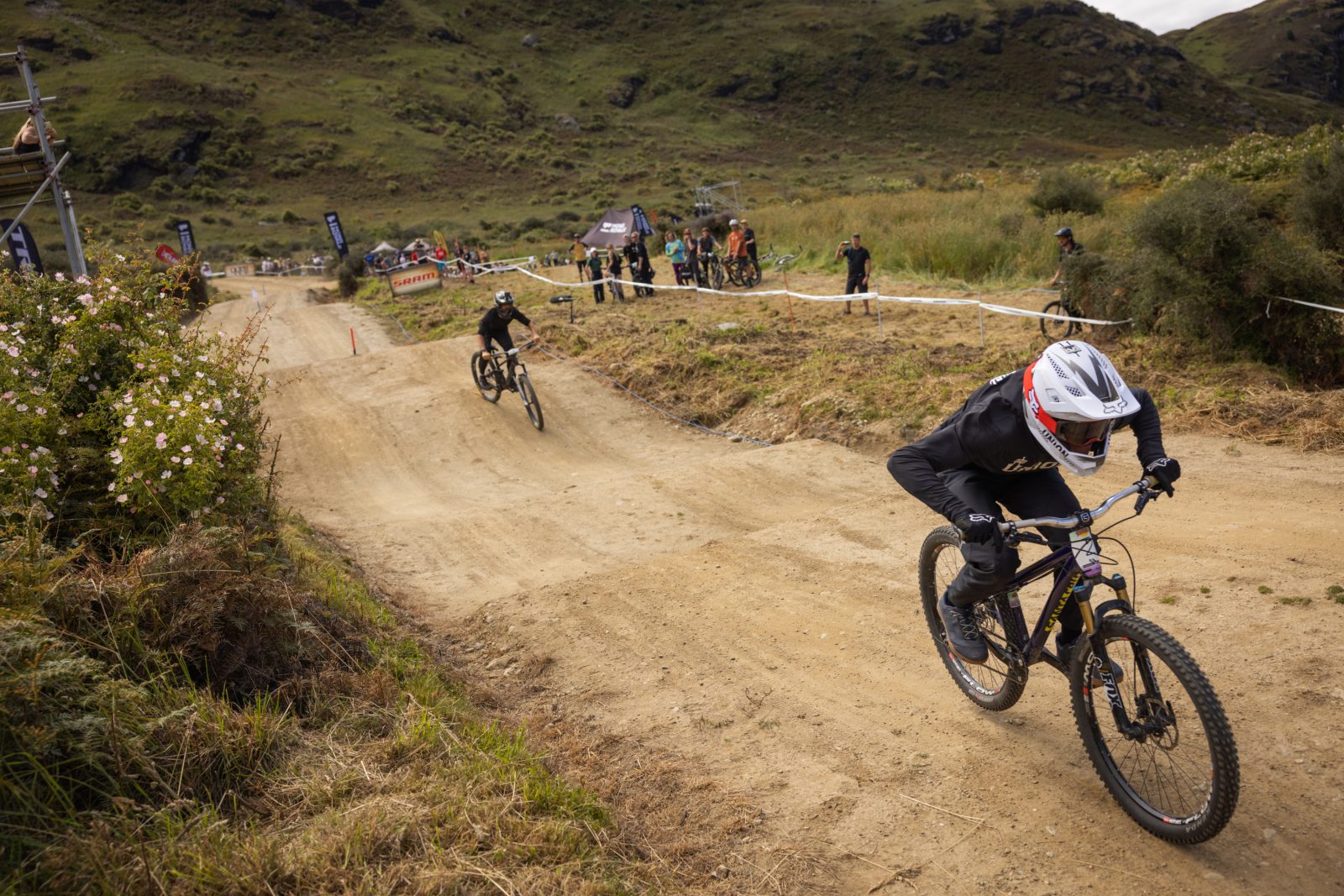 Wānaka, New Zealand, December 17, 2021 – 27 events. Eight destinations. Three continents. Two hemispheres. It has been a big season for Crankworx competitors, with three World Tour stops, and one heck of a season-ender roadie. December has brought one last blast of competition to riders, who’ve taken their skills to the road across the South Island of New Zealand for the Summer Series.

The Wānaka Dual Slalom brought competitors together at Bike Glendhu to bring the season to a close in style.

The new Dual Slalom track was a 436 meter pedal-fest, pushing competitors to lay it all out on the dirt for one final push toward the season’s finish line.

“It felt amazing eh,” said Tuhoto-Ariki Pene, who earned his second Crankworx win in the Dual Slalom. “I was just like ‘it’s the last race so I’m just going to give everything I’ve got’ you know. It’s the last race of the season and it’s been a long season so yeah, I just wanted to give it everything. Lucky enough to take the win. I was like ‘yooo.’”

Pene had qualified second, but showed he was riding to win when he clocked the fastest lap of the day in his semi-final matchup against Sam Blenkinsop.

“We…dropped in and we were both yelling at each other on the first straight, having a good laugh while we were racing,” he said of the head-to-head matchup with fellow Kiwi downhiller Blenki. “We were both just pushing as hard as we could. It was good fun. Loved it.”

“I’m not here to muck around,” added Blenki of the vibe of racing for fun with mates, while also racing to win. “I like to do my best, and that’s all I was doing. Obviously I’m pretty stoked to get third today. I felt like I was pretty close to Tuhoto in the semis. We were yelling at each other down the first straight. It was so funny. I was like ‘Oi, I’ve got you, boy.’ I had him on the first straight so I was real stoked with that, but then I fully forgot about the turns and went inside the turns. I was just stoked to beat him on the first straight, so that was my win.”

Pene would then move on to the finals, facing Bas van Steenbergen, who qualified first.

“Yeah nah, I was happy with it,” added the Rotorua rider, who beat the King of Crankworx by less than half a second after two runs. “Bas is always fast and he’s a strong rider. I just had that little bit left in the tank and gave it shit. Happy as.”

On the women’s side, the season ended for the first place finisher as it began: with a win in Crankworx Dual Slalom.

“It’s pretty cool,” said Harriet Burbidge-Smith, who kicked off her 2021 Crankworx season with a win in Dual Slalom in Innsbruck, and ended it in Wānaka with the same. “I thought that this morning, that it would be pretty cool to end it the same way. It’s pretty much how this year took off for me, and how it ended, so it’s cool.”

The Australian was riding strong on the track all weekend, qualifying first and riding consistently through finals. In the end, she bested Caroline Buchanan in the finals by 1.387 after two rounds.

“I think I was super comfy on the track, I think I only did like one run this morning in practice, and that was it,” she said of her confidence all weekend. “I wanted to save my energy. And I knew the whole time that I had it dialed, and the only way I wasn’t going to win was if I made a mistake. In the first few runs I was going a little too hard and made a few small mistakes, and then Mikey [Haderer] talked to me and said ‘Chill out.’ So for the final with Caroline I actually chilled out more, and it went a bit smoother, so that was cool.”

After a long season of racing, Burbidge-Smith says today’s win is the cherry on top of a long and successful 2021.

Earning the most points through their consistent top finishes across the series: Sam Blenkinsop and Jenna Hastings.

“We’ve done a lot of races and it’s been epic,” said Blenkinsop, who stepped up to the top step with his daughter on his shoulders. “It feels like Alexandra was like months ago, but it was only two weeks ago, so yeah, it’s been cool. I love this stuff, man. Head-to-head racing, Downhill, Pump Track, Super D – it’s been epic. I’ve loved it. Today, finishing in this place, I mean look where we are. It’s amazing. We’re looking over Lake Wanaka in Glendhu here. We’re lucky. We’re lucky people to be able to do this stuff.”

For Hastings, the win caps up what’s been a breakout season, with top results for the 17-year-old at both Crankworx Rotorua and throughout the Summer Series.

Next up: rest, riding for funsies, and looking ahead to the good times on the horizon for 2022.

Until then…peace, from New Zealand.