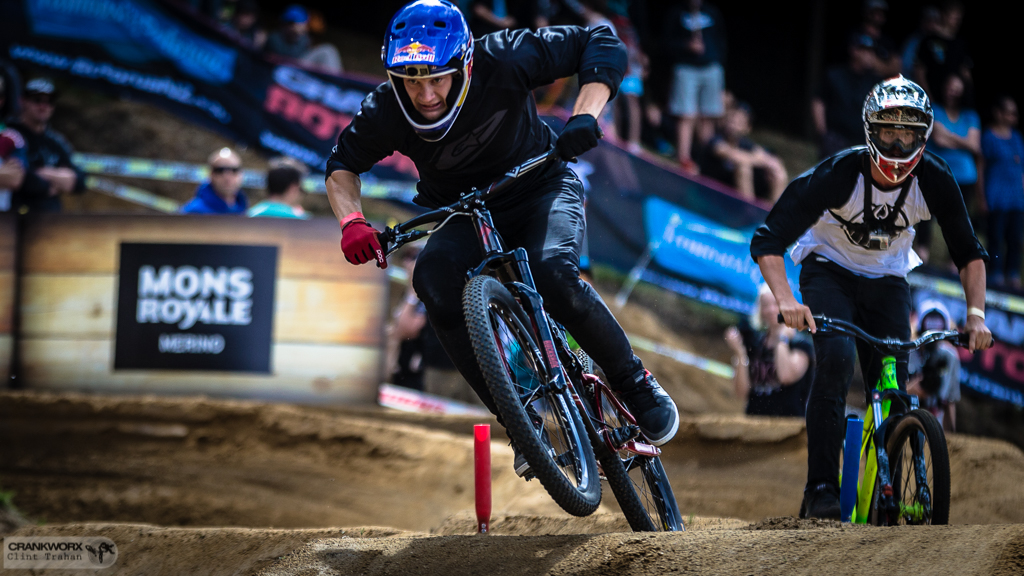 ROTORUA, NZ, March 26, 2015 –The giant Swede, Martin Soderstrom, has walked away with a huge personal victory, returning from back-to-back injuries for the win in the Mons Royale Dual Speed and Style at Crankworx Rotorua.

“I had some really bad luck with injuries, so it’s such a good feeling to be back on top and riding with all my friends again,” said Soderstrom, who beat out Adrien Loron (FRA) in a neck-and-neck final round.

Loron was targeting the speed aspect of the duelling discipline throughout, choosing to consistently try and pin it across the line first, over pulling the best tricks. In the end, Soderstrom’s flair won the day. Standing in the finish coral, he officially confirmed he is targeting the new King of the Crankworx World Tour title, a season-long race to gather the most points at Crankworx events.

Announcer Tristan Merrick chalked the results up to Soderstrom’s demeanour.

“He has got such great tricks, but I would say he’s back and he’s healthy and he’s confident,” he said, when asked what he figured gave him the edge.

Dual Speed and Style pits two riders against one another in a gravity-fed race down a course designed for pulling tricks, challenging the riders to balance the need for speed against their best possible tricks.

Loron, meanwhile, was still happy with his outcome having taken out Ryan ‘R-Dog’ Howard in the quarter finals.

“It was pretty cool for me to win against Ryan Howard because he’s a pretty good rider and I lost last year against him. So, I’m happy to get on the podium today,” he said.

Soderstrom bested a field of 29 riders for his first major win in close to two years.

Video highlights of all the action in Rotorua will be released on www.crankworx.com

Afternoon rain showers forced a postponement of the Rotorua Pump Track Challenge presented by RockShox, although seeding runs were completed and put the four-time Queen of the Pump Track, Jill Kintner, on top.

Some 11 women and 30 men participated in the seeding runs, racing the track solo before Friday’s mano-a-mano-style competition.

The Women’s Pump Track was considered one of thebest lineups Crankworx has ever seen for women Kintner (USA) looking to recapture her place atop the podium after losing it to Caroline Buchanan. She faces Sarah Walker (NZL), 2012 Olympic silver medalist in BMX, Anneke Beerten (NED), BMX and 4Cross World Champion, and world-class downhill riders like Tracey Hannah (AUS), Emilie Siegenthaler (SUI) and Casey Brown (CAN).

UP NEXT: The Crankworx Rotorua Downhill presented by iXS sees brother and sister Tracey and Mick Hannah race the Number 1 plates, as determined by Wednesday evening’s plate draw. They are up against another brother and sister pairing, Gee and Rachel Atherton.

For more information about all other Crankworx Rotorua events, visit www.crankworx.com/rotorua

Cutline: At six-foot, five, Martin Soderstrom dominates the field on size and in the Mons Royale Dual Speed and Style he proved, once again, he also holds court in the talent department.