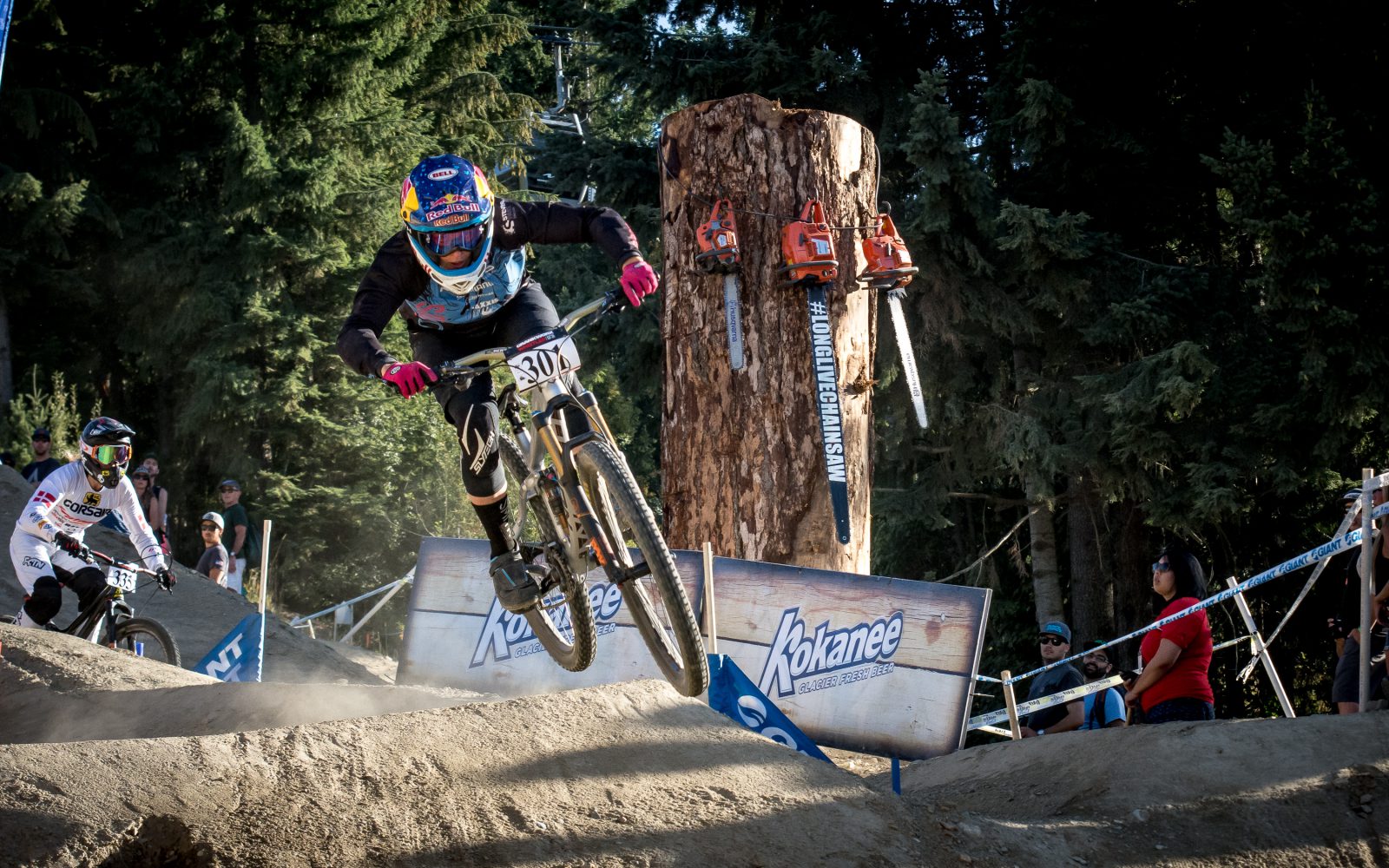 FOR IMMEDIATE RELEASE
Friday, August 19, WHISTLER, BC —American Jill Kintner can finally rest easy knowing her GIANT Dual Slalom win at Crankworx has sealed her victory, she will officially be crowned Queen of Crankworx.

Dual Slalom is a gut-busting, and in this case dust-kicker, of a race, which sees riders pitted head-to-head down the tight turns to the finish line, and it is one of the hardest disciplines to master in the skills omnium that is the King or Queen of Crankworx.

The King and Queen of Crankworx are the season-long competitions to collect as many points as possible, in as many disciplines, in the three Crankworx World Tour stops and Kintner has dominated all season, having set her sights squarely on the Crankworx competitions, rather than World Cup racing.

“I train full-on like I’m racing World Cup downhill, pretty much, but there’s like a little bit more of a fitness aspect because you have to go like back to back to back days. So twice a day, every day, or six days a week I should say,” she said.

Saturday’s race actually saw Kintner oust the inaugural Queen of the Crankworx World Tour, Anneke Beerten, in what’s rumored to be her best discipline—the Dual Slalom. But closing in on 30 Crankworx wins, she is also clearly good at every discipline she races.

“Slalom is my favourite because I worked the hardest to get good at it. Downhill is the best because it means the most because it’s just challenging, and pump track is just fun,” she said “They all have their special place and I try to be as good as I can be at all of them.”

The men’s GIANT Dual Slalom gold medalist will have to wait to see if he too will win the overall title. His main challenger, Sam Blenkinsop, is racing the Canadian Open DH presented by iXS tomorrow, and could oust him if he comes top-five. Slavik is not in the downhill race and decided to leave nothing in tank during this final race.

“We went really over the limit, but at the same time, I was having so much fun on the bike because the course was amazing and the crowd was amazing. I was trying to be as fast as possible in the race, but that race was just sick. I just have no words for it. After the qualification I knew already that anything could happen. It’s going to be about those tiny mistakes and I haven’t done any, so I’m really stoked – in the way of my race and in the way of my performance,” said Slavik.

B.C. racer Bas Van Steenbergen, meanwhile, pulled in for a third-place finish, having the season of his life.

“It’s funny because once you get a win, then you’re kind of disappointed with everything else, but if you would have told me I would be third in Slalom at the start of the week, I would have been pretty stoked,” he said “I tend to do alright at this event in particular, so I was definitely kind of focused toward this one, which kind of took the pressure off the other races and I guess it worked.”

On Wednesday he brought in his first major Crankworx win in the Fox Air DH and he started the week with a CLIF Bar Dual Speed & Style fourth, losing third to his brother, Tom, who threw down the first double backflip the event has ever seen to earn the first perfect 100 score.

The GIANT Dual Slalom was Friday’s live broadcast event, shown on Crankworx.com and Pinkbike.com. Seven events in the 10-day festival are broadcast live, and later repackaged into extreme sports shows.

Events continue through this Sunday, August 21, culminating in the marquee event this Sunday, Red Bull Joyride. This is a Slopestyle competition, which sees the athletes perform an aerial show, jumping off a string of wooden features before a crowd of 30,000-plus fans.

Results for the GIANT Dual Slalom:

Complete results for all events can be found on Crankworx.com.

Photo captions:
1. Jill Kintner pulls it in for the Queen of Crankworx in the GIANT Dual Slalom, winning the overall title for the Crankworx World Tour before the weekend’s big event, the Canadian Open DH presented by iXS.