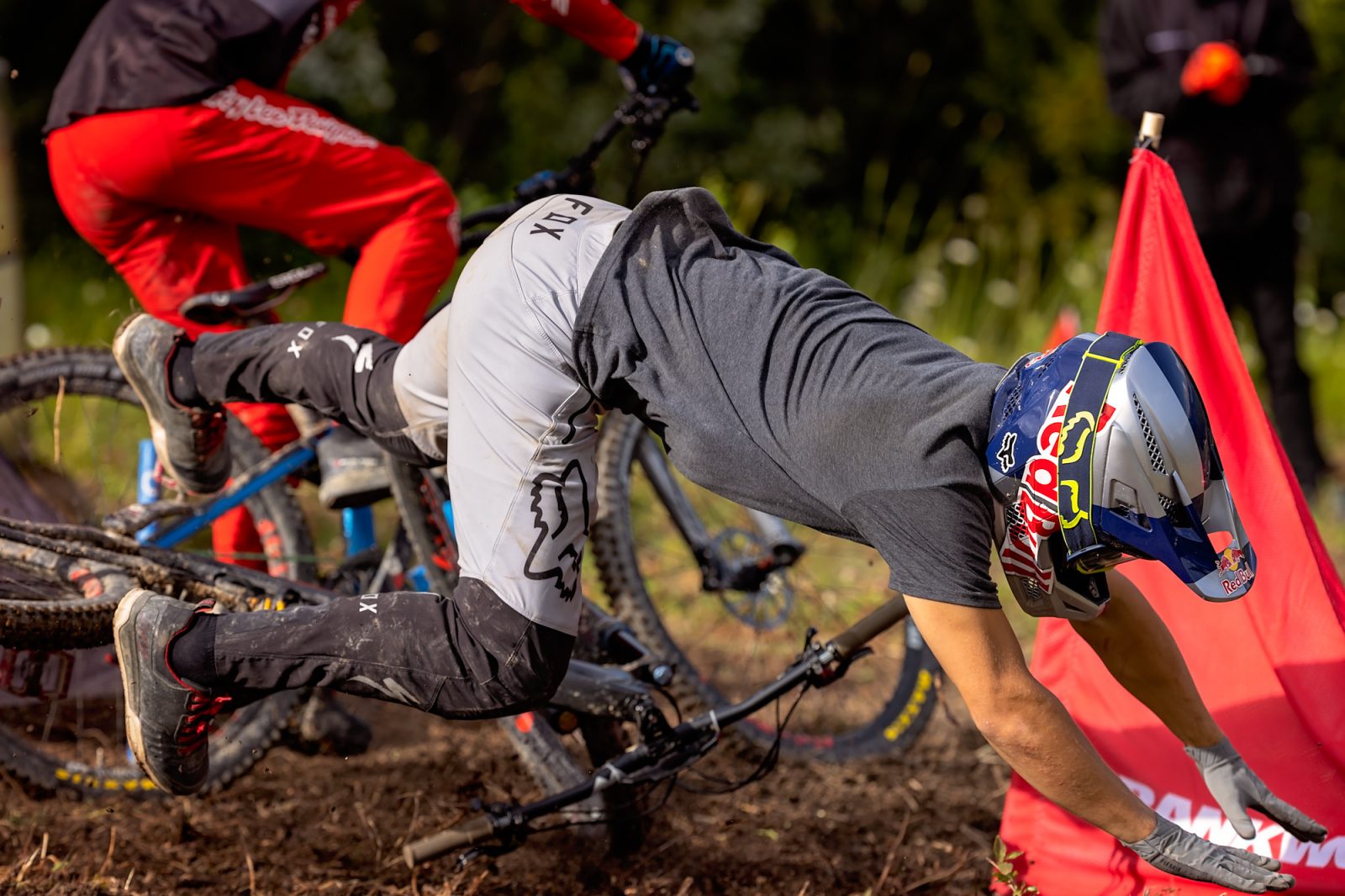 Rain pushes riders to dig deep, with “bin it or win it” mentality leading to some “hectic moments”

GOLDEN, BC, August 6, 2020 — After a week and a half of dusty tracks and hot days on the CLIF Crankworx Summer Series, racers were thrown a curve ball by Mother Nature. Midday, the skies opened up over the craggy peaks of Golden, B.C. and dust turned to sludge. The ensuing rain delay on qualifications and finals left racers playing the waiting game and battling their inner demons, instead of their opponents.

“It was pretty mixed emotions really with the rain at the beginning and then a big course hold,” said Lucas Cruz. Eventually, the rain stopped, the course dried, and it was back to it. “Racing’s racing. Always fun and I had a great day.”

The Pemberton downhiller took his first win of the Summer Series, after finishing third in the SilverStar Dual Slalom last week. And while Cruz was riding strong as the field narrowed over the course of the day, he had his work cut out for him.

To break through to the finals, he faced off against Bas van Steenbergen, who was ahead after the first of their two matchups. Van Steenbergen, for his part, had already knocked out Kirk McDowall, who’d qualified second.

“He’s definitely a top contender for Slalom all the time, so I just kind of tried to keep that aside and stay on my own line, and race my own race,” said Cruz of his mindset going to battle against van Steenbergen. “And it worked out.” Van Steenbergen was ahead as the two faced off the second time, but went down. Cruz charged ahead and into the finals where he would line up against Mark Wallace.

Wallace went into finals on a wave of momentum, having qualified first overall. But in his fight to get to the gold medal matchup, he had a “hectic moment” as he faced off against Finn Iles.

“In the middle gates there, on the grass turns, we were both pretty side-by-side. I tucked my front wheel in a right-hander, and then it started to hook and I thought ‘I’m going to overturn straight into Finn here.’ So I kind of looked over to see where he was at, and then just watched him tuck the front and crash. And then I somehow managed to save mine and cruise down. Kind of a hectic way to the finals but I’ll take it.”

Asked whether the distinguished downhiller expected to take a podium in Slalom coming into the series?

“Absolutely not, but I was pretty excited to do Slalom. I’ve never really raced it much… I just had a blast today.”

The race for the women’s podium had its own fair share of edge-of-your-seat moments.

Andréane Lanthier Nadeau, who won Tuesday’s Enduro, lined up in the gates next to Vaea Verbeeck, who’s distinguished herself in recent years as a top Slalom contender with a mean snap out of the gate.

Their first matchup was tight, with both women riding on the edge. Sending it over the final jump, ALN knocked her back wheel on the landing, but managed to stay upright.

“Bin it or win it,” she said, laughing, from the finish corral before heading back up for their second matchup.

“The last one, I knew I had a slightly faster lane, and we were super close on the first run, so it was really whoever was going to make it first through the finish line,” said Verbeeck. “I spun through the second last flat corner gate where I was trying to get on the gas to get that margin before the finish line, and I believe she did too, but I didn’t know. You’ve just got to push as hard as you can until you’re done, and that’s when you know.”

“It was another roller coaster,” added Verbeeck after the mud settled and the winners announced. “Slalom is one of the disciplines that I’m always stoked on. It’s the best kind of riding. I’m so happy Kicking Horse put a track together. I think everybody had a really good time.”

In the battles for third, Casey Brown won out over Miranda Miller, while Iles charged hard in his second matchup against van Steenbergen, enough to claim the final podium spot.

Next up, racing action in Kicking Horse will wrap up with a double DH day. The Maxxis Kicking Horse DH will be broadcast live, accompanied by the unveiling of the results from yesterday’s Mt7 Psychosis race along with the highlights from the storied race.

About the CLIF Crankworx Summer Series
The CLIF Crankworx Summer Series (CCSS) brings together some of the best of British Columbia’s mountain bike athletes and riding destinations in a made-for-T.V., multi-stop series. 25 invited B.C.-based riders, including some of the best pros and up-and-comers from Crankworx, the UCI DH World Cup and the Enduro World Series, will compete across multiple disciplines for the overall CLIF Crankworx Summer Series title. Through live race coverage, event highlights, weekly recaps, and more, fans will get to follow their favourite riders as they compete in Downhill, Dual Slalom, Enduro, and Air DH, and come along for the ride as they experience some of the best riding B.C. has to offer. Get stoked. Be safe. Watch #CrankworxFromHome. For additional information, visit crankworx.com.About the Crankworx World Tour
Crankworx is the ultimate experience in mountain biking. Born in Whistler, B.C. in 2004, Crankworx has evolved into a multi-stop international festival series. The Crankworx World Tour brings together the best mountain bike athletes to compete in elite-level competitions in a variety of disciplines. Crankworx World Tour festivals also host races for amateurs, CWNEXT categories for next gen athletes, Kidsworx contests for young riders, participatory events and celebrations of mountain bike culture, all while showcasing amazing destinations. For additional information, visit Crankworx.com.