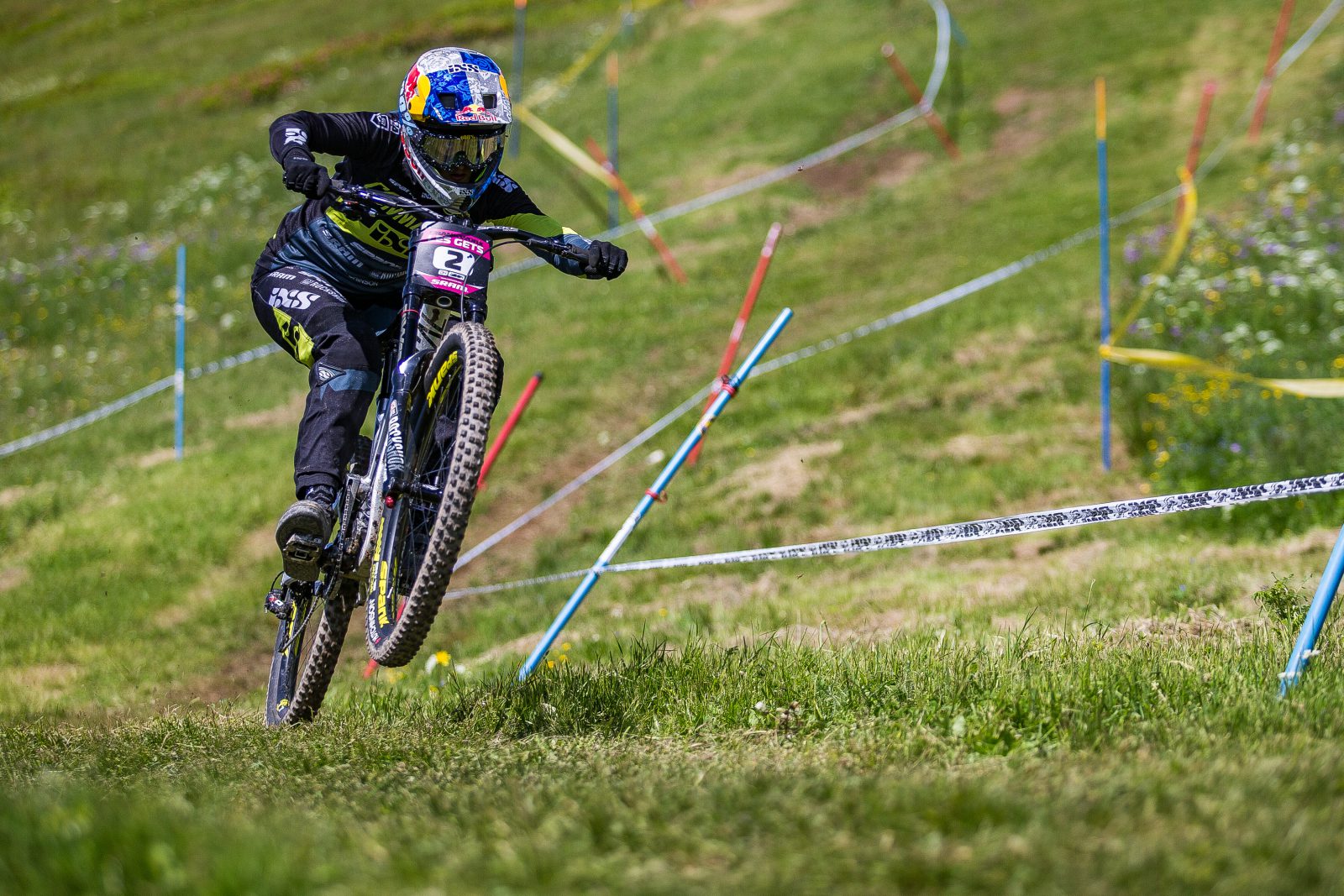 FOR IMMEDIATE RELEASE Les Gets, FRANCE; Saturday, June 17 —Hot, loose conditions combined with the wide turns, steep woods and a crazy grass section unseen on any other modern track gave the Crankworx Les Gets Downhill presented by iXS a race worthy of its legendary course status.

With a stacked field of both men and women on deck, Myriam “Ponpon” Nicole (FRA) sailed through the finish line for her first Crankworx win in two years, over a woman well-accustomed to the hot, dry conditions, Tracey Hannah (AUS).

But the story of the night was last year’s Canadian Open Downhill presented by iXS champion Troy Brosnan (AUS), whose slick maneuvers through the technical, steep, rooty woods rip left everyone, including top pros, like Greg Minnaar, and his 70 podium finishes, in the dust.

“It was really fast at the top, and in the middle section, in the woods, you were kind of picking your lines and holding speed—that’s where I really excelled. Then down at the bottom, it was back to wide open track. So you’re just flat out—it’s a really hard one,” said Brosnan.

The course has hosted World Cups, but earned infamy as the 2004 World Championship track on which Steve Peat handed rival Fabien Barel a big win after falling within sight of the finish line. Both Barel and Peat were on course Saturday, Peat competing from retirement on his 43rd birthday.

“Having all these legends here, ones that have won on this track back in the day, World Champs and all that, and to have riders from the World Cups that are really fast, made me definitely pretty nervous,” Brosnan said.

The course conditions did work in his favour, proving quite similar to the hot, dry heat that brought him his last Crankworx win in Whistler. It was a little harder for young gun Loris Vergier (FRA), who came in off a first, second, third streak on the World Cup circuit, in Lourdes, Fort William, and Leogang, respectively.

“I think the grass part was sketchy to race. It’s just old school and we’re not used to it. But the middle part is really good and we need that kind of track on the World Cup,” he said.

Battling her weakness, the corners, Nicole had her sketchy moments herself, coming unclipped going into the road gap, and only narrowly managed to secure her footing before hitting the road gap.

“It’s such a good track and everything was perfect,” she said, noting she was here last year, though she couldn’t race, due to injury. She won this event in 2015, when it was held at Crankworx Les 2 Alpes.

Nicole was over five seconds up on third place finisher Emilie Siegenthaler (SUI), who said she took on the course a bit too hard at the top, not anticipating the amount it had dried out since practice earlier in the morning.

Siegenthaler took second in the mudfest that was this race in 2016.

“It was way easier this time. Our times are two minutes faster, so it was rough on your arms and stuff, but last year was almost impossible to stay on,” she said.

“This year it got really rough towards the end because it didn’t rain and lots of people are practicing on it. So there’s lots of holes and brake bumps. But it’s all about braking holes and bumps in downhills… It was very good.”

Phots (above2, inset): Troy Brosnan (AUS) sails around the corner where George Brannigan (NZL) tored down the tape and nearly came off course.