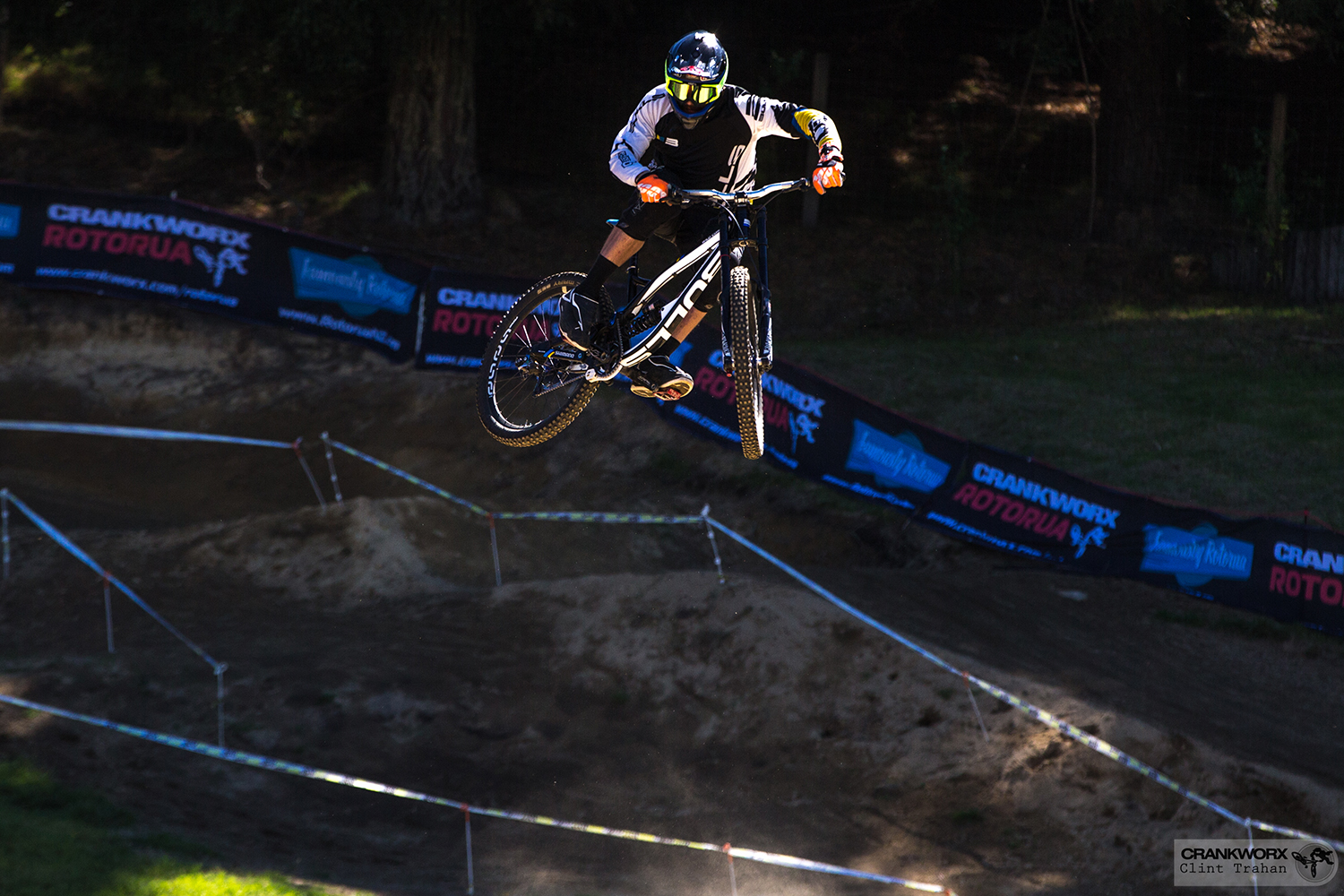 Launching the three-stop tour in the volcanic region of New Zealand known for its boiling mud and “dirt gold,” the inaugural Crankworx Rotorua will blaze a new trail for Crankworx, stepping up competition with the first stage of the new Crankworx Series titles, laying the foundation for the King and Queen of the Crankworx World Tour and determining which Slopestyle rider has the first shot at securing the new Triple Crown of Slopestyle.

“The World Tour has really caught the riders’ attention. Whether it’s the race for the Triple Crown or the allure of the four new Crankworx Series competitions, or the new King and Queen titles, Crankworx Rotorua has certainly drawn an unprecedented level of talent,” says Darren Kinnaird, General Manager of the Crankworx World Tour.

Competition opens with the Official Oceania Whip-Off Championships on Wednesday, Mar. 25, where 15-year-old Whip-Off World Champion Finn Iles (CAN) will try to duplicate the stunning performance, which earned him the title in Whistler. A win on Kiwi soil means stealing the title in the adopted homeland of mountain bike photographer Sven Martin, who invented the sport; but pulling out the skill and steeze to reign supreme will not be easy against the likes of Brendan Fairclough (GBR), Eliot Jackson (USA), Brendan Kerr (GBR), and Tyler McCaul (USA), the man who won the first Whip in 2012.

“Last time, there was a lot of pressure because everyone was pushing for me to get in,” says Iles, who won the right to compete in 2014, though under age, via a social media campaign. “When I got there, it turned out it was just a lot of fun and the only pressure was just the pressure I put on myself. And this time, it’s almost like there’s even less pressure. It’s just have fun and see what I can do.”

On Thursday, Mar. 26, riders invited to compete in the Mons Royale Dual Speed & Style will ignite old rivalries and potentially create a few new ones as they try to balance the race for the finish line with the bonus marks available for difficult tricks. Both the Crankworx Les 2 Alpes winner, Cam Zink (USA), and the 2014 Whistler top spot, Kyle Strait (USA), will be back on the track. Meanwhile, New Zealanders will be watching their fellow Kiwis Kelly McGarry, Connor Macfarlane and Phil McLean go head-to-head for the win.

“The field is much deeper than anyone really knows. Martin (Martin Sӧderstrӧm) and I have been the most consistent in Speed and Style finishes, but with the format being so volatile, and the competition being so tough, there are a lot of people that are capable of winning that really haven’t had a chance to shine. Strait won Whistler, (Greg) Watts almost took me out in Les 2 Alpes, so they are obviously now on the radar; but people like Tyler McCaul, Cam McCaul, Thomas Lemoine, and others will remain tough to beat,” says Zink.

Equally stacked is the field for Friday’s Crankworx Rotorua Downhill presented by iXS for which race officials are holding a draw for the Number 1 plate. Ordinarily, determined by race standings, competition was too stiff this season for any one rider to stake a claim to the top seeding. The draw includes previous race winners from Les 2 Alpes and Whistler and former Kings and Queens of Crankworx Whistler: Gee Atherton (GBR), Steve Smith (CAN) and Mick Hannah (AUS), for the men, and Rachel Atherton (GBR), Jill Kintner (USA), Casey Brown (CAN) and Tracey Hannah (AUS) for the women.

On Saturday, Mar. 28 The Giant Toa Enduro kicks off the Enduro World Series season with all the top riders in contention. Last year’s champion, Jared Graves (AUS), faces some stiff competition with several riders returning from a season sidelined by injury, like 2013 EWS champion Jérôme Clementz (FRA). Also on the comeback climb, Fabien Barel (FRA) will be on the start line, after winning the last round of the 2014 EWS season in his first race since breaking his back. Fresh off a win at the Giant 2W Enduro in Rotorua last month, New Zealand’s local favourite Wyn Masters (NZL) will also be pulling out all the stops.

“The first event is always the most exciting of the year, and being in such a rad place like Rotorua just adds to the anticipation,” says Josh Carlson, Giant Factory Off-Road team rider.

Final competition culminates Saturday, Mar. 29, with the Crankworx Rotorua Slopestyle, which will determine the sole athlete capable of chasing the new Crankworx Triple Crown this season, a title earned by winning all three Slopestyle events in the tour. Canadian Brandon Semenuk (CAN) appears to own Slopestyle. As the only rider to win at Crankworx Whistler, Crankworx Les 2 Alpes and a Crankworx Colorado event, not to mention the fact he has won Whistler’s Red Bull Joyride three times, all eyes will be on the Canadian from Squamish, B.C. Waiting in the wings, Brett Rheeder (CAN), who has come second to Semenuk on a number of occasions, Martin Sӧderstrӧm (SWE), who is returning from injury, and Anthony Messere (CAN), who landed the top podium spot in Les 2 Alpes in 2014, will be shooting for the win.


Crankworx is taking its coverage to the next level, crowd-sourcing video and breaking new storytelling ground to cover six hours of enduro racing in a two-hour webcast. The first half of coverage will showcase the six stages leading to the Stage 7, broadcast live as the race unfolds. Join us on Twitter, Instagram, Facebook, and Google+ and hashtag video clips for #CWXLive and #CWXRotorua.
High Resolution Photo:  ow.ly/KEHaN
Photo: Adrian Marcoux
Cutline: Adam Craig cuts a tight line through the trees as he tackles Whistler’s notoriously rooty terrain in the SRAM Canadian Open Enduro; riders will be treated to a smooth flow ride in the Whakarewarewa Forest in Rotorua.