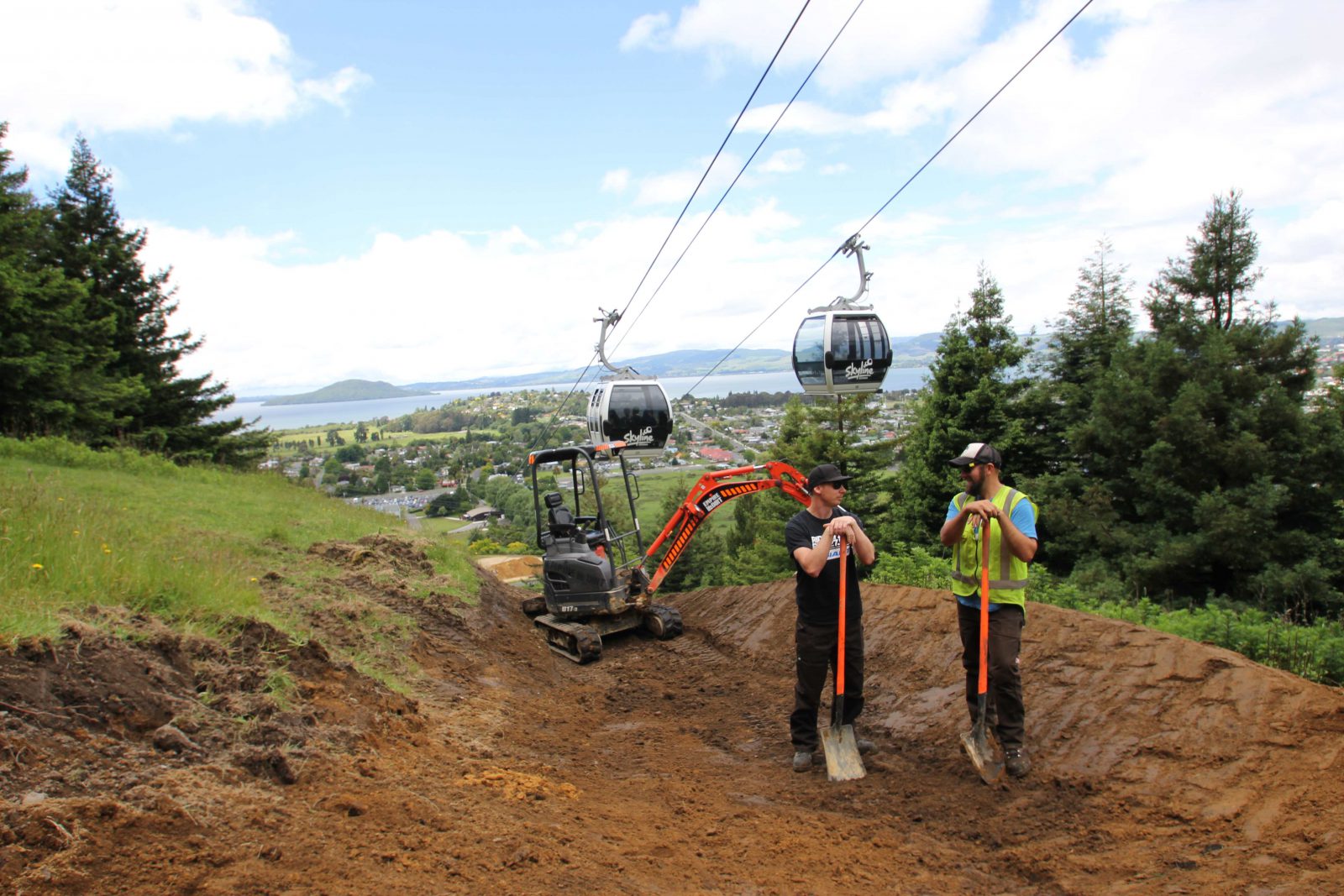 The dirt’s been turned over, construction has begun and it’s all go as the specialty mountain bike trails start to take shape on the side of Mt Ngongotaha, in preparation for Crankworx Rotorua.

Crankworx is the world’s largest mountain biking festival and it will be in Rotorua from 25 – 29 March, 2015 featuring the best pro-athletes as well as competitions, concerts and culture.

The Crankworx trails are being built by Empire of Dirt’s Adam King and Chris Martin, as well as Extramile’s Tom Hey and professional Kiwi slopestyle rider Kelly McGarry at Skyline Rotorua’s Mountain Bike Gravity Park. They include a Downhill line – called Hell Track – a Pumptrack, Speed and Style and a Slopestyle course.

“It feels good to start turning over the dirt after a few months of anticipation and planning.

“We’re aiming to build trails that challenge the world’s best riders as well as provide excitement for the thousands of spectators in attendance.

“What’s unique about these trails is how good the dirt is. Overseas riders will also be blown away by how enthusiastic the New Zealand mountain biking community is to have such a high-profile event here.”

Rotorua is home to unique volcanic soils, due to its rich history of volcanism and geothermal activity. The majority of the soil in Rotorua’s mountain biking areas have the perfect balance of 40% sand, 40% silt and 20% clay, meaning it is both easy to dig up and compacts down again perfectly.

Once completed, the world-class downhill trail will feature big jumps, steep sections and gnarly off camber runs. Riders will take between 2:40 – 3:00 minutes to get from top to bottom.

The Downhill trail starts on Ngati Whakaue Tribal Land’s airstrip at the top of Mt Ngongotaha and finishes at the bottom of the Skyline Rotorua property, while the Pumptrack will be located in the top carpark area. The Speed and Style track starts about 200m up the hill and finishes at the same location as the downhill track. All trails are due for completion by early March 2015.

The Slopestyle track is being built by Extramile and building will start from mid-January to February, with Tom and Kelly coming up from their base in Queenstown to build the specialist course.

Adam and Chris established Empire of Dirt a couple of years ago, after having travelled the world riding and trail building in the likes of the US and Whistler, Canada – the original home of Crankworx. Some of their well-known local work includes the Skyline Rotorua Mountain Bike Gravity Park, the Dodzy Memorial Skills Park and various trails in the Whakarewarewa forest.

“We have both ridden bikes since we were kids and after spells riding dirt bikes, we ended up mountain biking again, which has taken us around the world, building and riding.

“We feel stoked to have been given this opportunity to be building trails for the best riders in the world at such a prestigious event. With our friends Tom (Extramile) and Kelly, we feel we can create something unique, which we are proud to put our names to.”

Events during the week of Crankworx Rotorua include the Australasia Whip Off Champs, Rotorua Pump Track Challenge, Dual Speed and Style, Downhill, Crankworx Rotorua Enduro (as part of the Enduro World Series) and the kickoff of the Crankworx Triple Crown of Slopestyle.

There will also be the Bikes and Beats Music Festival featuring New Zealand’s top artists and for the families – Kidsworx as well.

To get your tickets, visit Ticketmaster with a link accessible at www.crankworx.com/rotorua