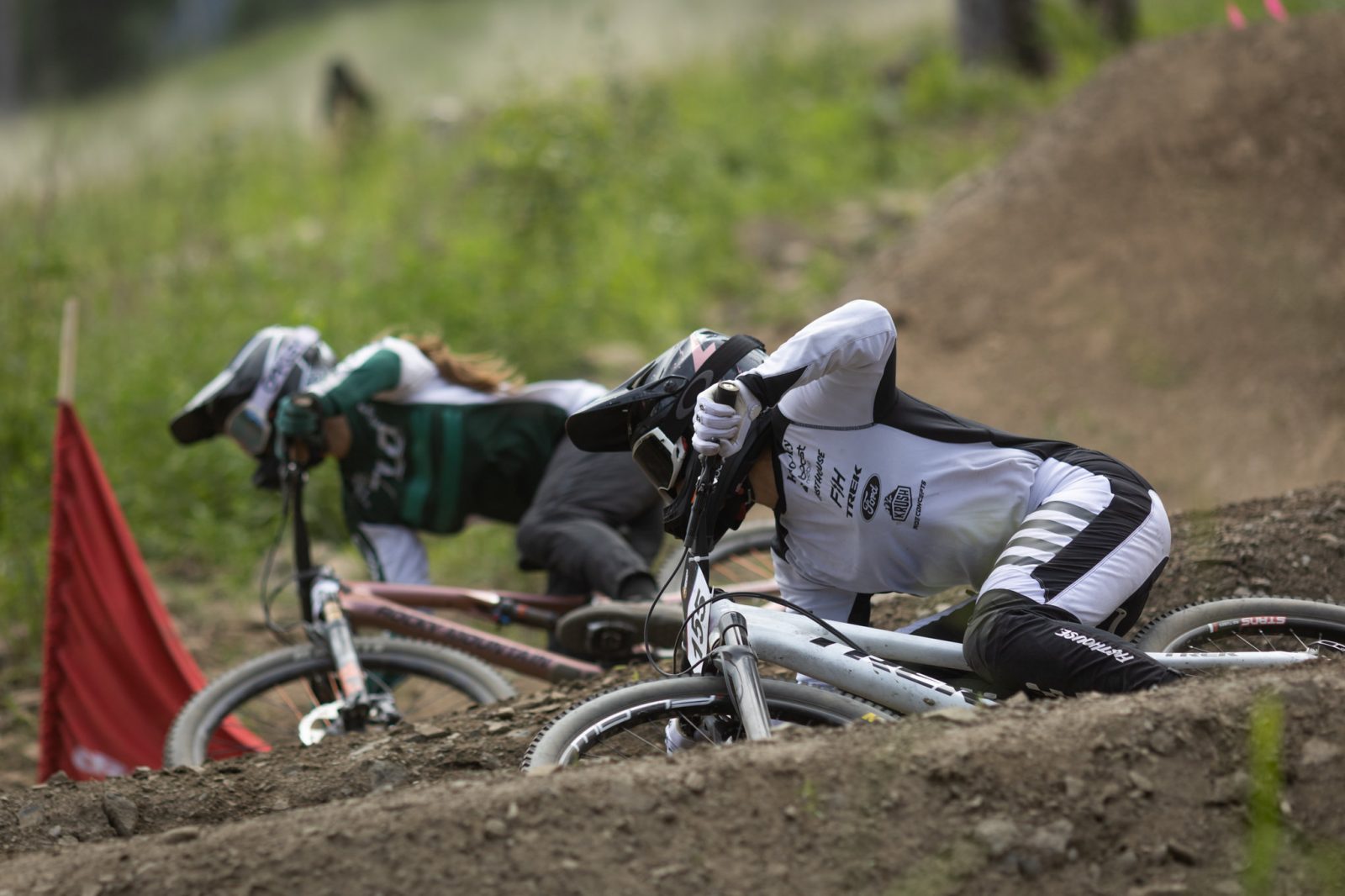 The vibes were high on day one of Crankworx Summer Series Canada at SilverStar Bike Park. We officially kicked off the first race of the summer series season on the SilverStar Dual Slalom track, which could be best described as fast, dusty, and loose.

Meanwhile the slope riders were going anything but chill on their second day of training. A lot of tricks were being thrown down; the most notable being a historic move by Australian slope rider, Mike Ross. In case you’ve been living under a rock, Mike Ross pulled a world’s first with a cash roll off a flat drop like a boss. Dawid Godziek also got the people goin’ when he landed fakie on the surgeons table to a tail whip off the 25 foot drop. If this is how the slope athletes are treating their practice runs, this Sunday’s competition is sure to be a banger.

Back to the Dual Slalom race recap, the podium wasn’t the only thing these riders were battling during the race. The Dual Slalom track built by Vernon’s own, Bas Van Steenbergen (who also happened to take the silver medal in the men’s open category today!) had all the riders completely puzzled, perplexed, bamboozled, downright led astray on how to best ride the rhythm section.

“You do have to commit, you can’t just ease into it,” Bas said of the aptly named ‘rowdy right’ of the rhythm section. “You are either rolling through it or you’re going pretty fast so I guess if you’re on the first couple of runs, not entirely sure, things can pretty rowdy – I could see that. You gotta fully commit to it.”

It was a beautiful thing to watch the pros, the groms, and local shredders all come together to strategize and session the rhythm section during training. You could find the 2021 Queen of Crankworx, Vaea Verbeeck, breaking down the precise lines for those who were new to the course.

“I love that rhythm section,” Vaea said of the complexity of the course. “That kind of precision where you have to hop and land properly, there is one side where it was really hard to be precise, you have to suck up that roller to get a good jump into the lip and get a full transition to the next. That was a battle every single lap, but it has been a fun puzzle to solve.”

In the end it was Australia’s Harriet Burbidge-Smith and Jackson Frew who successfully cracked the code and got the fastest lines on the track for the women’s and men’s open category.

“It’s such a fun and tight course,” said Haz on how she was feeling taking the first gold medal of the summer series. “Most slalom courses you can be on the edge and be sweet, whereas this one you almost have to back off just a tiny bit through that rhythm streak. I had a crash in my first run and got lucky that someone else made a mistake too so I’m stoked I made it through but it catches you in that section, so you have to be switched on.”

From seasoned pros to first time gold-medal winners like CWNEXT U15, Canadian rider, Drew Solmes, the level of stoke is palpable here at SilverStar Bike Park.

“I feel good, it’s my first time ever winning a mountain bike race,” the chuffed young rider, Solmes, said. “I had a smooth run in the rhythm section, some good corners, and overall good run.”

The podium finishers aren’t the only ones celebrating. The top two not pre-qualified finalists of every age category in the Dual Slalom race have received entry into Crankworx Whistler. With Crankworx Whistler just around the corner, this Summer Series allows for the perfect practicing grounds for the world tour.

“The Summer Series for me is a good build up to get some time on the bike and do some racing in dual slalom and pump track,” said Australian Jackson Frew on the Crankworx Summer Series Canada at SilverStar. “I don’t normally get to do that too often and hopefully it builds into a really solid time in Whistler.”

Up next is Pump Track at SilverStar Bike Park. All events at the Crankworx Summer Series Canada – SilverStar, are free to watch for the public, so get on up here! Full schedule: HERE.