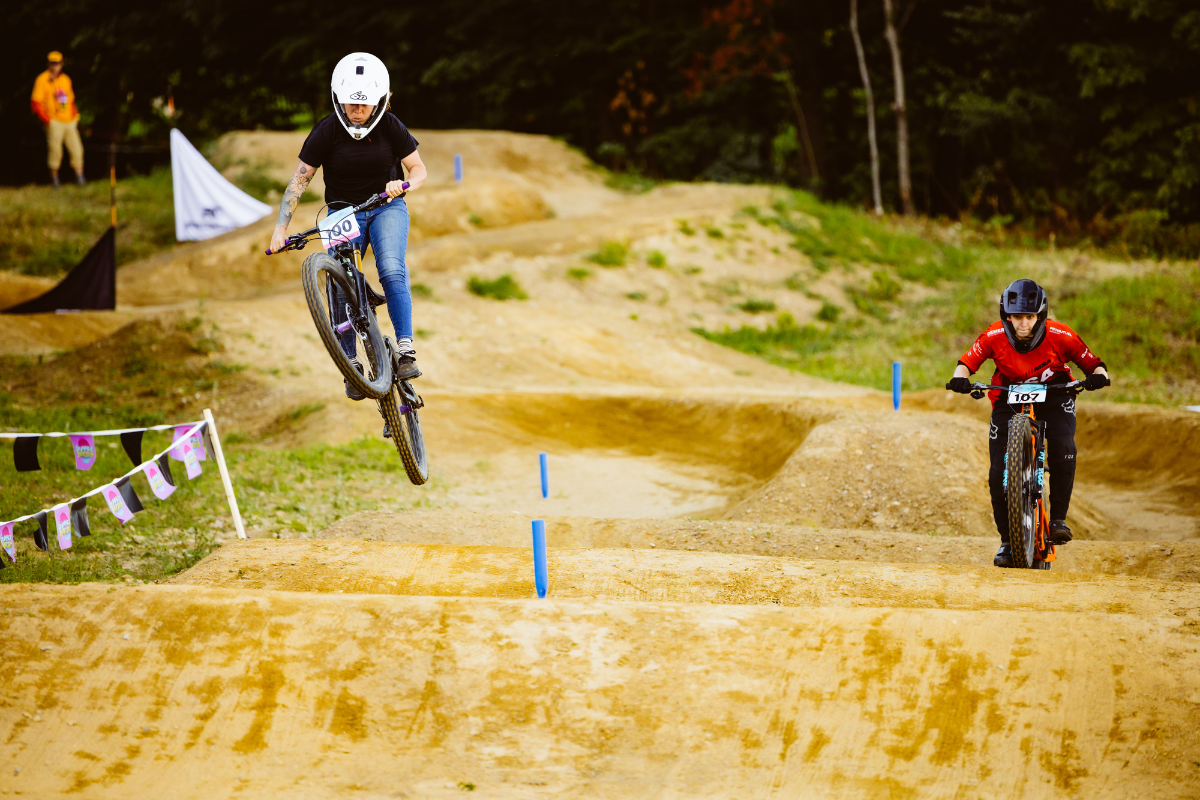 It was tight racing throughout the event day, many of the match-ups within three tenths of a second between the two. Riders were battling it out to find out who would be named the fastest on the course. Top finisher of the open women’s category, Shealen Reno, started the race day with very low expectations after tearing her PCL from a dirt jumping crash the day before.

“Because of the injury, I came in with super low expectations,” Reno commented on how she was able to give it the gas during her race runs despite her injury. “I was pedaling around in the parking lot to see if I could even do that. I was playing it literally minute by minute. Then I tried a few practice laps and that felt ok, and planned to not pedal and just pump. Then it got to race time, and I decided not to think about the injury. My mind was telling me ‘no’ but my body was telling me to ‘go’.”

The gold medal match-up for the Open Men’s category was Bas Van Steenbergen against Quebec rider, Jean Lefrancois. Lefrancois fought a hard battle but in the end, Bas took the top position by 1 second.

“It was a really fun track and provided a good amount of technical riding,” The Crankworx Summer Series Canada Men’s Champion said of the last racetrack of the series. “The faster you went, the harder it became to hit it clean and do different lines through it. It’s pretty much everything you can ask for in a dual slalom course. The flat corners were fun it was great to have a big sweeping corner at the start that you had a lot of speed into. You had to really manage your speed into it which was awesome and then you had the classic slalom flat corners. There was some different lines in there so I think that was awesome and it would be sick to see that more.”

“I crashed once in my first run of the finals,” Maude said of her race runs against Shealen. “It was getting a bit slippery at the end and everyone was giving it their all, and it’s really intimidating. There was only four of us at the top in the end so the intimidation was real. On the second run I still gave it my all, but I made a mistake at the start of the second run which didn’t help my time. It was overall really fun, Shealen is really cool and I’m really happy for her.”

That concludes the Quebec City stop as well as the overall 2022 Crankworx Summer Series Canada, and many of the Quebec riders are hungry for more to come next summer. “I’ll be back next year for sure,” Jean Lefrancois said of his experience at the Quebec City stop of the Crankworx Summer Series Canada. “I think this summer series stop was perfect. At the beginning, my friends and I were skeptical because of the five different locations, but then once you are there, it was so fun and it ended up being sick to check out the riding at all these different places. Next year, I’m going to bring more people from my town Bromont and get as many friends as I can to register to race.”