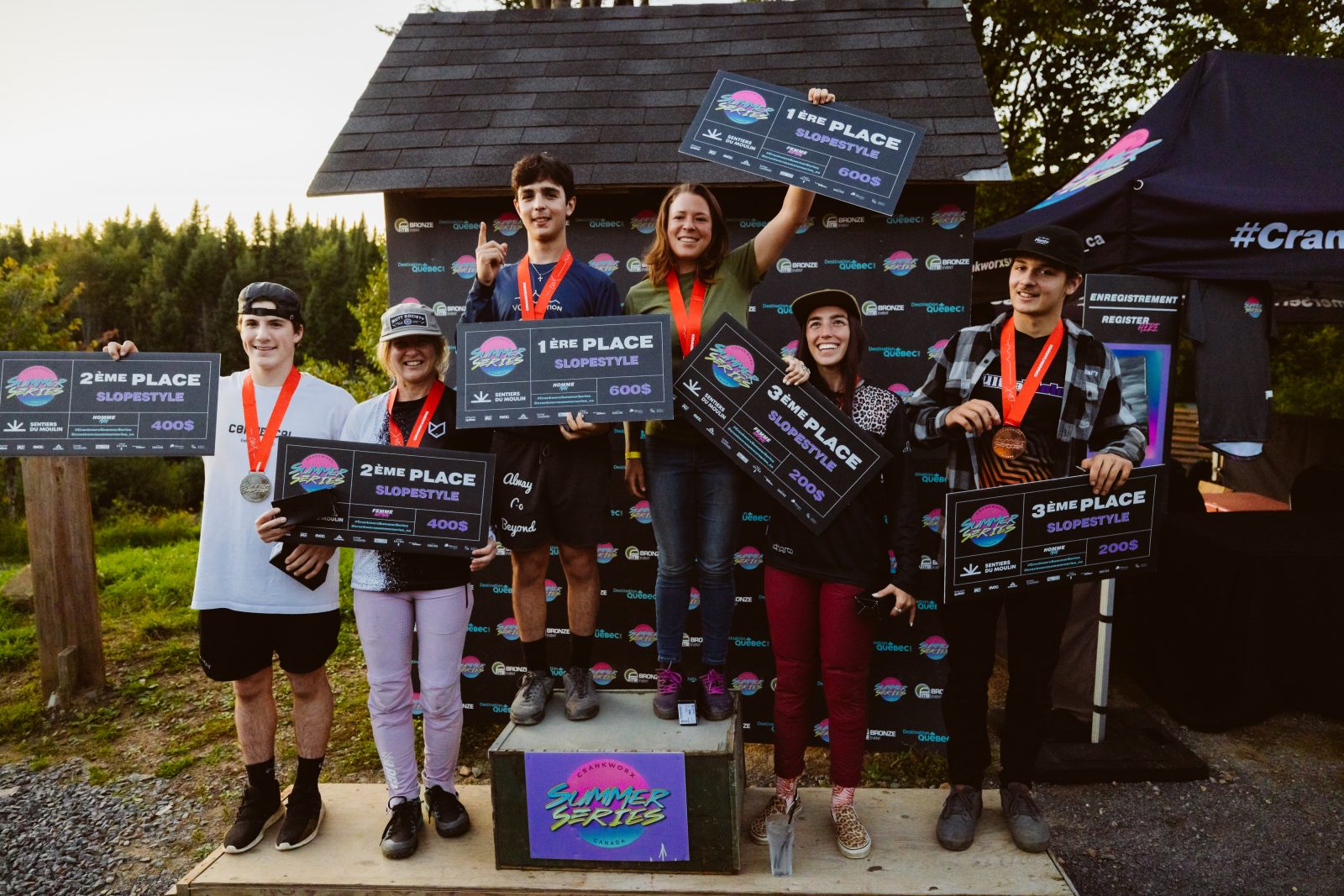 We are now at the midpoint of Crankworx Summer Series Canada – Québec City, and yesterday we saw the Bronze-Level FMB Slopestyle competition Sentiers du Moulin. The day was full on with a training and competition for both open men and women, as well as practice for the upcoming Air DH race at Vallée Bras-du-Nord.

“It was so much fun,” the Texan rider said of the Slopestyle competition. “The course was super rad. It wasn’t too technical so you could really just focus on the tricks you wanted to throw. I did my first run and I felt pretty confident with it, so I tried to clean it up with the second run and it felt super smooth. I did what I wanted to do today.”

“For my first time at the Crankworx Summer Series, it was so fun to be out here in Québec being with such talented riders on a new course out here,” Angiulo says of finishing top spot in the men’s category. “It feels really good when the hard work pays off. Especially when coming off an injury a month ago, I broke my elbow. I’m just warming back up with the comps and getting back into it. I just always remember to keep positive and always go beyond.”

The vibes from today’s slopestyle competition at Sentiers du Moulin truly aligned with the Crankworx Summer Series Canada’s overarching theme of paving the path for progression.

“I really never thought about doing slopestyle before, and then when I was in SilverStar I got invited for the Crankworx Slopestyle Session at SilverStar Bike Park – I fell in love with it,” Shealen Reno said of her new found passion for Slopestyle. “All the girls told me there was going to be an event at Big White to follow, and I thought ‘I have to go to that’. Now I’m so fired up with this, it’s so much fun. Big White was my first event. I placed fourth, and I was super happy with it. I did everything I wanted to do and it was so much fun.”

Ilabb’s rider from New Zealand, Jayden Fleming, also dipped his toes in the slopestyle waters today competing for the first time at a bronze-level slopestyle event.

“My first slope competition,” the Kiwi rider, Fleming said. “It’s something I’ve always wanted to do, and it was cool to try out a bronze level competition and start on some slightly smaller jumps. The guys that are riding the diamonds and golds are pretty gnarly so I think this is a good place to start. Out of the 16 men’s riders today, 13 of us had our first go at a proper slopestyle event so it was pretty cool for this to be a part of the summer series, at the grassroots level.”

Crankworx Summer Series Canada – Quebec City’s Bronze-Level Slopestyle competition really ignited a fire for many of the riders today, like Shealen Reno, who’s already got plans in the works for her trick progression over the winter season.

“My plans for the future have actually changed completely within the past few months,” Reno said. “I want to go home and get an airbag and just learn as many tricks as possible.”

We’ve got Air DH up next for day three of Crankworx Summer Series – Quebec City at the spectacular Vallée Bras-du-Nord where the top two finishers of each category will receive a guaranteed entry into the Crankworx World Tour circuit at Crankworx Whistler 2023.