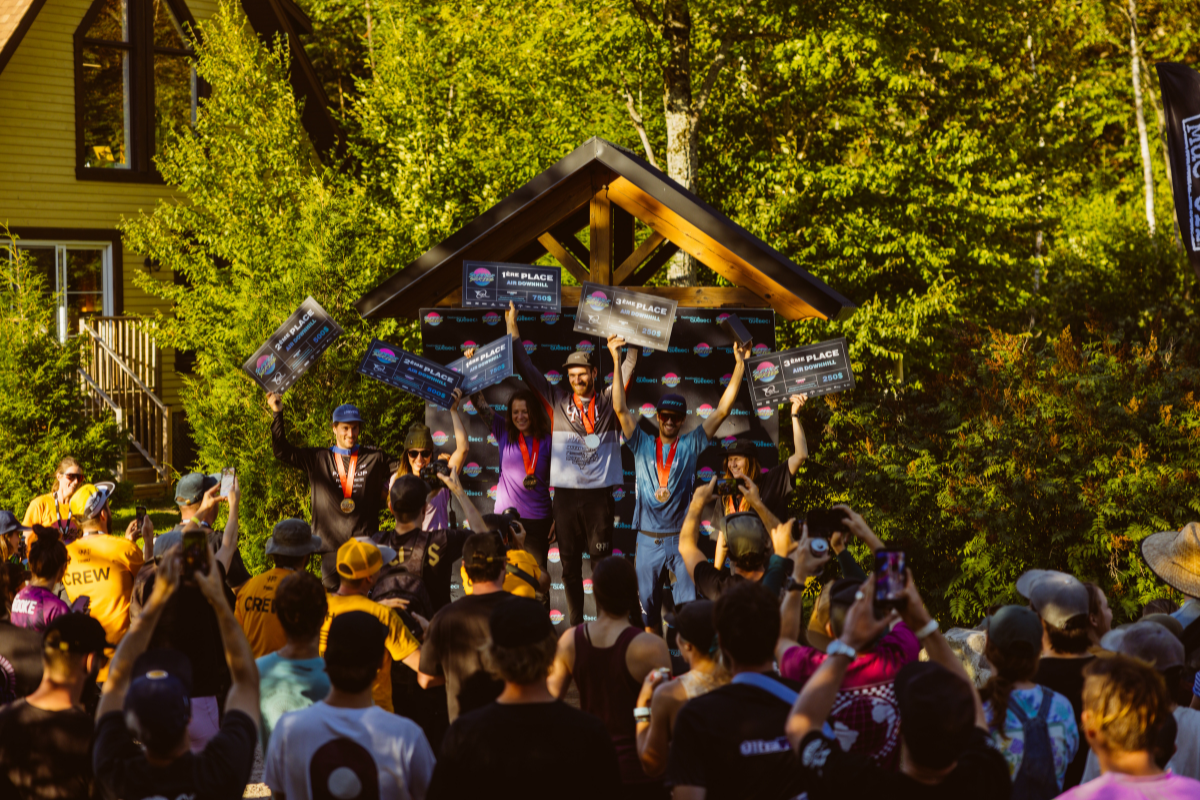 Day three of Crankworx Summer Series Canada – Quebec City at Vallée Bras-du-Nord was action packed and riders were really putting on a show for the spectators. The Quebecois spectators really know how to turn on the hype with athletes revving a pit bike at the podium, and crowds of spectators partying in the woods next to the track.

The dirt has been primo on the brand new Godzilla track at Vallée Bras-du-Nord. After a few rainy days to now racing on a beautiful, sunny, summer day…that’s a recipe for hero dirt and the riders were loving it!

Fastest time of the day came from the King of Crankworx, Bas Van Steenbergen who took the gold medal for Crankworx Summer Series – Quebec City Air DH. It was Bas’ first time riding this course, and he was pleasantly surprised.

“The course was sweet,” Van Steenbergen said. “There are some really fun rhythm sections and some features that kind of differentiate people a little bit. There were some cool gaps on the track. It was a good Air DH track for sure. It’s comparable to a longer version of the Rotorua Air DH track. It’s pretty smooth and but it has lots of different kinds of jumps on it. It was a good length too which is awesome.”

“It’s so amazing, I honestly had no expectations going into today,” Reno said. “I just wanted to have fun, jump some big jumps and shred with some ladies, and we did that! I luckily came out with the win so I’m super stoked. I did my first Air DH race at SilverStar and then my second at Crankworx Whistler. I just try to have fun and see if I like it, and it’s pretty badass! I love jumping. It’s probably my favourite thing to do on a bike.”

We saw some Quebec locals on most of the podium spots today including the very local, Gabrielle Simoneau who took the silver medal in women’s open category of Air DH. Gabrielle lives across from Sentiers du Moulin, the location of the Slopestyle event on day two of Crankworx  Summer Series Canada – Quebec City.

Jonathan Lefrancois came in second place of the men’s open category of Air DH and is from just outside of Montreal, Quebec.

“I’ve never ridden this course before, and I was pretty surprised,” Jonathan commented on racing the Godzilla track for the first time. “We are pretty far out, and this track is comparable to A-Line. It’s amazing and there’s not any other jump trail like this in Quebec. It’s probably the best one in the province. The goal here was to have fun, and I had fun and finished second so it was good.”

Jonathan, Gabrielle and the top two finalists in the CWNEXT categories have all earned themselves a one way ticket to Crankworx Whistler in 2023.

Huge props to CWNEXT U19 rider, Tyler Hutson, who not only earned his entry into Air DH at Crankworx Whistler 2023, but he also got the second fastest time of the day at 3:51 just under the King of Crankworx, Bas Van Steenbergen.

Next up is Sunday Funday at Le Massif de Charlevoix which includes Kidsworx events, as well as ride with pros Bas Van Steenbergen, Shealen Reno and Jayden Fleming, with over 120 registered kiddos. Many of the riders will also begin practice for the closing event of Crankworx Summer Series Canada – Quebec City – Dual Slalom at Mont-Sainte-Anne.

“Hoping to make it three for three heading into Dual Slalom in two days,” Bas said of his gold medal streak at the summer series in Quebec City. “Keep it going. Slalom is one of my favourite events so I’m looking forward to that one. Stoked to hang out in Quebec and check out the sights. It’s been really fun!”