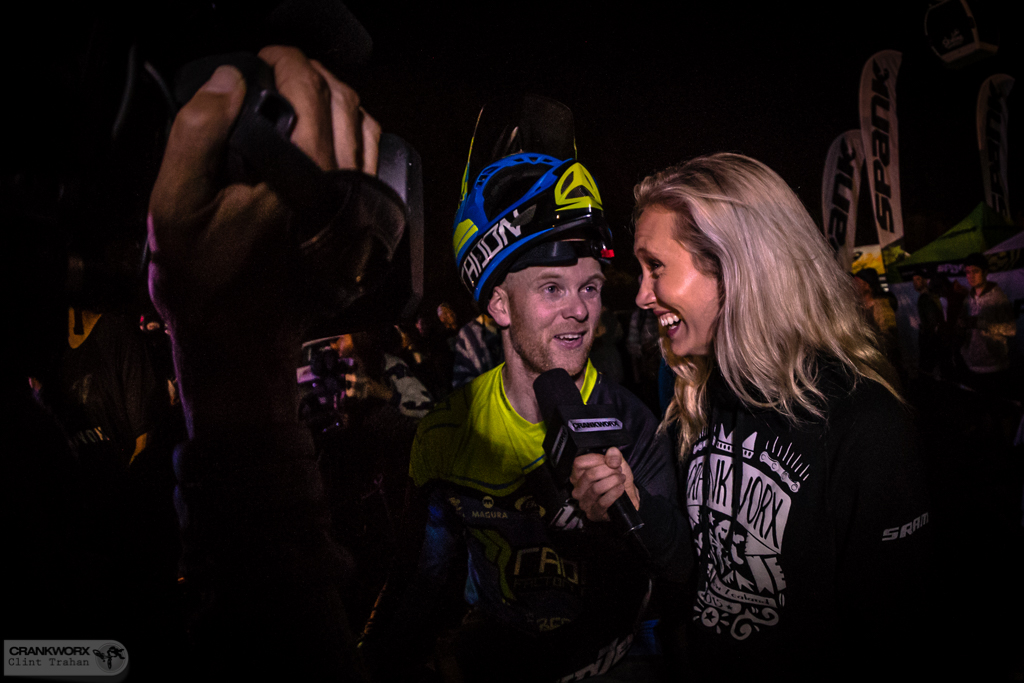 ROTORUA, New Zealand, March 27, 2015—It was a double Dutch win in the Rotorua Pump Track Challenge presented by RockShox as Joost Wichman and Anneke Beerten took out crowd favourites.

Paired with Keegan WRIGHT (NZ), Wichman (NED) admitted it was a pretty cool feat to beat the younger Wright, a New Zealander half his age. But the big story of the night was in the start gate of the woman’s final as four-time women’s Crankworx Whistler Pump Track winner Jill KINTNER (USA) attempted to start at the wrong angle, missing her race with Anneke BEERTEN (NED).

“I just wanted the race, but got caught in the gate and I guess Anneke didn’t want to have a rematch. So second is sweet,” said Kintner. “…It’s my fault, really. I should have been at a better angle, so it wasn’t really a race, was it? It wasn’t very exciting for fans.”

Quite to the contrary, the crowd gathered under the lights seemed to revel in the suspense of the second to last race of the raucous night. Periodically doing the wave around the circular track—a first for a Crankworx Pump Track—the long wait for the officials decision on whether Kintner’s missed start would be result in a rematch had the dirt stadium buzzing.

It was ultimately ruled Kintner’s miss did not amount to a malfunction, so did not warrant a rematch, though her tire had been caught in the bracket riders load their bike into in order to launch from the start gate. It was determined, the catch was the result of rider error, leaving Beerten with the win.

“Pump Track is such a cool thing to do. The whole vibe here and taking the win is amazing,” said Beerten. “The crowd were all wild and loud, and it’s amazing to have them in Rotorua and to be riding in Rotorua. It’s just sick.”

Joost echoed her sentiments, noting this win has been a long-term goal.

“I organize Pump Track races myself in the Netherland and Germany, so it’s actually cool to win one at Crankworx. I’ve been trying for a couple of years now to win one in Whistler or France, so it’s cool,” he said.

The final standings were:

Crankworx Whistler brings the world’s Downhill, Slopestyle and Enduro legends home to the Superfans, rising stars, industry innovators and the next generation of mountain bike riders for 10 days of competition, concerts, and culture.

Anointed by dirt, powered by passion, the Crankworx World Tour travels to Rotorua, New Zealand, Les Deux Alpes, France and culminates in its Canadian home base of Whistler, B.C.
Tread among the gravity-fed, join the bike-minded
www.crankworx.com