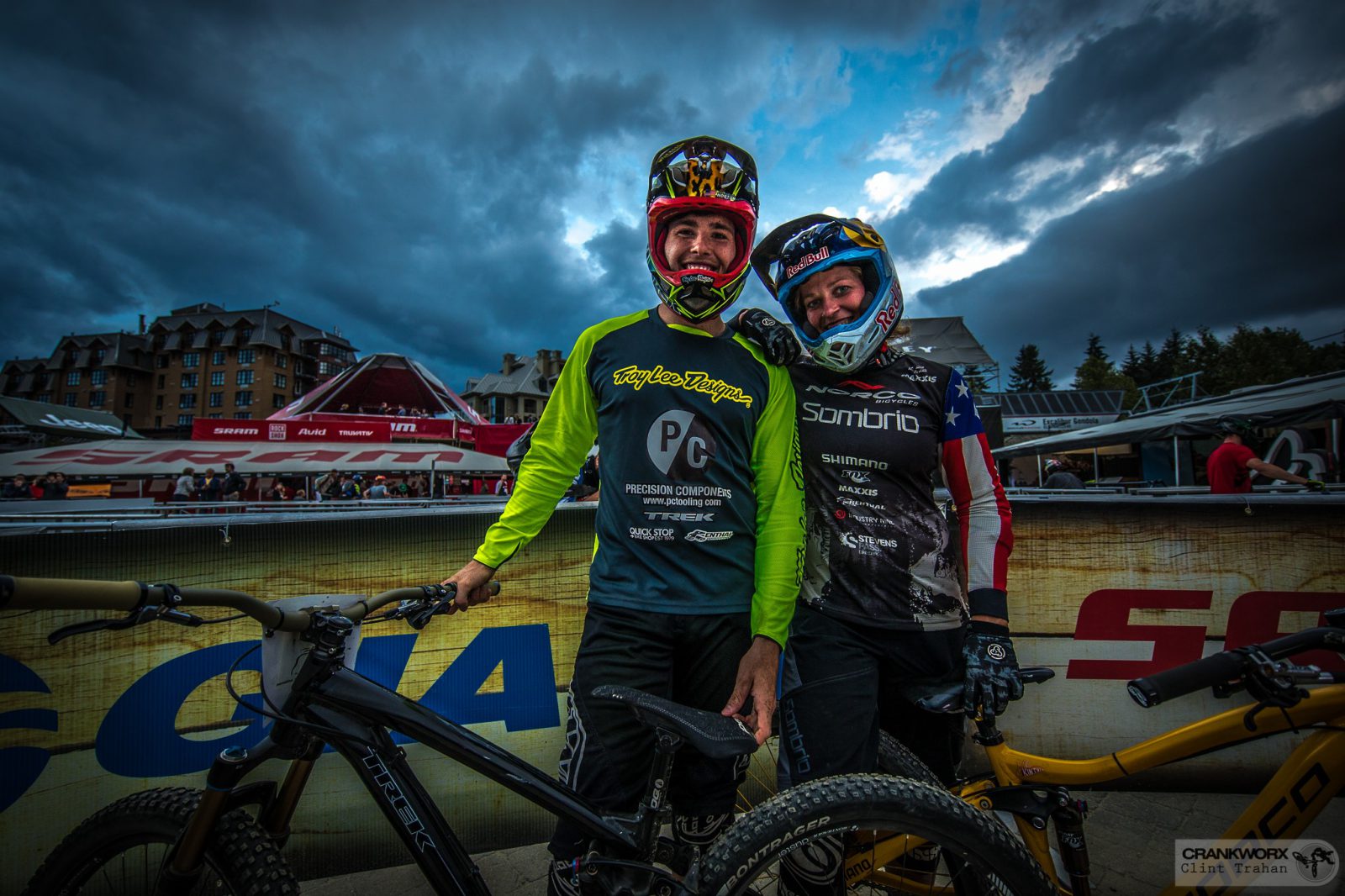 WHISTLER, BC August 14, 2015—It’s often said that careers begin at Crankworx and American rookie Dakotah NORTON (USA) is the case in point. Norton is certainly making a name for himself this year, winning the Dual Slalom presented by GIANT in addition to landing in third place on the podium at last night’s Ultimate Pump Track Challenge.

The dual slalom track was fast and fierce, forcing riders to lay everything on the line, every single time. The evening was filled with tight match ups and hairpin margins. Norton and, third place finisher Bernard KERR (GBR), were neck and neck in the Semi-Final, with Norton taking the win by a .03-second advantage.

Martin MAES (BEL) showed his true colours, consistently crushing his opponents, oozing style before bailing on his first lap in the Big Final to land in second place.

“The course is really tight. It all comes down to how quickly you can get in and out of those corners,” said announcer Tristan Merrick. “Less pedalling means less bogging down your suspension. You want to flow through the course as much as possible.”

With Mayes unable to race in the second round of the Big Final, Norton dropped in for a victory lap.

“I’m absolutely speechless,” he said as he gave his interviews in the finish corral. “It was dusty on course, but it made for excellent racing. You have to go pinned every single lap and put 110 per cent on the line every time to win.”

For the ladies, it appears that three times is the charm for Dual Slalom winner Jill KINTNER (USA), who also nabbed a first place finish in 2013 and 2014. Kintner and the woman named the 2015 Queen of the Crankworx World Tour, Anneke BEERTEN (NED), went head to head in the Big Final. Beerten delivered two solid laps, but in the end Kintner came out on top.

“These days are action packed with lots of practice and racing so I’m really happy to stay focused enough until this point in the week. It’s an aggressive track. A lot of mental energy goes into a day here. My strategy was to try and conserve energy and be as fresh as possible for this afternoon,” said Kintner in the finish corral. “I think this was one of the best slaloms they’ve had. It was a little bit more technical – I like that it’s a little more challenging and high speed.”

Beerten has yet to receive her Queen of the Crankworx World Tour title, however, the announcers let slip it is now impossible for anyone to catch her, given her 250 point lead over her nearest competitor, Kintner.

Tomorrow… we’ve got the biggest event of Crankworx Whistler, Red Bull Joyride. All eyes will be on Brett Rheeder as he attempts to clinch the inaugural Triple Crown of Slopestyle.

After three amazing rounds of elite Slopestyle action, the FMB Diamond Series lands in North America for Red Bull Joyride at Crankworx Whistler. Competing at this event can be an athlete’s career highlight. Winning it makes you a legend. For Brett Rheeder (CAN), a victory at this FMB Diamond Series event will award him with the inaugural Triple Crown of Slopestyle and a $75,000 prize, as well as potentially seal an early victory of the FMB World Championship. Check out the teaser Red Bull TV has prepared for this ultimate slopestyle contest here: www.crankworx.com/videos/241

High definition videos will be uploaded daily: Www.boomboxgroup.com/CWX_WHISTLER_VNR_RAW_DUAL_SLALOM.mov
Daily videos can be found at: crankworx.com/videos