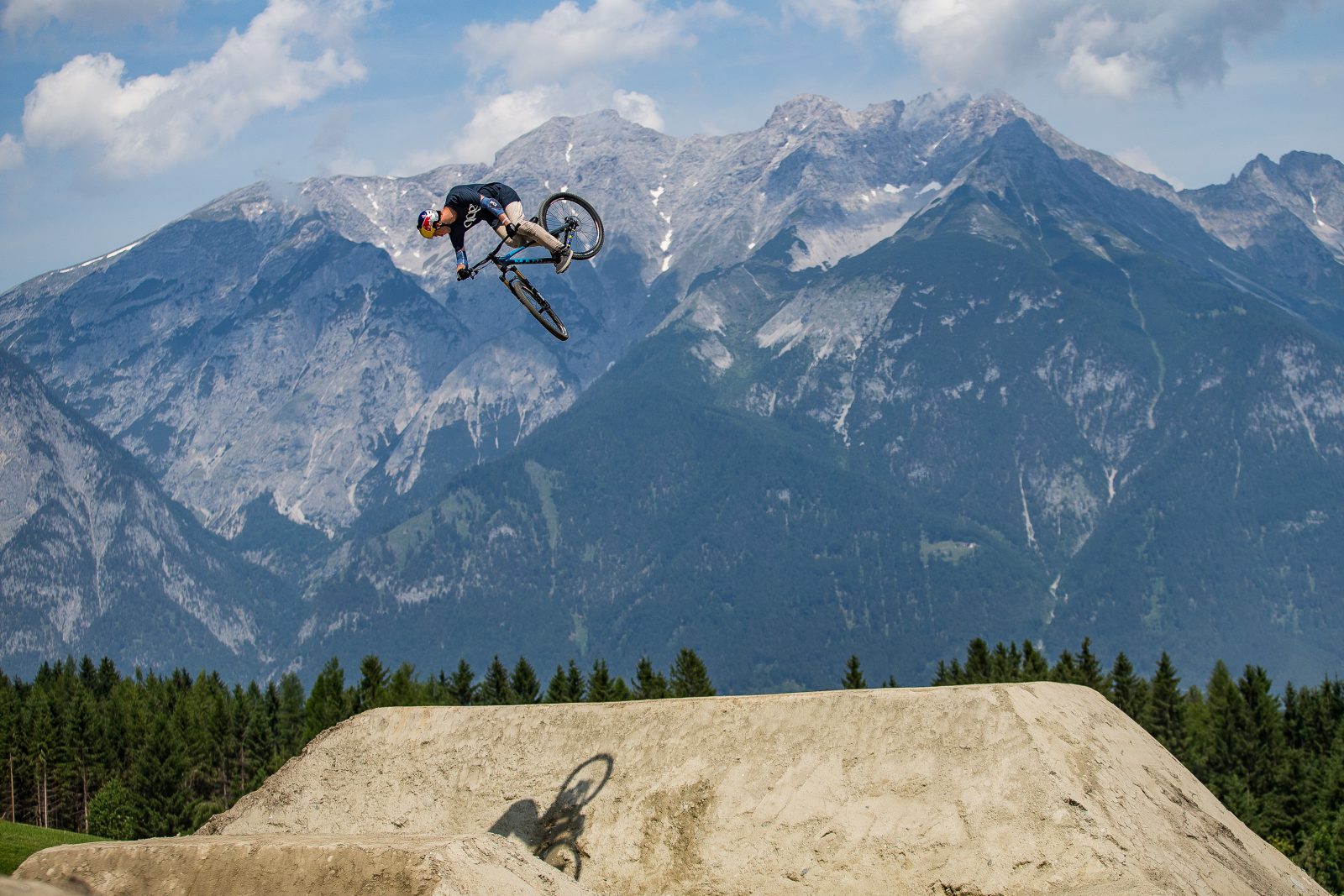 Innsbruck, AUSTRIA; Saturday, June 24 —A cashroll tail-whip wasn’t even something American Nicholi Rogatkin was thinking of coming into Crankworx Innsbruck, but with his back to the wall, an almost unbeatable run from Brett Rheeder, grace and variety supreme, on the scoreboard, he took a risk—and it paid off.

“I wasn’t really ready but as a miracle, I had to do it. That last maneuver, for me, was honestly one that I had to, you know, not think about it until you do it,” he said. His big move from last year, a 1080 rotation, having failed to tip the scales on the first run.

Always a visible cheerleader for the other riders, running around the finish coral to congratulate them, Rogatkin said he focuses on cheering on the others to keep his head in the game. Saturday afternoon’s event gave him plenty of fodder.

Whip phenom, 18-year-old Emil Johansson (SWE), who came into the contest leading the Slopestyle series, curried favour for riding his bar to save falling at the end. Szymon Godziek (POL) threw a front-flip tailwhip, though he didn’t land it, one week after his first Crankworx podium. French Dual Speed & Style winner Tomas Lemoine threw down a personal best for third place.

But it was Rogatkin’s afternoon. Doing what he does best—big tricks—he finished off the contest.

“Since I started, the judges have been telling me there is still a lot of tail-whips in there. It’s what I excel at, but if I can push harder doing those same tricks I can do, I’m going to do it” he said. And he is redefining the sport.

Asked what impressed the judges, Pierre Edouard Ferry said his crew was honestly blown away by the magnitude of Nicholi’s tricks.

“There is like a split now. There is a guy like Nicholi, which is going to go crazy with his own tricks, and then there’s going to be like Semenuk, Rheeder and Lemoine-style, who are going to drop a ton of tricks that we’ve known for a long time,” he said.

Rheeder’s run was packed. He had an opposite cork-720, overspun because it was on a hip-jump, and a 720-barspin, also overspun on the second hip. He threw his tricks switch, regular, front and back, and he honestly looked like he was barely breaking a sweat his runs played out so flawlessly.

“It’s hard when someone like Nicholi comes in and throws a curve ball in the sport. He can come in and he doesn’t have any opposite tricks. They’re the same tricks, but nobody else is doing those tricks,” said Rheeder, acknowledging he blows everyone’s mind with what he does.

Nonetheless, it’s left Rheeder, and really every other top rider in the FMB, in a bit of a conundrum.

“It’s overall impression and trick difficulty—not so much style, like it used to be,” he said. “So, guess it’s back to the drawing board.”

While Rogatkin prepares to face the pressure of securing the Triple Crown of Slopestyle before a crowd of 30,000-plus at Red Bull Joyride in Whistler this August, Rheeder will be looking at what he has in his own bag of tricks to re-evaluate.

“I didn’t do everything I could. I could have done a better trick on the boner log, and I didn’t think I needed it,” said Rheeder.

The Crankworx Innsbruck Slopestyle presented by Kenda will be available on demand on Red Bull TV, and sitting on the homepage of Crankworx.com all summer long. Rewatch your favorite parts or catch the broadcast, if you missed it.

Video News Releases for Crankworx Innsbruck and Les Gets, including today’s Slopestyle broadcast: http://bit.ly/2rF4FcE *a highlight piece for today’s downhill, the Crankworx Les Gets Downhill presented by iXS