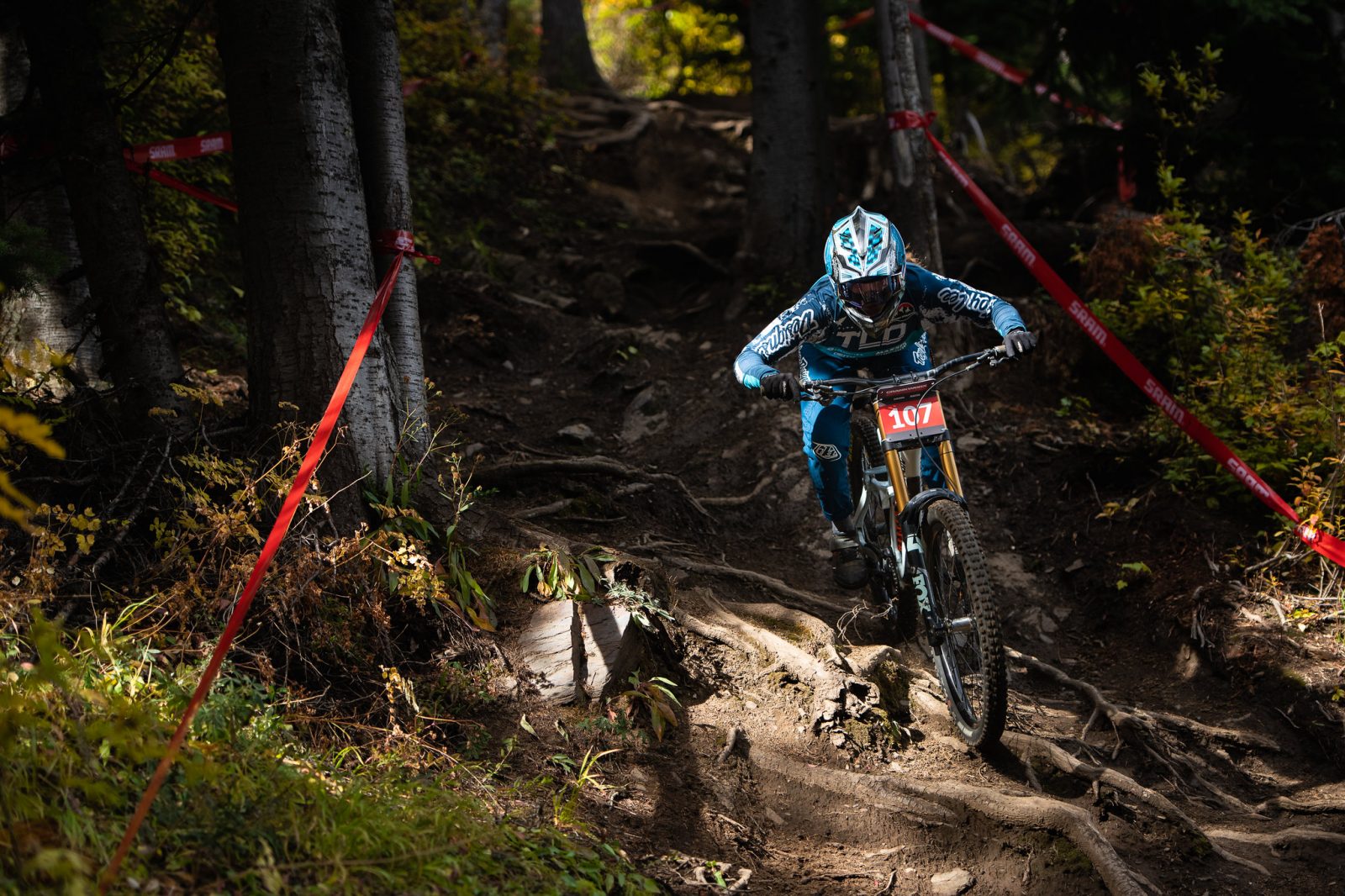 SUN PEAKS RESORT, BC, September 24, 2021 — The flecks of hero dirt have settled and the third and final race at Sun Peaks has wrapped. As the travelling road show that is Crankworx B.C. prepares to hit the road, Vaea Verbeeck and Jackson Frew are celebrating the final wins of the week after three days of racing.

For Verbeeck, it’s been a mega few days, with three gold medals in the past two days.

“That’s crazy. I don’t know, I didn’t come here expecting and thinking about all of this. But when I think of each event here, they’re just so wicked and so fun to send it, and I’m just really happy that it worked out.”

“It’s super fun,” she added of the DH track in Sun Peaks. “The biggest thing is I was really hoping I was going to be strong enough physically to hold on for how fast I want to go on that track. Because that track can take it. It’s just whether you can take it or not after a couple days like this. It’s just full-on high speed and it hooks well. So as long as you can hold on at the bottom of a steep pitch, the track can take it. It’s just really fast and really fun.”

Sharing the top of the box with her, Aussie racer turned local, Frew, who’s currently living in nearby Kamloops.

“I didn’t really know what to expect coming into today. I’ve been feeling really good on my bike and the track’s running really good, so just tried to lay down a heater and see where it put me. I’m over the moon.”

Like Verbeeck, today is also a continuation of a solid day yesterday for the men’ champ. Frew came second in the Crankworx Air DH Sun Peaks. And while the stoke levels were high today, racers have eight more days of competition ahead.

“I’m pretty blown out already,” Frew added with a deep exhale and a laugh. “I think it’s really cool to start the series off with a bit of momentum and hopefully carry that through, get recovered and head into the week with some good confidence.”

“It was really good,” she said of her race run, adding that everything went to play today. “Just like practice. Smooth, fast, having fun. I just listened to music at the top, got in the zone and had fun.”

Casey Brown rounded out the podium in third, her second podium of the series as well having come in second in yesterday’s Air DH.

And while he finished just off the podium in fourth, Bas van Steenbergen was more than satisfied with today’s effort.

“I was thinking my ideal outcome was winning Air Downhill and Slalom and getting a Top 5 here, and all of those happened, so I couldn’t be more happy,” he said of his goal heading into the Sun Peaks stop of Crankworx B.C.

His results place him in the lead for King of Crankworx, alongside Verbeeck who extends her Queen lead with today’s win.

“I think all that stuff helps me with confidence,” van Steenbergen added, looking ahead to the rest of the races at Crankworx B.C., then at Crankworx Rotorua in November. “I’m not the most confident person when it comes to race day, so every little bit of confidence helps.”

“I’m so pumped that Bas and I are leading,” added Verbeeck. “I’m especially happy for him, because it’s his first time getting that sort of glory finally. He’s just so good at all those events, so it’s really sweet to have him get a bit of that payoff. Finally. Not just first qualifiers, but actual firsts, and the points. So having that together is really special. We’re definitely really hoping that we can take it to the end like this, so we’ll see. Hope for the best.”

Next up, the ultimate B.C. MTB road trip is rolling on to Stop 2 in Kicking Horse and Golden, B.C.