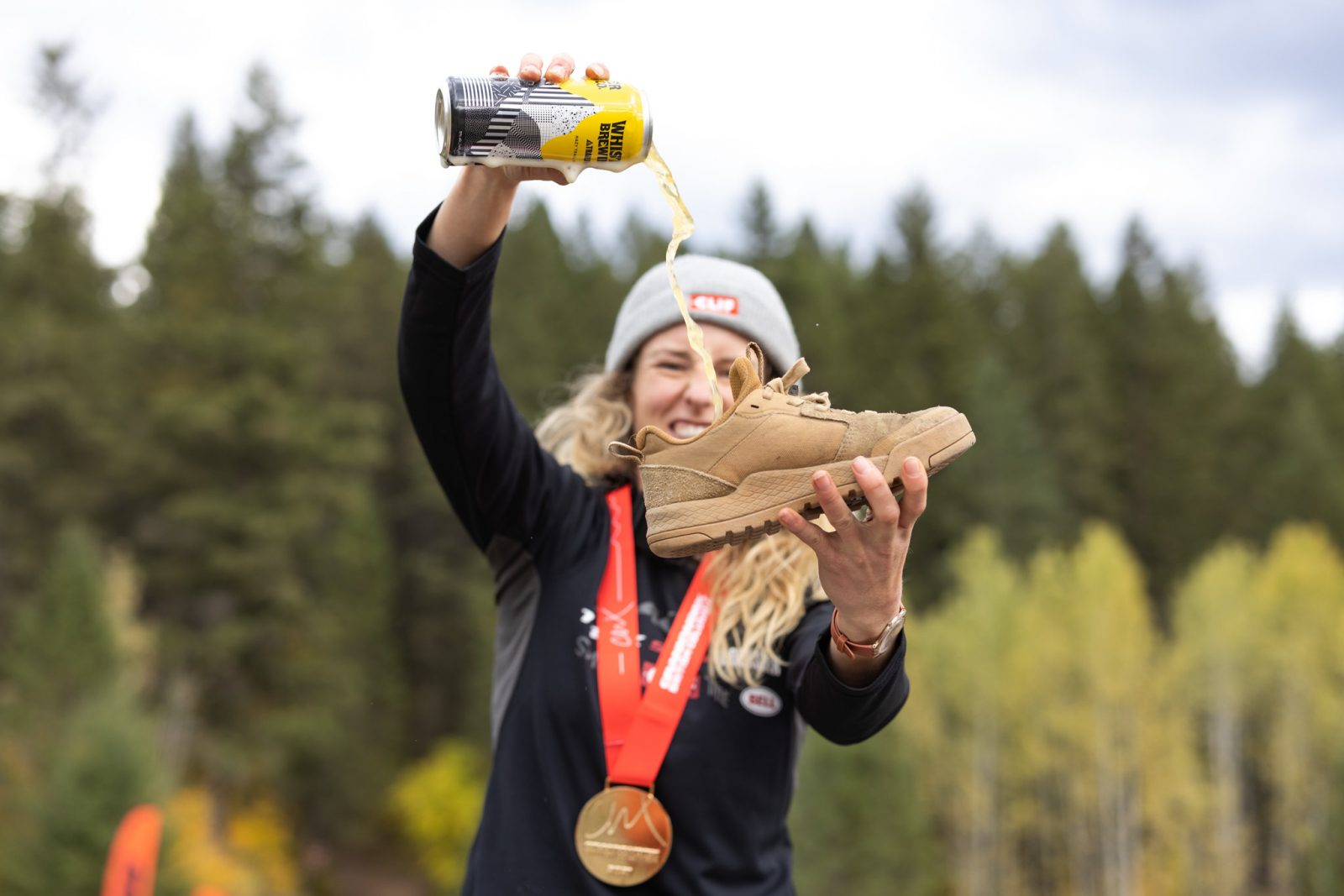 Suffering and celebration comingle at the base of Mt7 in Golden, as the storied Psychosis race crowns its two newest champions

GOLDEN, BC, September 26, 2021 — Riders new to its hallowed ground, keen to test their mettle. Repeat racers, hungry for more. Redemption-seekers, looking to take back what Mt7 took from them. And local shredders, stoked to get amongst the action and share their epic backyard with the best in the world. This morning, they all stood shoulder-to-shoulder at the top of the Mt7 in Golden, B.C., peering down the steep chute that would be the beginning of their 1200 vertical meter, 7.3 kilometer, 11 and a half minute+ race run.

And then one by one, they dropped in.

The 12th running of Mt7 Psychosis saw a mix of 25 riders, who’ve come from all over the world to compete in Crankworx B.C., come together to take a crack at the 1200 vertical meters and 7.3 kilometers of steep, rough and rocky singletrack (+ infamous hike-a-bike section).

Clocking the fastest times of the day, Joe Breeden (GBR) who’s winning run was only his third ever down the track, and Casey Brown (CAN), who earns her first Psychosis win after finishing third last year.

“It’s a pretty honourable spot,” said Brown. “I really gave it a go today. It was pretty risky, but I thought I may as well put it all on the line otherwise it’ll be a whole other year until we get to come back. Just coming here and the whole history behind the whole trail, you just think how nostalgic it is, and it’s very cool.”

“I had fun today,” she added, despite the fact that after crossing the finish line she said: “My mouth is like an air pipe right now” and later said her insides felt like they were vibrating. “I really enjoyed practicing with all the other girls and showing the girls that haven’t ridden it before where to go. Trying to help as many chicks as I can that are having their first experience with it because it was quite scary the first time, I know that for sure.”

One step down from Brown, a rider in that boat, having her fast crack at racing Psychosis. Despite that, 17-year-old Emmy Lan (CAN) seemed all confidence from her first practice run. Her performance in finals earns her first Crankworx Pro podium today, coming in 3.2 seconds behind Brown in 15:04.76.

“It feels kind of amazing and unreal to be racing with all the girls I’ve looked up to over the years,” said Lan. “It’s kind of mind-blowing. I honestly think that might have been the hardest race I’ve ever done. It’s insanely technical and difficult. And you have a hike-a-bike in the middle, then you have a couple sprints, so it’s kind of got it all. But its so much fun. I was a little bit anxious but in my mind I just told myself ‘I’m just riding my bike right now.’ It wasn’t a race at the top. I was just trying to make it down alive.”

The Psychosis track snakes down a series of trails on Mt7, starting at the iconic drop-in Dead Dog, surrounded by 360 views of the mountains around Golden. At the rider briefing in the morning, Race Director Trevor Gavura elicited nervous laughter from riders when addressing the steep chute immediately visible from the top.

“What’s really important for you guys to understand if you’ve never ridder here before, is that’s not the steep part.”

Rounding out the women’s podium was a local rider from the Golden Cycling Club. 22-year-old Lauren Dudar (CAN) was the first woman to drop in to finals. Her time of 15:14.18 was just 10 seconds behind Lan.

On the men’s side, it was a tactical approach to the whole experience that allowed the victor to clinch the win.

“I’m absolutely stoked,” said Joe Breeden. “It’s really demanding, mentally and physically that run, so to dig deep, go through the pain and have a reward for it is really nice. I’m really happy. It’s super challenging because I came here this morning, and I’d never been here before, so an 11 minute 30 second track, I think I did it in, two runs this morning to learn it all, so it’s a lot to take in in one day. And then to try and race run it in your third run, at a pace to do well, is pretty gnarly. So I’m really happy.”

“I kind of rode it all at 70%, so it was all within my control, but it was very consistent top to bottom, and the pace I could ride the bottom was the same as the top” said Breeden of what he thought made the difference. “So I think today that was the winning tactics. It’s not like a downhill race where you’re 100% for three minutes, start to finish. You have to have some tactics, and I think I played it well today.”

One step below Breeden, a rider whose long relationship the track likely made his second place finish feel like a win.

“It feels so good!” said an elated Seth Sherlock (CAN). “Amazing. I got some redemption from last year. Last year I had to race this on my trail bike and I didn’t get any practice on it, so I came in and just sort of blew up before the first sprint. It wasn’t very good. I kind of hurt my knee. So it feels really good to get back on that and get back on the podium here. I had no idea what to expect. Not a clue. I wanted to podium at some point in the event, like in the whole Crankworx, and I figured this was probably my best chance left after I didn’t in the downhill, so it feels good.”

“Aw man, it’s got that kind of prestige to it,” he added, of what this race means to him. “It feels so good. It’s such an honour to just be racing it, do podiuming here is amazing. So good.”

Sherlock’s time of 11:44.70 was just over seven seconds off Breeden’s. By far the tightest margin of the day came after from the rider who nearly knocked Sherlock down a position.

Bas van Steenbergen (CAN) clocked a 11:44.95. Over 11 minutes and 44 seconds of racing, less than half a second separated second from third.

“That’s insane,” said van Steenbergen of how close he and Sherlock’s times were. Of his podium overall, he said he could barely believe that also. “I did not think I had, even close to, a top five in me today. To get on the podium is awesome. I definitely think it helped a lot having raced this last year. There was a little bit more strategy involved this year than there was last year. So yeah, stoked.”

Van Steenbergen’s results give his overall points total an additional boost as the Crankworx season gets set to wrap in November in New Zealand. Van Steenbergen and Vaea Verbeeck currently lead for the overall King and Queen of Crankworx titles. Verbeeck finished just off the podium in fourth today.

Mt7 Psychosis ran for 10 years, starting in 1999. The storied race crowned champions like Stevie Smith and Sam Hill. In 2020, after a 12 year hiatus, it was resurrected during the CLIF Crankworx Summer Series.

The winners that year, Henry Fitzgerald (CAN) and Andreane Lanthier-Nadeau (CAN) both continue to hold the course records for this race with their respective times of 11:19.19 and 14:32.69.

“Trying to go as slow as you can is still really fast. And that’s kind of what’s always been the crux. That’s always been the key to this event,” Gavura described in 2020. “You have to give way to gravity on this course. Most courses today in the World Cups, you can kind of stop on course anywhere, but this actually has sections that are physically impossible to stop on.”

“This is definitely very unique,” said Mick Hannah, who got some of the loudest cheers of the day today. He finished his day in eighth. “The trail is amazing. And there are a few different types of terrain in there which is super fun. It starts off steep and shaley, then there are some fast, flowy, rooty, loamy stuff, then a few more rocks down the bottom. Then the added element, for a downhill bike at least, is the hike in the middle. So that’s interesting because you’re in a race run, walking, just trying to keep at the correct threshold of heart rate. I’ve just done two runs…so that’s a lot to learn. It’s hard to know how much to pace it all. And you can’t very well push yourself hard in the morning otherwise your race run’s going to be toast. It was a really fun challenge today. I enjoyed it. It’s awesome to come here. Obviously I’ve known about it for a long time. It’s quite a famous race, certainly within the industry. It’s a classic event.”

“It was really awesome watching everyone come to my home trail and get real scared,” said 22-year-old Golden Cycling Club rider Yannick Schulz (CAN). Like Dudar, he raced as a representative of the Golden Cycling Club and was the first to drop in in his category. He finished his day in 12th place. “I’m really happy to be a part of this. It’s sort of fulfilling a childhood dream.”

Next up, style will get a chance to shine at Crankworx B.C. which the CLIF Speed & Style Kicking Horse set to launch.