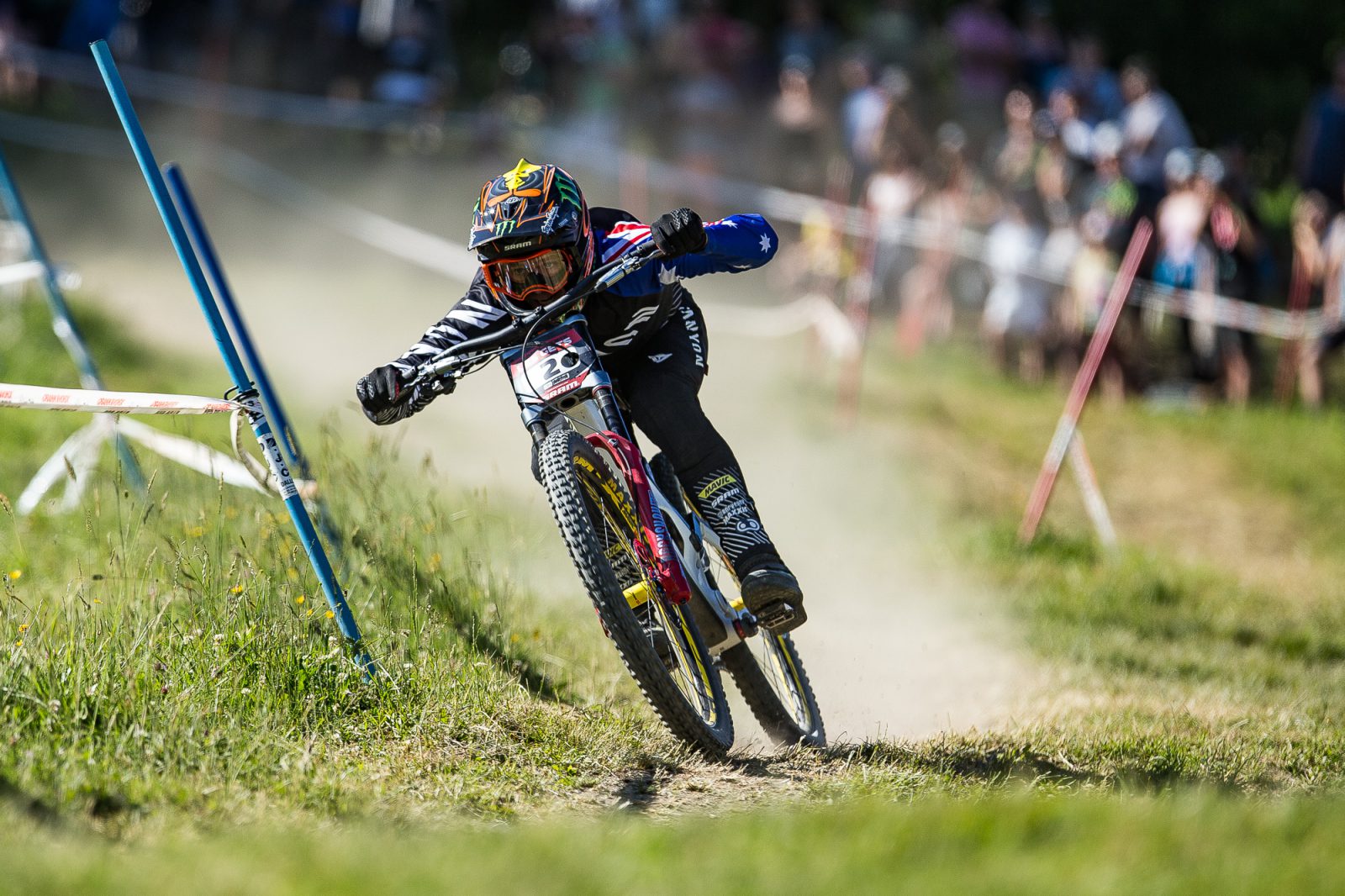 LES GETS, FRANCE June 23, 2018 – Dropping in last after French rider Amaury Pierron, who stormed the finish line amidst “maximum bruit” from the French crowd, Troy Brosnan (AUS) was tracking ahead, but nearly fell victim to the dusty, raw conditions on the iconic Crankworx Les Gets Downhill track.

“The top was super blown and you could see it when you went up the little chairlift. Towards the bottom I just opened it up and went as fast as I could and I had a real relaxed grip,” said the 24-year-old, who took the win in 2017. “I actually hit a big hole and my grip just blew off the bar, and I still kind of held the brake lever a little bit and kept it on, but it got loose and wild. It didn’t slow me down but I thought I was going to crash and hurt myself. So to get down and get the win, I’m super stoked.”

“He’s definitely the man to beat right now. To be right up there with him and then take the win, it’s really big confidence for me and something I’ll hold on to.”

Meanwhile, Pierron said second, his best result on the track to date, was still a sweet finish.

“The crowd was insane today. There are a lot of people. I didn’t expect that, so it’s super nice,” said the 22-year-old. “The track was super dusty. It was not easy, but I finished second, so it’s good.”

On the women’s side, French fans hoping to see a repeat win from Myriam “Pompon” Nicole (FRA) may not have got the result they wanted, but likely weren’t disappointed.

“I haven’t been here since 2004 as a first year Junior, you know, as a little kid,” said 30-year-old Atherton. “Coming back to this track is so much fun. It really, really is one of the best tracks we ride in the whole world.”

The renowned track, site of the 2004 World Champs, descends 554 over 2 kilometers, taking riders through natural turns and wide straightaways, described by announcer and former racer Andrew “Needles” Neethling as a track that “favours a rider who can stay off the breaks.”

And while Atherton said her race and her week have been incredibly fun, describing Crankworx as “100% awesome,” she says when it came time to race, it was all business.

“Me and Pompon and Tracey [Hannah] were all on our turbo trainers at the top, taking it really seriously…I was thinking ‘For sure it’s Pompon’s track,’” noting after the win that she was immediately switching her focus to another race coming up directly after. “I’m thinking about Dual Slalom later. I’m pretty tired, but Crankworx is so fun. I haven’t raced Crankworx for a few years, so I’m loving it.”

Third place behind Nicole went to Tracey Hannah (AUS), who crossed the line in 3:26.48, while the final podium spot in the Pro Men’s field went to Loris Vergier (FRA), who finished in 3:01.19.

Less than three hours later after her Downhill win, Atherton would clock another top time and celebrate a career first. The rescheduled 100% Dual Slalom Les Gets brought together a who’s who of the world best riders from a cross section of disciplines.

Atherton would face off against Jill Kintner (USA), who’s won the past six Crankworx Dual Slalom contests. In the final matchup, Kintner went down in the grass on one of the final gates, and Atherton took her second win in three hours.

“I’ve literally never won two races in the same day. It’s sick,” said Atherton. “I came in tonight just wanting to have a good time and enjoy the atmosphere and, now this.”

Of where she got the energy from, she laughed: “I had some muesli.”

Whether the men’s winner re-fuelled with cereal is an unknown, and while he didn’t win two golds, Bernard Kerr (GBR) still gave the Downhill everything he had, then dipped into his energy reserves enough to take the top step in tonight’s Dual Slalom contest.

“Slalom is the best event. We’re up on the hill, it’s sunny in France, then I got into the final with my teammate Eddie Masters, so I couldn’t have asked for a better day. And I ended up taking the win. Honestly, perfect day.”