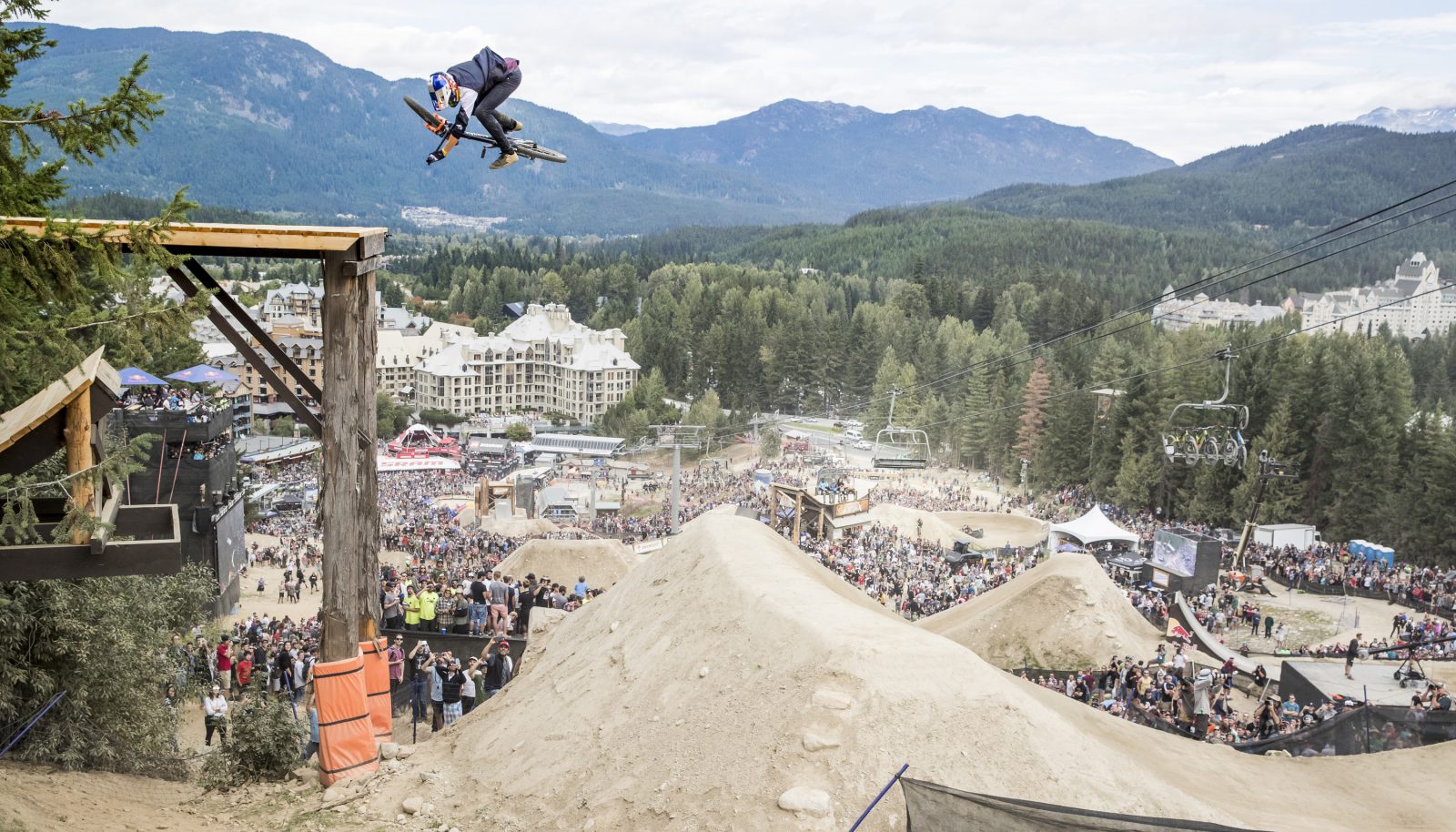 WHISTLER, BC – August 20, 2017 – The largest slopestyle mountain biking competiton in the world, Red Bull Joyride, closed out the final day Crankworx Whistler at Whistler Blackcomb today. Red Bull Joyride, known as the Mecca of slopestyle mountain biking, featured 18 of the world’s best slopestyle athletes in a gravity-defying showdown. The riders took to the sport’s biggest stage in front of 35,000 spectators packed into the Whistler Plaza for the season defining contest and a main event of the Red Bull Signature Series.

Often referred to as the “king of freeride mountain biking,” the Whistler native took the familiar first place position, making this his fifth Red Bull Joyride victory. Watch the winning run by Canadian Brandon Semenuk here. After competing in only one other Crankworx competition this year, he returned to the stage and landed a flawless first run that couldn’t be matched on one of the most technical courses ever.

“It was a bit of a surprise. I haven’t competed in five months so I came into this contest cold turkey, but I’m still riding just as hard no matter what,” explains Semenuk. “The course is so long and the wind always plays a factor so getting down the hill was half the battle. As you saw today there were a lot of crashes, so I was happy to make it to the bottom on my first run.”

With the maturing new talent of the sport, the preamble to this year’s Red Bull Joyride saw all eyes on reigning FMB World Champion Nicholi Rogatkin. Rogatkin needed to take the win in Whistler to secure back-to-back titles as Slopstyle World Tour Champion and to claim the first-ever Triple Crown of Slopestyle title. Wins at Crankworx Rotorua and Crankworx Innsbruck meant he had two of the three wins necessary to earn the title, with Red Bull Joyride being the final illusive win.  But with the immense pressure, he was unable to cobble together a winning run at Red Bull Joyride despite being an odds-on favorite for the win.

Hot on the heels of Semunuk was 18-year-old Emil Johansson (SWE) who placed second with a score of 86.80, and Ryan Nyquist who placed third scoring 84.80. After making a remarkable impression at Red Bull Joyride last year, Johansson has proved himself as a top contender all season long and finished taking the title of FMB World Champion. After only two years of competing, even Semenuk claims Johansson as the future of the sport. “He practiced harder than anyone,” says Semenuk. “Give him another year to fill out all his tricks, and he’s going to be unstoppable.”

After a breakout year and avoiding anything close a sophmore slump, Emil Johansson has lead to a new generation of surging slopestyle stars. Torquato Testa, Jakub Vencl and Nico Scholze have all impressed this season and continue to progress on the biggest stage of all at Red Bull Joyride. Slopestyle is on the verge of ushering in a new generation of stars on to its podiums and we wouldn’t put it past one of these three to return next year battling for podium positions. The contest also included legendary BMX rider Ryan Nyquist who took third position, one of a number of athletes from other bike disciplines who are making the transition to slopestyle mountain biking, further validating the sport’s growing appeal.

Built by riders for riders, this year’s Red Bull Joyride course was one of the most technical yet. Ringing in with 14 different features including an all new split start section with two options and the final feature with a 18 foot flatdrop into the finish area.

Check out the top winning runs from Red Bull Joyride. All videos are open for embedding.

For a full selection of images from Red Bull Joyride 2017 and VNR news cut, please visit Red Bull Content Pool.  All assets are available for direct download for editorial use.