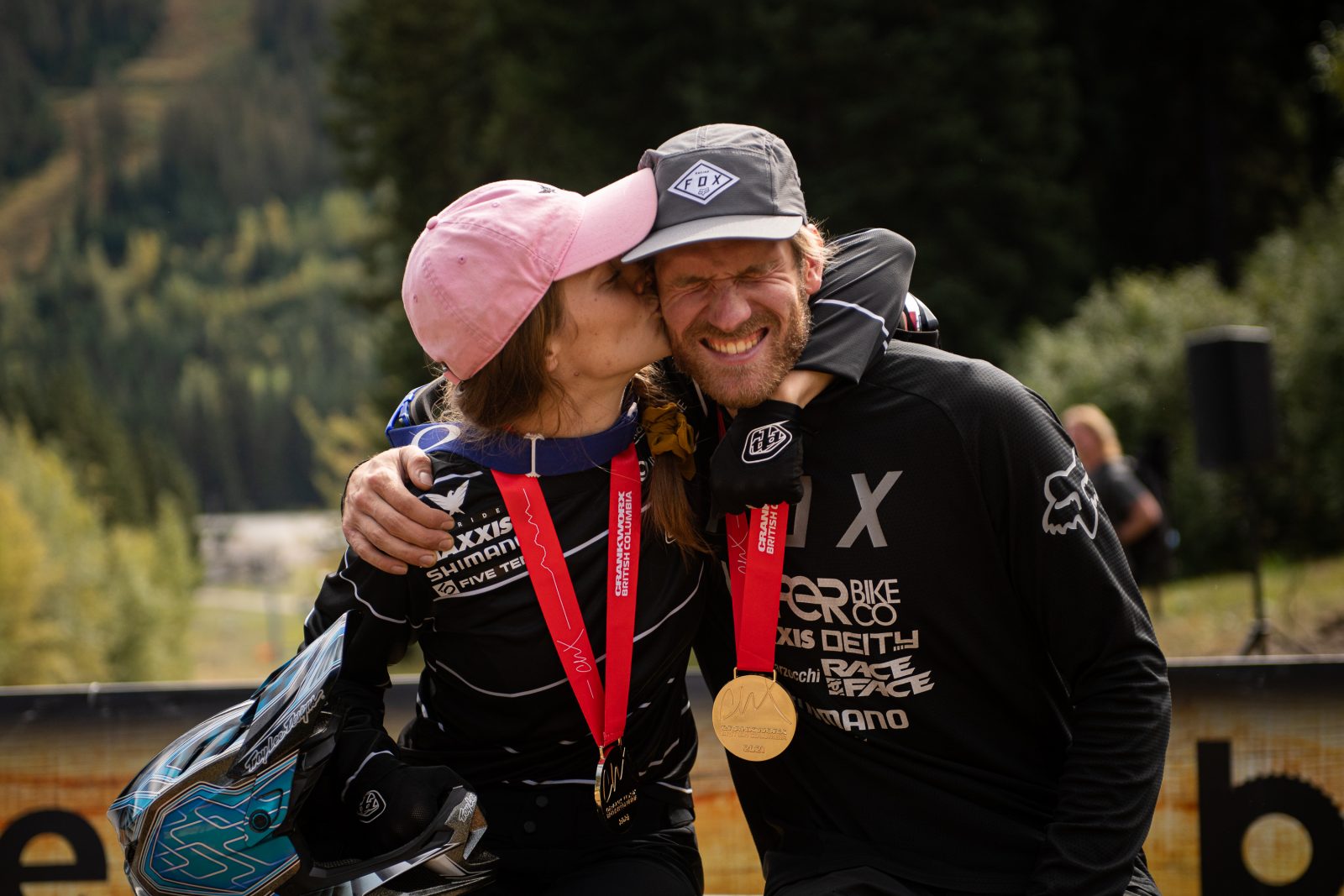 SUN PEAKS RESORT, BC, September 23, 2021 — The new Dual Slalom track in Sun Peaks has now officially been christened. It’s first champs have been crowned and the first drops of champagne have graced its finish corral (kidding, instead of champagne it was Whistler Brewing Trailforks ale, and everyone opted to save it to enjoy later rather than waste it on their competitors…except for Danielle Beecroft (AUS) who casually sipped hers while cruising back down the hill).

As the dust settled (kidding again, there was no dust, this is hero dirt) the story that emerged was one of long-awaited firsts, a special shared moment, classic Slalom randoms, and matchups that encapsulate the spirit of Crankworx.

Back to the top:

Van Steenbergen’s win came after an impeccable battle between he and Slavik, who is the event’s most recent winner in Innsbruck. The Canadian qualified first yesterday, while the Czech rider qualied second, so they were undeniably the fastest riders on track.

“I always just seem to make a mistake in the finals,” said van Steenbergen, who was clearly thrilled to finally clinch the top spot. “I have a lot of second places, but this is my first win. It feels really good.”

“It was amazing,” added Slavik of their matchup fighting for Gold. “Being in the final with Bas, it was always our sort of together dream. We’ve never been in the final together. So it was good to race against Bas. And you know, the finals were just crazy. We were completely over the limit. At the same time, we didn’t do any mistakes, so it was just super tight. Until the last meter no one knew who was going to take it, so Bas took it by a small margin. Gotta say, really stoked for him. Also really happy that we were in finals together, so it was already a sort of win for me. Happy with the second spot today.”

“I’m super happy to take the win,” said Verbeeck, who has two Dual Slalom golds to her name, from Rotorua and Innsbruck in 2019.  “I train but I’m not as prepared as I usually am, so I didn’t expect for it to go smoothly. Anything can happen especially if you don’t feel as prepared. It’s hard to have consistency. I’m thankful that all of these rounds were consistent for me. They weren’t extra strong, but they were consistent, and that was enough today to be tight but good.”

“We definitely do break down every skill, especially with slalom and flat cornering,” she added, of her and her partner’s attention to all the details and precise skills required for Dual Slalom racing. “So I’m happy with how we did on flat corners, which kind of saved my ass a couple times. So that worked out.”

“I did not expect it, that’s for sure, because I was on the downhill bike, but I’m stoked,” said Beecroft of her second place finish. “I just gave it hell and pedaled my ass off and it paid off.”

“It was a beast,” she laughed, addressing her chosen rig for the day.” It was so hard and so heavy to pedal, so it was so much effort. And pushing up the mountain too. I didn’t think about it. I just rode the bike like I was riding a bike, and it happened. The final was tight. I went off the track a bit, and so did Vaea. So it was tight racing, but I’m stoked to get second. I don’t actually have a bike. So I just ride my downhill.”

“If someone wants to give me a bike…” she added with a another laugh.

One step down, an epic matchup played out on the men’s/boy’s side that encapsulates both Crankworx and Dual Slalom, both of which bring together riders from different disciplines.

“He was six months old when I won a World Cup in Spain in Downhill,” said Hannah, the legend, of his race against young-gun Cruz. “To race against him is just incredible. It’s incredible to see the health of the sport. I love this sport. To be able to see how happy he is to be riding and joining with us is great. Before he knows he’ll be where I am. He’s got a lot of potential, and you can see that he just loves riding his bike. He’ll be around for a long time which will be fun to watch.”

Hannah has just come off his last World Cup DH race after announcing his retirement from that side of the sport.

“It’s an interesting feeling coming from last week. It was such a huge celebration. It was overwhelming…you never imagine that you can have that much influence on so many people. So that was really special. So coming here, it’s been hard to get in the mood to ride fast. That comedown…emotionally and all that. I just love being here at Crankworx with all my friends and such a high level of athletes.”

On the women’s side, Kialani Hines (USA) beat out Casey Brown (CAN) in the bronze-medal matchup.

“It feels good. All the girls were so fast. I qualified second, so I’m not totally happy with my runs but I’m happy that I got a podium spot. Qualifying was pretty wet and sloppy. A lot deeper ruts today, it was a lot dryer so everything is tacky and not so slick. But I think I was afraid to commit, because now it’s a little faster, and I was just used to sort of sliding around and being loose. But I think it ran a lot better today for racing. I love when it’s a fresh track. Even if it’s a bit wet, because it evens the playing field out, and also for us it gives us something new to ride. It’s more exciting racing and always great to learn on tracks like this.”

The course that challenged racers was 250 meters start to finish with six berms, one roller, one spine, and a series of grass turns. It was built for the event but will become a permanent part of the Sun Peaks Bike Park going forward.

Next up, riders are immediately heading up to the Air DH track for the second race of the day. It’s known as being a challenging six-minute long race run, sure to have these elite athletes pulling on all their energy reserves (+ CLIF bars and bloks) after a full morning and afternoon of Slalom racing. Highlights will be available after the race.