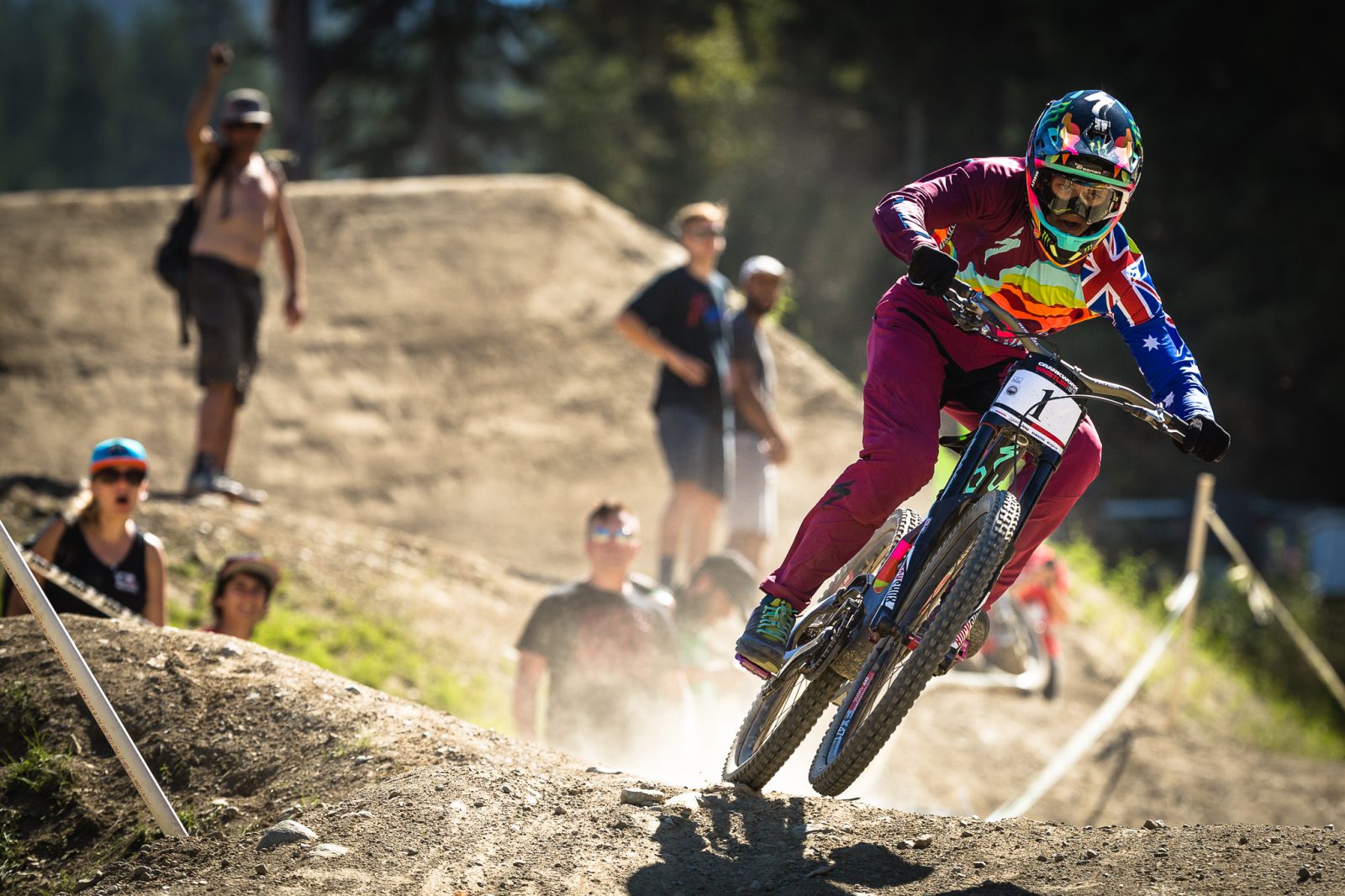 FOR IMMEDIATE RELEASE
Saturday, August 20, WHISTLER, BC — Troy Brosnan might be in the only athlete in Whistler this week who can claim his win is from a double hometown advantage—Adelaide Australia and Whistler, B.C.

Slamming down the Canadian Open DH presented by iXS in a stunning 2:43.45, three seconds ahead of his nearest competitor, he seemed to take what others were describing as a rough course, rutted by tires hitting the dust in the extreme heat of the last week in Whistler, like it was a walk in the park.

“The course is awesome. I guess some people would say it’s a bit blown out, but for me it’s perfect – just like back home in Australia. I’m from Adelaide Australia, but I actually lived in Whistler for about six months last summer; so you could kind of call this my second home,” he said.

He noted he suspected there were plenty of his Canadian friends lining the course, but it was a bit of a blur. Any athlete at Crankworx would say the Canadian Open is both a highlight of the week and one of the hardest events, as fellow Australian and first place finisher Tracey Hannah could attest. While the event was her best result of the week, it was also at the top of her agenda to fight for—and she went for it with great gusto.

“I had a really good race. The wind got up a bit, so that makes me a bit nervous on the jumps on the bottom; but it turned out alright and I just took the parts where I needed to be safe safe ,and went hard in other sections,” she said.

Standing on the sidelines, Czech athlete Tomas Slavik anxiously awaited the results of the day as New Zealand’s Sam Blenkinsop had the opportunity to beat him in the season-long, all-round points competition to win the King of Crankworx if he did well in the event. The honour was Slavik’s focus all year and, with the highest prize money in mountain biking, at $25,000, a serious boost for any racer’s next season.

“The last 24 hours have just been like a never ending story. It was scary, you know; this is just a big gamble,” he said, from a hut in the finish corral.

He was not racing in the event and Blenkinsop only needed a fourth place finish to take the Crown. When he slipped from within the top five, Slavik’s smile shone almost as bright as the blazing sun.

“Now I’ve calmed down I’m just enjoying being King of Crankworx. It’s so sick. It’s not easy to be a racer. We always have a lot of races, a lot of trails, and it’s hard to be consistent. So I’m happy that it worked out,” he said, noting he wanted to thank his friends, family and sponsors for their support.

Australian Jack Moir, meanwhile, had quite the race, waiting out over 20 athletes finishes as the man in top spot before losing out to Brosnan on the final run. He nevertheless won the Crankworx DH World Championships, earning himself a bonus $5000 he actually had no idea was on the line.

“My year just started out pretty bad. I had a bit of an ongoing injury from a broken collar bone last year that flared up a bit when I was at training camp in Cali(fornia). So I missed the first World Cup, missed Crankworx in Rotorua, but made it to Les Get and still somehow won the series.

Moir placed third at Crankworx Les Gets and second in the Canadian Open DH presented by iXS and said that while Crankworx is on the top of his list, the opportunity to win the series had completely escaped his attention.

The Canadian Open DH presented by iXS was Saturday’s live broadcast and was shown on Crankworx.com and Pinkbike.com. Seven events in the 10-day festival are broadcast live, and later repackaged into extreme sports shows.

The marquee event for the 10-day Crankworx festival and the biggest single event of the Crankworx World Tour runs tomorrow: Red Bull Joyride. This is a Slopestyle competition, which sees the athletes perform an aerial show, jumping off a string of wooden features before a crowd of 30,000-plus fans.

All three stops of the Crankworx World Tour are broadcast on Crankworx.com, Pinkbike.com and the Slopestyle competition, Red Bull Joyride, is broadcast exclusively on Red Bull TV. The final broadcast runs:

Results for the Canadian Open DH presented by iXS:

Photo captions:
1. Troy Brosnan pulls in for the win in the Canadian Open DH presented by iXS at Crankworx Whistler in one of the biggest events of the 10-day Crankworx festival.