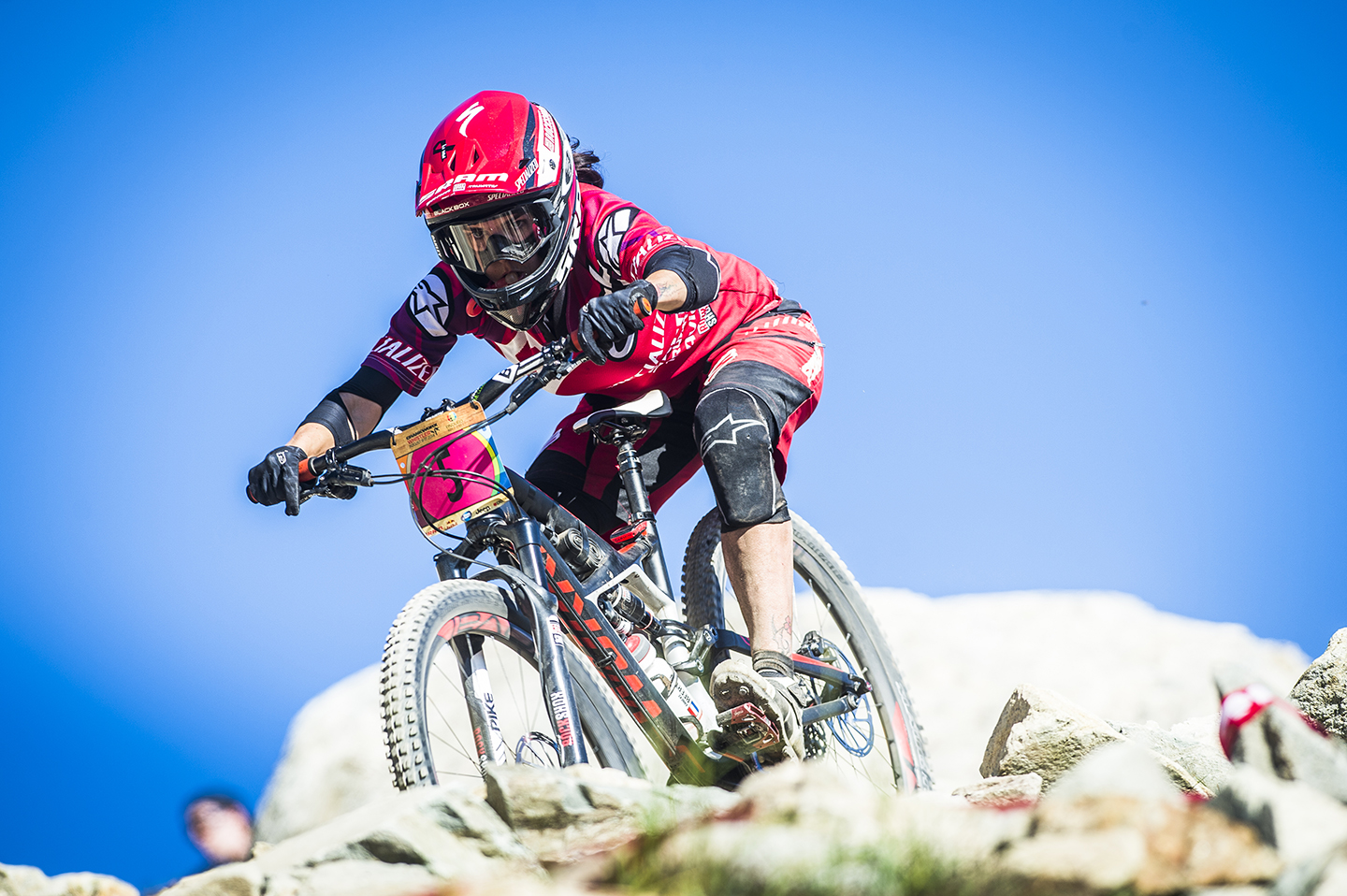 July 2, 2015 Whistler, B.C. — She’s in the lead to become the first Queen of the Crankworx World Tour and now Anneke Beerten is rallying the troops to dominate in Les 2 Alpes.

Last week, the Crankworx World Tour named Beerten team captain for its France vs. The World competition and the enduro star has now completed the complicated task of choosing her team for this friendly battle, navigating possible options to select a male and female rider from every discipline, without hitting the same country twice.

“It was hard to pick out of so many amazing athletes, but I think we got a pretty fast world team,” says Beerten, the Rotorua Pump Track Challenge presented by RockShox champion.

A former BMX and Fourcross star, the Dutchwoman embodies the Queen of the Crankworx World Tour concept as a well-rounded athlete who can hold her own in any discipline. Now she will prove just how well she knows the intricacies of the competitive mountain biking world by selecting the strongest team out of the rich field of athletes expected for Les 2 Alpes.

“We all know the Frenchies are damn fast in all kinds of cycling disciplines, but I think the world team will be hard to beat with athletes like Rachel Atherton, who is always so consistent, Cam Zink, who is all about style and speed and Marcelo Gutierrez, who is absolutely on fire this season,” says Beerten.

Stacking the deck with a string of American, Canadian or British riders, the countries with the strongest contingent of mountain bikers, was out of the question as France vs. The Worldcame with strict guidelines. Beerten had to choose a team consisting of a male and female rider from each discipline, wherever possible, and every ridera was required to be from a different country.

Joining herself on Pump Track, she has thus pulled in Matt Walker of New Zealand. A solid DH rider, Walker placed second on the pump track in Les 2 Alpes last year and made his Crankworx debut in the discipline in 2012, hitting the podium right out of the gate. He’s given his team’s chances good odds.

“The French will always be tough competition across all disciplines, so they will definitely be hard to beat; but I think the world team will put up a good fight and it will come down to the wire with the world team coming out on top,” says Walker.

The obvious choice for any downhill competition, Rachel Atherton, who won the Crankworx Les 2 Alpes Downhill presented by iXS – European Downhill Cup twice before France’s Myriam Nicole locked it down last year, also made the cut. The selection was a difficult choice for Beerten as it eliminated a string of strong British riders from the realm of possibility, like Slopestyle stars Sam Reynolds, Sam Pilgrim and Bernard Kerr, not to mention Atherton’s brother, DH rider Gee Atherton.

Her male selection for downhill was easier. In picking Marcelo Gutierrez, of Columbia, she has snagged the reigning King of Crankworx Whistler and an all-round DH star. Her other South American choice, Bernardo Cruz of Brazil, was an equally safe pick. In addition to winning the 2013 Official World Whip-Off Championships in Whistler to become World Whip-Off Champion, his country of origin, Brazil, kept the door open to use athletes from more dominant mountain biking countries in the D.S.&S. and Slopestyle.

Beerten then opted to use her American and Canadian picks in the same discipline. Sharpening her pencil, she chartered a path to Cam Zink and Tom van Steenbergen. Zink is a D.S.&S. master, if not the D.S.&S. master. Until Crankworx Rotorua, there had never been a D.S.&S. competition where he wasn’t in the finals.

“I think this is an honour and I can’t thank Anneke enough for picking me. I’m going to do everything I can to represent the world but, most of all, the USA,” said Zink upon learning he had been chosen.

For his part, van Steenbergen has also done well in D.S.&S. Though he’s known for making his mark in big air competitions, like his attempt to front-flip the 72-foot gap at Red Bull Rampage, he has made it to the finals in the discipline and should prove a strong contender.

Her final selections for Team World are Belgium’s Thomas Genon and Czech rider Tomas Zejda, represent a yin and yang in Slopestyle. An up-and-comer on the gravity scene, Zejda appears poised for a breakthrough this year, with a hefty bag of tricks and a keen eye on the prize, while Genon is a consistent podium finisher whose breakout move was a 2013 Red Bull Joyride win at Crankworx Whistler.


VIP packages to catch all the Crankworx Les 2 Alpes action are still available. Priced from 110€ per person, a three-day VIP access gets fans a front-row seat to watch in style, enjoying drinks and appies, three nights of accommodation and a three-day pass for mountain biking.