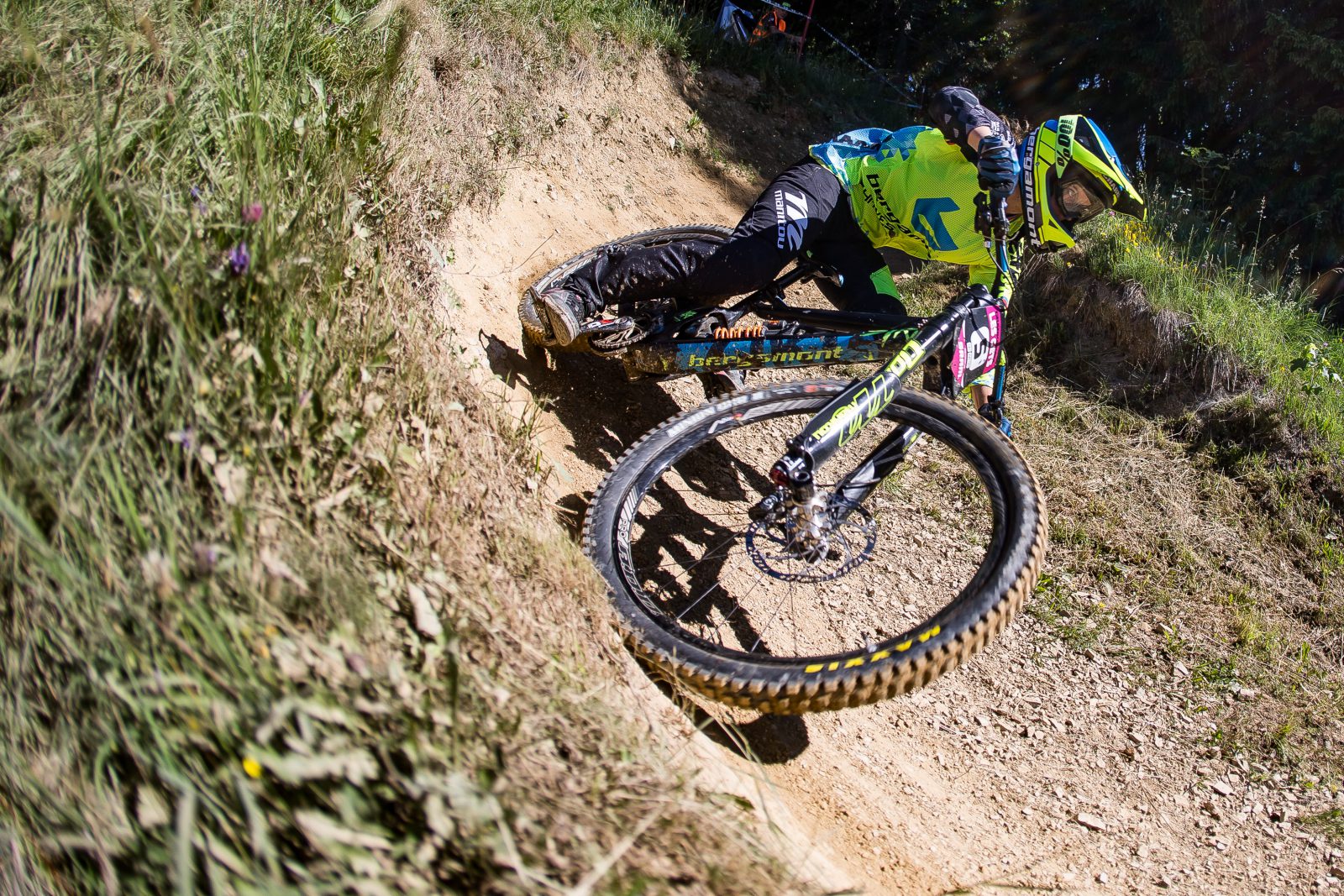 Ironically, the pair could not have more far-removed styles. Brown concentrates Crankworx, is the master of the whip-off and known for her big air flare in the bike park, whereas Siegenthaler is a technical rider straight out of the World Cup circuit.

“We don’t get to see each other very often…and she’s a really special, and quite unique rider, so I’m really honour to be on the second step with her,” said Siegenthaler. Neither have ever tied in a race.

The course they matched on opened straight into the woods where riders had to pick their way through the moss and loam until an exposed track surfaced, leaving an unusual amount of slippery roots for a discipline generally design for speed and air. From the technical section, riders went into a long stretch of bike park-style turns and jumps with a few very tight corners, challenging even the best in the field.

“Going into the bike park section, it’s a huge corner and I was very close to coming off my bike,” said Brown. “It was full drift off the back tire, out of control, and I had to put my foot down at a pretty high speed. But I got it together and just pedalled my ass off to try and make up some time.”

Stiff setups, with a bit of extra torque on the suspension, were the order of the day and Morgane Charre (FRA), 2012 World Champion, nailed her setup.

“I like it when it’s not so fast and it’s more technical, so did well in the woods and then, at the bottom, I just tried to pedal hard,” she said.

Without the focus on jumps, reigning Queen of Crankworx Jill Kintner (USA), who traditionally podiums, and usually wins the Air DH, missed the podium—though only by 0.00.04.

And the roots did claim a victim. Inaugural King of Crankworx Bernard Kerr left the course in a sling, delaying the conclusion by 15 minutes, and leaving the eventual first and second place winners Jack Moir (AUS) and Greg Minnaar (RSA) to wait for their big moment.

Moir won the Crankworx Rotorua Downhill presented by iXS in March and is the reigning Crankworx Downhill World Tour Champion.

“I think yesterday was more of a proper downhill track, wide open and a bit rough, and I got a bit smoked yesterday. So I had to get some redemption,” said Moir.

Minnaar, whose 70-plus podiums have earned him enough star power to attract a throng of followers at the base of every race, described his run as a smooth, if safe effort.

“It’s a tough race. I thought it would be more like a trail like a bike park, but there were some tight pieces, so working your way down and trying to go fast is kind of scary; but also good fun at the same time,” said Minnaar, who said he had a smooth, safe run.