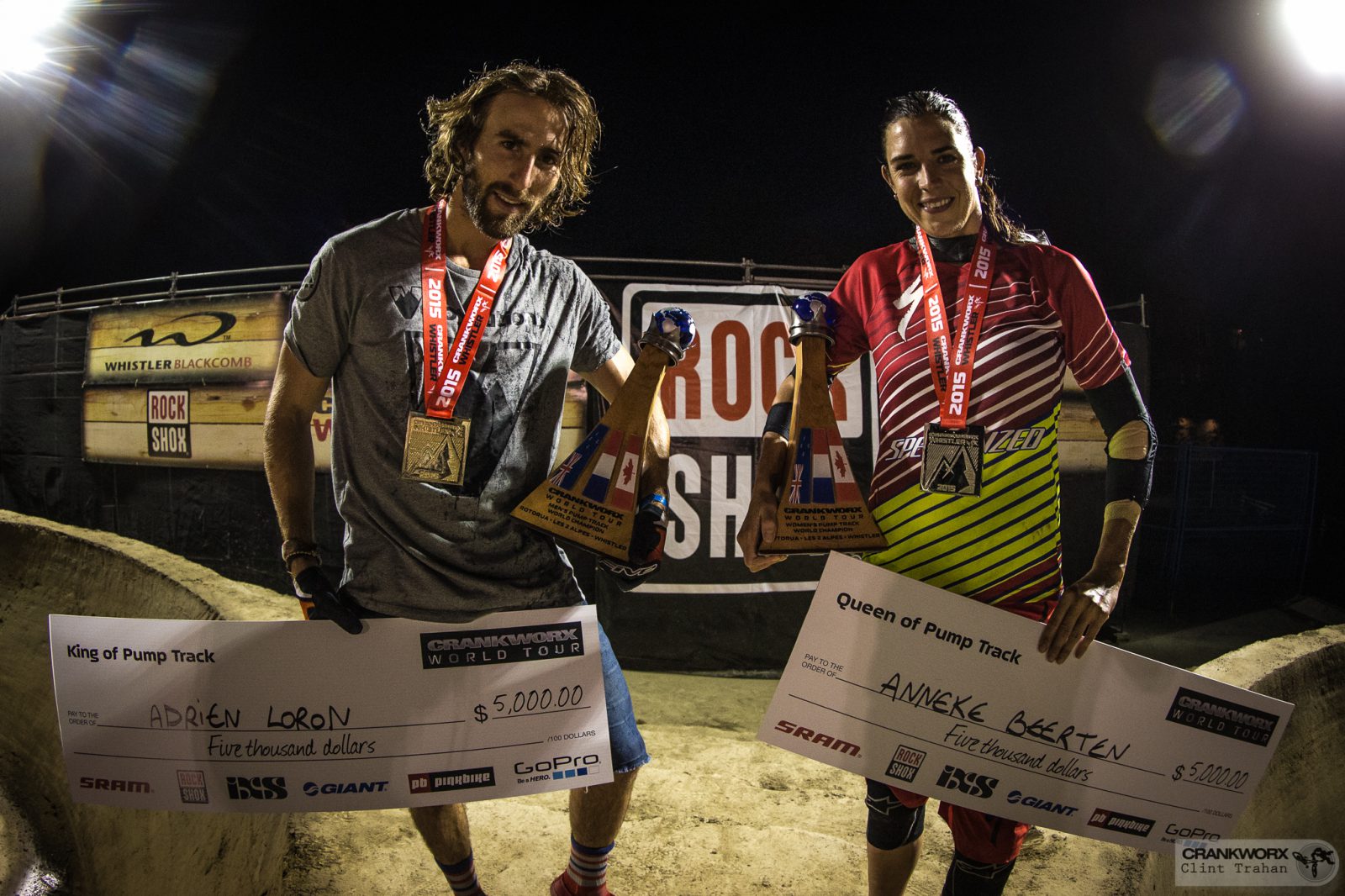 August 13, 2015 Whistler, B.C. – The Crankworx Whistler Pump Track saw a serious battle Thursday evening with Adrien LORON (FRA) coming in, game face on, to carve out a name for himself as the first Pump Track Series winner.

Loron and Joost WICHMAN (NED), the Pump Track Champion from Crankworx Rotorua, went head to head in the quarter finals, eliminating Wichman, one of the top three Pump Track competitors in the world, by mere millimetres well before the end of the night, and leaving Loron to face a Crankworx legend.

Paul BASAGOITIA (USA) is credited with launching such a slick line of tricks off the Slopestyle course in 2005—wearing only a half lid helmet and jeans—that he literally put the sport, and the event, on the map. Returning to the pump track podium, he was ecstatic with the results of the night.

“It feels amazing,” said Basagoitia. “I’m pretty excited to be back on the podium. Different discipline, so it’s good to know that I could maybe have another ten years in something else.”

The women’s final saw Beerten and Kintner in a battle of wills. Working with two sets of stitches from the Official World Whip-Off Championships earlier in the day, Beerten fought hard to take silver, which placed her in the first spot as the Pump Track Challenge Series winner.

“Right now everything is numb, but I think tonight and tomorrow I’ll be pretty sore,” she said, lifting a corner of her shirt to show the wide swath of bandages concealing her wounds.

Beerten will be back to race the Dual Slalom Friday as she makes her way toward Queen of the Crankworx World Tour.

OFFICIAL WHIP-OFF WORLD CHAMPIONSHIPS PRESENTED BY SPANK – The top 20 riders in the finals, down from 120, absolutely threw down on Crabapple Hits early Thursday afternoon. Casey BROWN (CAN) and Andreu LACONDEGUY (ESP) were named the 2015 Official Whip-Off World Champions, making Brown the owner of the women’s division.

Judge Duncan Riffle said competitors are judged on how far they whip it, how in control they can keep it, how big they go, and their overall fluidity.

“We had the biggest showing of talent we’ve ever seen. It was so difficult to narrow it down to the top five,” said Riffle. “Overall, the whip is about aesthetics. It all comes down to how cool it looks. Whips feel amazing to execute and they look even cooler. It’s poetry in the air. I love the whip.”

First-time champion, Lacondeguy, was giving it everything he had.

“I’m stoked! I’ve never won a whip-off before and I was just whipping it as hard as I could,” says Lacondeguy. “I saved it all for the end and whipped my biggest whip on my final run.”

Red Bull Joyride trail builder, Dustin GILDING (CAN), sent the crowd into a frenzy by whip-bonking a “my mom whips better than you” sign twice, and received an honourable mention.

Brown showed up to defend her title as World Champion, after winning in Crankworx Rotorua, by beating out some tough competition. The commentators remarked that Brown whipped so hard she was almost indistinguishable from the guys out on the course.

Thursday evening concluded with Laurence Crossman-Emms being awarded the first ever Viewer’s Choice category in the Deep Summer Photo Challenge. He won handily with 67% of the vote.

Tomorrow.. The 2015 Canada Cup series X-Country Final tests riders with a fast and challenging course. The race takes place from 1:15pm–3:15pm. Later, It’s the GIANT Dual Slalom from 5-7 p.m. pitting riders against each other and the hands of the clock in a side-by-side battle.