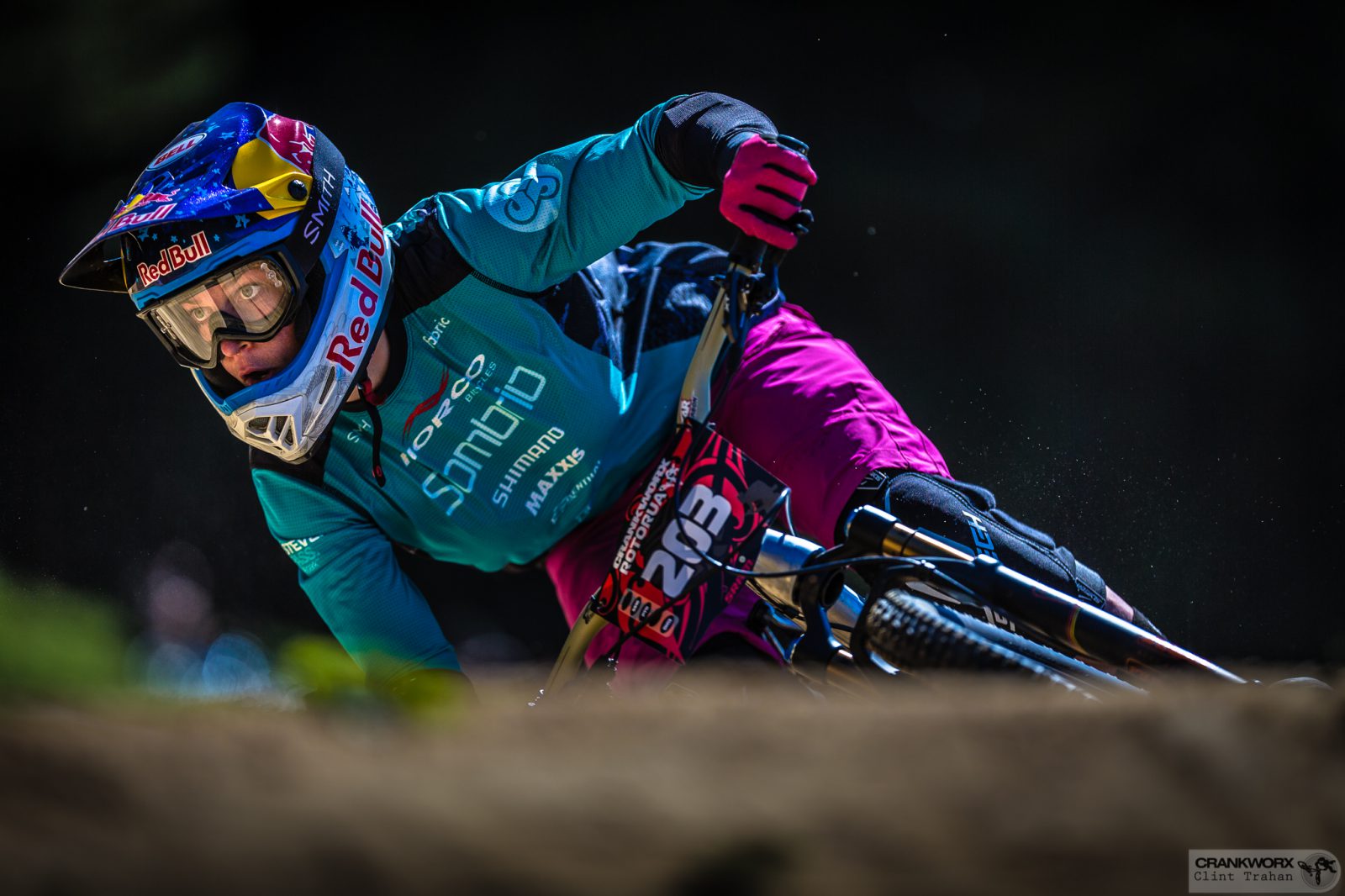 CAN ANY WOMAN DETHRONE QUEEN KINTNER?

FOR IMMEDIATE RELEASE
WHISTLER, B.C., Wednesday, March 1, 2017—Bearing down on the final month of training before Crankworx Rotorua opens the 2017 World Tour, the competition is stacking up as the toughest to date.

The season-long race for King or Queen of Crankworx is the ultimate skills and endurance omnium for gravity mountain biking.

“It really does take a multi-talented super woman to be the last one standing at the coronation. Multiple disciplines means multiple bikes, switching mental focus, juggling practice times, food, competition— it gets hectic,” says Darren Kinnaird, Crankworx General Manager. “Certainly, there’s a measure of gutting it out, but this is a competition which really takes talent, precision and maturity to win. You’ve got to know when and where to pour on the gas.”

Jill Kintner (USA) proved the picture of this dominant force in 2016. Kintner won more competitions than any athlete on the Crankworx World Tour—male or female—amassing a total of 1380 points, over 11 different competitions, and sweeping the pump track and dual slalom events, at all three World Tour stops, and in addition to winning some of the biggest events, like the Crankworx Rotorua DH presented by iXS.

Yet 2017 is a new chapter, with new challengers to the throne.

“Everyone at this level is fast and talented, so I wouldn’t want to underestimate anyone,” says Queen Kintner, who is fully prepared to defend her title to the end.

Her biggest threat will likely come from 2015 Queen of Crankworx, Anneke Beerten (NED), who battled an immune disorder for virtually all of 2016, still managing to win the Giant Toa Enduro in Rotorua and podium multiple times in both pump track and dual slalom.

Beerten’s true advantage is always in the enduro events, however, and with two Enduro World Series rounds a part of the Crankworx World Tour this year, a healthy Beerten should really clean up.

“Last year did not go as planned. Getting sick early in the season was the hardest thing ever. Missing races, feeling miserable, lots of doctor’s appointments and not being able to ride was really hard,” says Beerten. “I took a big break after the season, did not do any activities whatsoever. I was a proper couch potato!

“I’m all healthy and good now, excited about the new season that is coming up. For now, my focus will be on the Enduro World Series races. After Rotorua, I will decide if I will be competing at the Crankworx events in Europe—but I will give it my all in Rotorua.”

Caroline Buchanan (AUS), meanwhile, will be returning to Crankworx for the first time since her 2014 Ultimate Pump Track Challenge presented by RockShox win in Whistler, and could prove a serious contender. The three-time BMX World Champion was focused on the Rio Olympic BMX competition in 2016, but has been riding the big bike of late, with much success. Snagging a fourcross World Champs win late in 2016, she also recently claimed a win over Beerten at a round of the Fontana Winter Series.

Buchanan has always been a threat on the finesse bikes, including multiple Crankworx podiums in pump track and dual slalom in 2013 and 2014. After spending the offseason focusing on mountain biking, adding a Queen’s scepter to her impressive trophy collection isn’t out of the realm of possibility—unless another top talent, like Casey Brown (CAN), beats her to it.

Last year Brown finished second only to Kintner, and continued her streak as the absolute maestro of the whip. Unfortunately for Brown, while she remains undefeated in the whip-off, though a change up in rules has left it out of the list of events riders can use to accumulate points.

“My strategy going into the Crankworx series this year will be the same as it always has: keep it low pressure and have the most fun,” says Brown. “I’ve never had the same competitive drive as the athletes I race with—I’m feeling really good coming into the season and I’m ready to be back on my bike.”

It’s an attitude which is winning her a lot of results. Last season she podiumed multiple times in the Enduro World Series and never finished lower than sixth place, giving her a similar advantage to Beerten, although Brown has a similarly impressive track record in the Crankworx downhill events too.

If there is one guarantee in a season-long race, it is that anything can happen.  Australia’s Tracey Hannah, who podiumed at every Crankworx World Tour downhill event in 2016, and Canadian Miranda Miller, who launches her first year on a full factory ride, healthy, strong and competitive and well-focused on both downhill and enduro, could prove breakout contenders.

New for 2017, Air DH races in both Rotorua and Les Gets, will give downhill specialists two fast and furious rips like the  Fox Air DH, in Whistler, to collect some points, and the fourth round of competition in Innsbruck Austria, will certainly take this season into the next dimension.

Crankworx Rotorua runs March 25 – April 2, and will be broadcast live, all season long, on Crankworx.com and Pinkbike.com.

Image cutline: Reigning Queen of Crankworx, Jill Kintner, rounds a berm. Her dominant sport is Dual Slalom, a discipline she describes as exhibiting universal skills with the most disciplines of riders competing: downhillers, slopestyle stars, pump track and fourcross specialists.