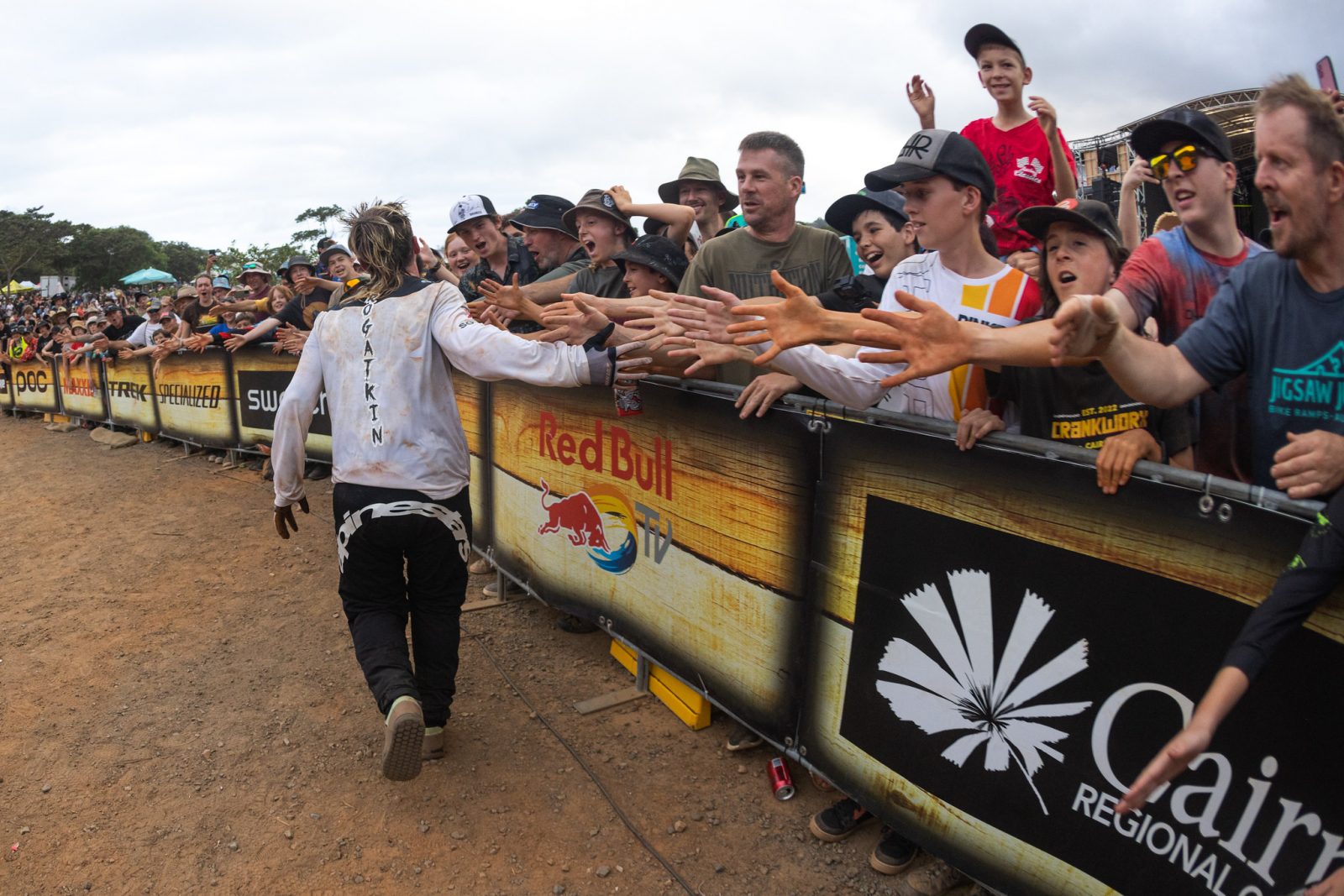 CAIRNS, AUSTRALIA, October 8, 2022 – The humidity was thick and the crowd teeming with anticipation as 14 of the top Slopestyle riders in the world brought the heat, energy, action, and hype to match in today’s Crankworx Cairns Slopestyle.

Playing host to the third Crankworx FMBA Slopestyle World Championship contest of the season, the sunburnt Australian dirt saw moments so tense and enveloped in silence you could hear a pin drop, and moments so explosive they were nearly deafening.

After first runs, Erik Fedko sat in first. Nicholi Rogatkin, who had said he was seeking redemption in Cairns, was sitting in second. And Emil Johansson, on an eight Crankworx contest winning streak, had been escorted off the course by the medical team after going down on the final feature.

The intensity of the rumble in the rainforest was real.

Second runs, with only two left to drop, Rogatkin made a move. Fedko pushed to counter, but it was not to be.

Four years since his last Crankworx win, the American rider charged his way to the top once again, amidst the thunder of thousands of fans.

“Me and Australia have just been a match made in heaven. I live off the crowd so much,” said 26-year-old Rogatkin. “Up there, quiet, in the zone, but I’m like ‘I gotta get down there, I gotta experience that hype, I gotta give those fans what they want to see.’ That’s why I was kind of bummed after the first run. I got a little tripped out by seeing a bunch of the guys mess up their runs. So I kept it really safe. But in the second runs I was like ‘I’ve got nothing to lose, if I want to win this event, I’ve got to get this done.’ So, I’m so stoked that the run worked out. It’s insane to be back on top, and in Australia. I couldn’t ask for a better day.”

“I had a pretty heavy start to the run,” he said, describing the kickoff to his second. “It’s one of those features that you can jump the whole thing. Jumping the whole thing wasn’t enough, ‘cause there was a bunch of us doing it, so I had to really step it up. Cashroll over the first feature. Probably the scariest move of my whole run, so starting it out with a bang. It’s good because as soon as I land that, I’m like, ‘I’m on.’ Ripped the berm, into the next jump, Twister, a trick that I’m pretty confident in. Then we go to that new, unique feature, a little bit technical, a little bit of a skate park vibe. I still kept it a bit safe. Barspin on, a little foot jam on top. Barspin off. I wanted to double Tailwhip the quarter, but I just did a single Tailwhip because these runs are so tiring, so I thought ‘I’m going to keep it with a trick that’s a little bit less aggressive here.’ Then I had a little bit of a moto, freestyle trick with the Superman Seat Grab One-Hander, a trick that I really like doing into this whale tail. I did a Tuck No-Hander out of the shark fin, which I missed in my first run, which I was so pissed about. Then we come into the dirt pipe, which is a completely new feature that we’ve never seen before. It’s techy, it’s windy, it’s massive, it’s tough to keep the speed. Big Double Downside Tailwhip in, land it, you’ve got to keep the speed. I did a Hip Flip on the next one. And then just juicing all the speed I can get in that shark fin, pumping, pedalling, I’m completely exhausted, into this Cashy Whip on the last jump. I went off it and I thought ‘I don’t think I have enough.’ I put all my willpower to get around and land it, and then a bunch of the boys were just going crazy for me here at the bottom. I just went mental. That moment will just always stay with me. It’s a long time since tasting the top step.”

“Landing that first run felt amazing,” said Fedko of his 92.75 scoring run. “I ended up first after the first runs, so I was hyped.”

“I was pushing,” he said of his mindset as the last rider to drop in the second runs. “I saw Nicholi, and he was dialled. I knew he was going to land the run. I knew because he looked really good in practice. So I was like ‘Ok, let’s get ready. Let’s get ready.’ I never push in second runs. I always have my first run dialled and then I’m stoked for the podium, but this time I was hungry, and I went for it.”

Rogatkin’s second run had scored him a 94.75, so that was the one to beat.

“But you can’t always make it to the bottom,” explained Fedko. “I blew up my back wheel on the step up, so it didn’t work out, but I’m stoked to be here right now. Stoked to be healthy. We all had an insane week.”

The German finished with: “Next contest, I’m hungry for the win.”

Another rider who pushed hard through the second runs was a rider who, like Rogatkin, has been fighting his way back up. Max Fredriksson’s last Crankworx podium was a third-place finish at Red Bull Joyride in 2016.

“It’s indescribable,” said the Swedish rider of the energy of the day. “It was a scary contest. It was hard conditions, but we all just fought through as good as we could. I’m just happy that I came out with what I did.”

“The energy here in Australia is literally one of the best ones we’ve ever had,” he added. “The fans are amazing. I didn’t think this many people would show up for the first edition, but they showed up, that’s for sure. I’m just super happy to be back on the podium again after tons of injuries and other hassles. Feels good.”

Noticeably absent from the second runs, the man who through the past eight Crankworx contests has been the one to beat. Emil Johansson missed his second run after the injury he sustained in his first. After hitting his head, he was examined by Crankworx medical staff. It was deemed, due to the nature of his injury, that he would not be able to safely take a second run.

Among such a tight knit group of competitors, the highs are seemingly shared by all, as are the lows.

“Deep down we want to beat each other so bad,” explained Rogatkin. “Everyone wants a podium spot, a first-place spot. But at the bottom, at the top, everyone’s just celebrating for each other and hyped for each other. Emil goes down and we’re all so concerned. It’s graphic stuff for us to see. I think we’ve developed such a bond, because this is such a unique atmosphere and sport to be in, that that bond can’t be broken. We understand each other so much.”

The course that challenged riders today is one that judges had said was one of the hardest courses they’ve ever had to judge.

It included 10 features with 13 opportunities for tricks.

One contest remains for riders this season next month at Crankworx Rotorua.

Looking even further ahead, officials today announced the dates for Crankworx Cairns 2023. The festival shifts to May next year, running May 17 to 21, making it the second stop of the Crankworx World Tour, following Rotorua in March. Early-bird tickets are available HERE. The full Crankworx World Tour schedule is expected to be announced in December.

Meantime, one more event to go for this year’s shenanigans and competition in Australia. Tomorrow, it’s all about the Specialized Dual Slalom Cairns as the final pieces of hardware are doled out at the inaugural festival, as well as the final points at this festival for 2023’s titles of the King and Queen of Crankworx.