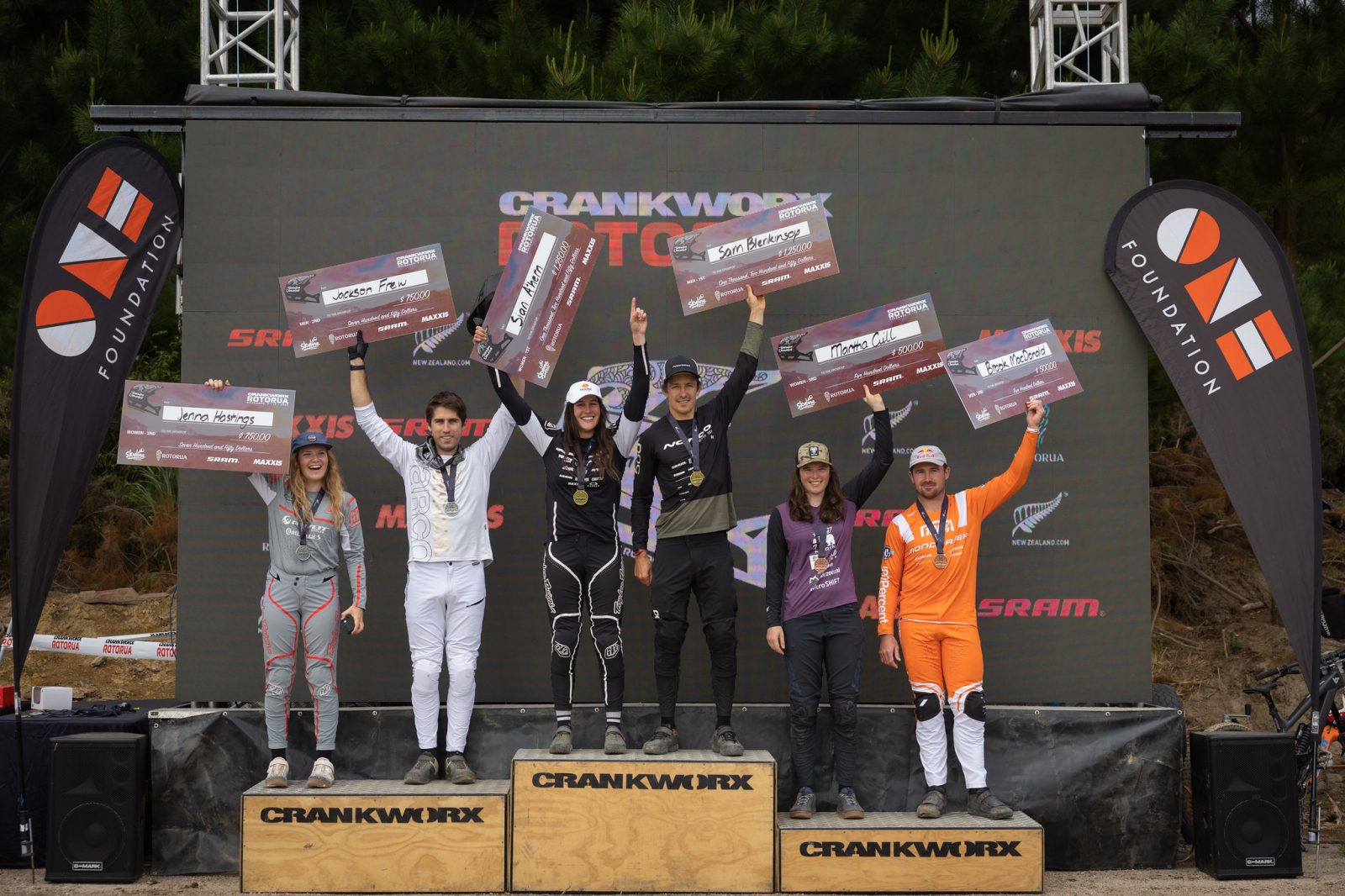 ROTORUA, NEW ZEALAND November 6, 2022 — An iconic track, real fruit ice cream, trail doggos, good vibes, and real quick humans all came together today to kick off Crankworx Rotorua 2022, reminding the world of one thing that’s abundantly clear: New Zealand knows how to set a vibe to race some bikes. This was classic Rotorua racing, with some of the world’s best lining up at the start gate to take on the Kiwi locals.

The Crankworx Rotorua Taniwha Downhill track (described by Crankworx DH Manager Dave Hamilton as “well known in NZ as the OG!”) welcomed 184 racers, pro and amateur, to the Whakarewarewa Forest.

With rain soaking the trails midweek, followed by sunshine through training, conditions were constantly evolving. Alongside it, riders’ paces steadily increased with each lap bringing more confidence and grip.

“Obviously it’s awesome to win and to win by a pretty good margin. I feel good. It’s just good to be back home in New Zealand and riding Rotorua. I’ve grown up racing here. This was my first Nationals race, racing here and did well, so it’s always cool to come race in Rotorua. The dirt’s amazing, you just have fun riding your bike.”

“The track is awesome, it flows really nice. It was a fun race for me. I’m happy.”

“I think anyone that comes to Rotorua has a good time riding. It was kind of cool how the format was, we had lots of time this morning. So I was out on my e-bike, riding all the trails. Every time I come here there are so many new trails. We’re pretty lucky here in Rotorua, and everywhere in New Zealand now. Just how the trails are evolving.  It’s awesome. And like I said, it’s cool to win.”

“It’s awesome to see all the fans here, and with the screen at the bottom. And if you were at the bottom, you probably didn’t see how many people were actually up on the track. Because everyone’s trail riding and it’s the weekend, there were people on their bikes on the side of the track watching. It was probably the biggest amount of people I’ve seen out watching in the Redwoods. It was pretty awesome.”

“I’m so pumped to get a win, and first time here in New Zealand. I’m really excited to race this track for the first time and experience what New Zealand has to offer.”

“It means a lot. Jenna was pushing the pace yesterday. To pull five seconds ahead today was like: ‘What just happened?!’ Mind blown. I’m so pumped. It’s always great to win, but to win and beat some of the locals is insane, especially when Jenna’s so quick.”

“So far Rotorua has been amazing. All the tourism stuff that it has to offer has been a huge bonus. Not just going to a location and just riding. Sometimes that’s sick, but it’s been really cool, I did the canopy tour and I’ve got rafting tomorrow. Some spas and stuff. All these cool things. It’s such a cool place. Then the actual trails themselves, they’re nothing like I’m used to at home. I’ve never actually ridden anything like this before. The conditions were so cool and something that I really enjoyed getting used to and learning. Sliding around in the mud on the first day was pretty fun, and just how the whole track changed so much. I love having to adapt to that. And try and get faster and faster as the weekend goes on.”

Standings – King and Queen of Crankworx

As the final of four Crankworx World Tour stops, Crankworx’s top all-round athletes are in hot pursuit of King and Queen points at Crankworx Rotorua.

Blenki’s win today pushes him up to fourth in the overall standings, while Jackson Frew’s second place finish pushes him into third. Bas van Steenbergen finished his day in sixth, which adds to his points stash as he sits at the pointy end in first.

The women’s results don’t shuffle, but tighten up, with the top three remaining the same. Jordy Scott sits in first, one point ahead of Vaea Verbeeck, and Caroline Buchanan close behind in third. Scott finished eighth today, Verbeeck fifth, and Buchanan 10th.

Following the race, athletes and organizers were invited to attend a pōhiri (traditional welcome) at Te Puia, home to the New Zealand Māori Arts and Crafts Institute. The venue sits in a geothermal valley which includes the Southern Hemisphere’s largest active geyser, Pōhutu.

With the ceremony wrapped and a big day of racing under riders’ belts, “Tere Panuku” can well and truly be considered on.

Tere Panuku was the name bestowed on the festival by Kingi Biddle, Pūkenga Mātauranga Māori (Māori Knowledge Specialist), in 2020.

In te reo Māori, the language spoken by the indigenous population of New Zealand, it translates to: to glide, soar and rise.

And in that spirit, as the 2022 festival takes off, so do the battles for the King and Queen of Crankworx and the Crankworx FMBA Slopestyle World Championship, and Emil Johansson’s chance to lock down the Triple Crown of Slopestyle. And, at the core of it all, five days of all round good times and glory for all those set to get amongst Crankworx Rotorua 2022, or follow the action from home on Red Bull TV.